posted by KoreanDogs.org team on July 9,2012 in News

Click the link above and watch the actual TV program. 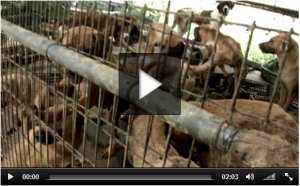 [Photo = Image capture from program broadcasted by JTBC]
While the controversy around the “disgusting food(dog meat)” doesn’t seem to end, dog meat soup is still popular as summer time health food. However, the sanitary condition of dog meat distribution in the field investigation by JTBC was appallingly messed up. Especially JTBC reported on July 1, that the suspicion is raised about the abandoned dogs being turning into dog meat.

A residential area near Cheongnyangni, Seoul. We entered an unidentifiable building with glass windows covered with green paper. Two dead dogs with guts spilled out are scattered around the floor, and in the fridge dogs that are discolored into dark red are hanging. An illegal dog slaughterhouse is openly operating in the middle of a residential area. Behind the compartment, live dogs are shaking as if they feel the fear of death.

Another slaughterhouse in Namyangju-city, Gyeonggido. As we enter the vinyl house rotten stink is unbearable. As we saw in the Cheongnyangni slaughterhouse, the slaughter area where the dogs are killed is right next to the live dogs with only a compartment in between them. This slaughterhouse was suppose to close down two years ago as a result of a reporting by an animal protection organization but the municipality did not take any further action. A Namyangju city official explained: “We don’t have the resources to pursue all these types of cases.”

An animal protection organization claimed that among the dogs being slaughtered are abandoned dogs sold from animal shelters. There are even suspicions that some shelters eat their own shelter dogs.

An animal shelter official said, “This is a dog head! These are duck wings. These are leftover from last time when we cooked and ate them.” Park, So – Yeon, director of CARE pointed out: “Animal shelters that are supposed to find suitable homes for the animals are sending them to just any homes or some shelters are even selling these dogs as meat and taking profits.

Dog meat surrounded by controversies between “disgusting food” and “summer time health food”. Even its distribution structure is marred by the illegal practice and lawlessness.