posted by KoreanDogs.org team on October 31,2016 in Uncategorized

“The greatness of a nation and its moral progress can be judged by the way its animals are treated.” -Mahatma Gandhi

“A small body of determined spirits, fired by an unquenchable faith in their mission, can alter the course of history.” – Mahatma Gandhi

“An ounce of practice is worth more than tons of preaching.” -Mahatma Gandhi

“As long as man continues to be the ruthless destroyer of lower living beings he will never know health or peace. For as long as men massacre animals, they will kill each other. Indeed, he who sows the seed of murder and pain cannot reap joy and love.” -Pythagoras

“Become the change you wish to see.” -Mahatma Gandhi

“Each one of us can do a little to bring some portion of misery to an end.” -Albert Schweitzer

“I am in favor of animal rights as well as human rights. That is the way of a whole human being.” -Abraham Lincoln

“If a man aspires towards a righteous life, his first act of abstinence is from injury to animals.” -Albert Einstein

“If liberty means anything at all, it means the right to tell people what they don’t want to hear.” -George Orwell

“If there is no struggle, there is no progress. Those who profess to favour freedom, and yet deprecate agitation, are people who want rain without thunder and lightening. They want the ocean without the roar of its many waters. Power concedes nothing without a demand. It never did and it never will.” -Frederick Douglass

“Never doubt that a small group of thoughtful, committed, citizens can change the world. Indeed, it is the only thing that ever has.” -Margaret Mead

“If you are neutral in situations of injustice, you have chosen the side of the oppressor.” -Desmond Tutu

“It’s a matter of taking the side of the weak against the strong, something the best people have always done.” -Harriet Beecher Stowe

“Life is as dear to the mute creature as it is to a man. Just as one wants happiness and fears pain, just as one wants to live and to die, so do other creatures.” -His Holiness The Dalai Lama

“Life is life–whether in a cat, or dog or man. There is no difference there between a cat or a man. The idea of difference is a human conception for man’s own advantage.” -Sri Aurobindo

“Non-violence leads to the highest ethics, which is the goal of all evolution. Until we stop harming all other living beings, we are still savages.” -Thomas A. Edison

“You cannot do a kindness too soon, for you never know how soon it will be too late.” -Ralph Waldo Emerson

“Our lives begin to end the day we become silent about things that matter.” -Martin Luther King, Jr.

“The proof that one truly believes is in action.” -Bayard Rustin

“The thinking person must oppose all cruel customs no matter how deeply rooted in tradition or surrounded by a halo…. We need a boundless ethic, which includes the animals also.” -Albert Schweitzer

“Think occasionally of the suffering of which you spare yourself the sight.” -Albert Schweitzer

“How wonderful it is that nobody need wait a single moment before starting to improve the world.” -Anne Frank

“We have enslaved the rest of the animal creation, and have treated our distant cousins in fur and feathers so badly that beyond doubt, if they were able to formulate a religion, they would depict the Devil in human form.” -William Ralph Inge

“When a man has pity on all living creatures then only is he noble.” -Buddha

“Man is not the lord of all the world’s animals. He is the protector.” -John Forsythe

“Truly man is the king of beasts, for his brutality exceeds theirs. We live by the death of others: we are burial places! I have from an early age abjured the use of meat, and the time will come when men such as I will look on the murder of animals as they now look on the murder of men.” -Leonardo da Vinci

“True benevolence or compassion, extends itself through the whole of existence and sympathizes with the distress of every creature capable of sensation.” -Joseph Addison

“They too, are created by the same loving hand of God which Created us…It is our duty to Protect Them and to promote their well-being.” -Mother Teresa

“A change is brought about because ordinary people do extraordinary things.” -Barak Obama

“Dogs are our link to paradise. They don’t know evil or jealousy or discontent. To sit with a dog on a hillside on a glorious afternoon is to be back in Eden, where doing nothing was not boring–it was peace.” -Milan Kundera

“Look your dog in her eyes- You cannot be sure she has no soul!” -Victor Hugo

“Dog meat consumption is an evil custom that doesn’t belong in a modern society as well as a vice harmful to the mental health of our citizens.” -Beopjeong Buddhist Priest (South Korea)

“Now I can look at you in peace; I don’t eat you anymore.” -Franz Kafka

“Only a life lived for others is worth living” – Albert Einstein

“The world is my country, all mankind are my brethren, and to do good is my religion” -Thomas Paine

“Never be afraid to raise your voice for honesty and truth and compassion against injustice and lying and greed. If people all over the world…would do this, it would change the earth.” -William Faulkner

“Never, never be afraid to do what’s right, especially if the well-being of a person or animal is at stake. Society’s punishments are small compared to the wounds we inflict on our soul when we look the other way.” -Martin Luther King, Jr.

“The question is not, “Can they reason?” nor, “Can they talk?” but “Can they suffer?” -Jeremy Bentham

“I hold that, the more helpless a creature, the more entitled it is to protection by man from the cruelty of man.” – Mahatma Gandhi

“All the arguments to prove man’s superiority cannot shatter this hard fact: In suffering, the animals are our equals.”-Peter Singer

“Those who have the privilege to know have the duty to act.” -Albert Einstein

“Act as if what you do makes a difference. It does.” -William James

“I have seen firsthand how injustice gets overlooked when the victims are powerless or vulnerable, when they have no one to speak up for them and no means of representing themselves to a higher authority. Animals are in precisely that position. Unless we are mindful of their interests and speak out loudly on their behalf, abuse and cruelty go unchallenged.” -Archbishop Desmond Tutu (Nobel Peace Prize Winner)

“Whoever is righteous has regard for the life of his beast, but the mercy of the wicked is cruel.” – Proverbs 12:10

“If you pick up a starving dog and make him prosperous he will not bite you. This is the principal difference between a dog and man.” -Mark Twain”

“I alone cannot change the world, but I can cast a stone across the waters to create many ripples.” – Mother Teresa

“Saving one dog won’t change the world, but surely, the whole world will change for that dog” -Unknown

“Each time a man stands up for an ideal, or acts to improve the lot of others, or strikes out against injustice, he sends forth a tiny ripple of hope, and those ripples build a current which can sweep down the mightiest walls of oppression and resistance.” -Robert F. Kennedy

“You cannot get through a single day without having an impact on the world around you. What you do makes a difference, and you have to decide what kind of difference you want to make.” -Jane Goodall

“Our prime purpose in this life is to help others. And if you can’t help them, at least don’t hurt them.” -Dalai Lama

“People who are crazy enough to think they can change the world, are the ones who do…” -Albert Einstein

“You can chain me, you can torture me, you can even destroy this body, but you will never imprison my mind.” -Mahatma Gandhi

“The more I know about people, the more I like my dog.” -Mark Twain

“The hands that help are holier than the lips that pray.” -R.G. Ingersoll

“One day the absurdity of the almost universal human belief in the slavery of other animals will be palpable. We shall then have discovered our souls and become worthier of sharing this planet with them.” -Rev. Martin Luther King, Jr.

“I care not much for a man’s religion whose dog or cat are not the better for it.” -Abraham Lincoln

“To be hopeful in bad times is not just foolishly romantic. It is based on the fact that human history is a history not only of cruelty, but also of compassion, sacrifice, courage, kindness.” -Howard Zinn
“We have to do the best we can. This is our sacred human responsibility.” – Albert Einstein

“I expect to pass through this world but once; any good thing, therefore, that I can do, or any kindness that I can show to my fellow creatures, let me do it now; let me not defer or neglect it, for I shall not pass this way again.” – Stephen Grellet

“In fact, if one person is unkind to an animal it is considered to be cruelty, but where a lot of people are unkind to animals, especially in the name of commerce, the cruelty is condoned and, once large sums of money are at stake, will be defended to the last by otherwise intelligent people.” -Ruth Harrison”

“We patronize them for their incompleteness, for their tragic fate for having taken form so far below ourselves. And therein do we err. For the animal shall not be measured by man. In a world older and more complete than ours, they move finished and complete… They are not brethren, they are not underlings: they are other nations, caught with ourselves in the net of life and time, fellow prisoners of the splendour and travail of the earth.” -Henry Beston

“The most beautiful people we have known are those who have known defeat, known suffering, known struggle, known loss, and have found their way out of the depths. These persons have an appreciation, a sensitivity, and an understanding of life that fills them with compassion, gentleness, and a deep loving concern. Beautiful people do not just happen.” -Elisabeth Kübler-Ross

“You have not lived today until you have done something for someone who can never repay you.” — John Bunyan

“That’s what I consider true generosity: You give your all and yet you always feel as if it costs you nothing.” — Simone de Beauvoir

“Compassion for animals is intimately connected with goodness of character; and it may be confidently asserted that he who is cruel to animals cannot be a good man.” ㅡ Schopenhauer.

“Unless someone like you cares a whole awful lot, Nothing is going to get better. It’s not.” ― Dr. Seuss, The Lorax

“Dripping water hollows out stone, not through force but through persistence.” ― Ovid

“You may never know what results come from your action. But if you do nothing, there will be no result.” ― Mahatma Gandhi

“To sin by silence, when they should protest, makes cowards of men.” ― Ella Wheeler Wilcox

“Protest beyond the law is not a departure from democracy; it is absolutely essential to it.” ― Howard Zinn

“If I were to remain silent, I’d be guilty of complicity.” ― Albert Einstein

“The dog meat industry is cruel and barbaric, where dogs suffer their whole lives. It is a shameful betrayal of animals who see humans as their guardians and companions and must be stopped.” – Giny Woo, KoreanDogs.org 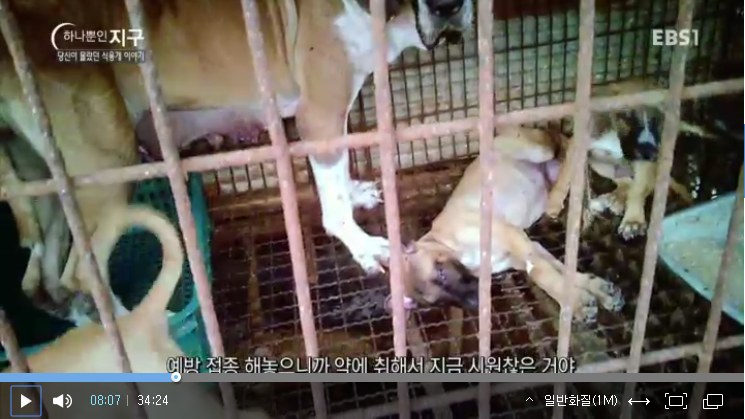 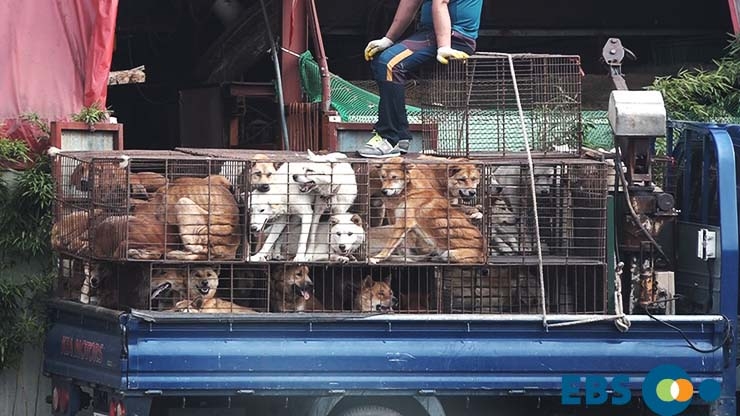