posted by KoreanDogs.org team on July 17,2015 in Action Alert, Campaign

In Gimcheon, a dog farmer seeks an administrative appeal to overturn a declined permit to operate, while at the same time a local member of the National Assembly delivers a congratulatory address at the inaugural ceremony of a local Dog Farmers Trade Association.

Do you remember a dog farm in Gimcheon, Gyeongsangbuk-do province that was trying to expand their current operation by purchasing a new site to build a massive scale dog farm? 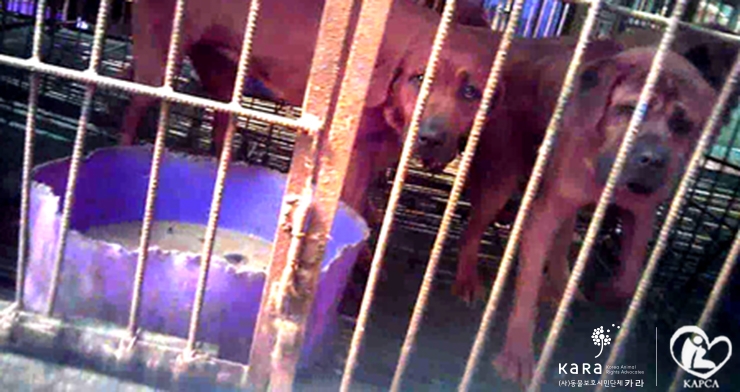 Korea Animals Rights Advocates (KARA) and Busan Korea Alliance for the Prevention of Cruelty to Animals (Busan KAPCA) visited this dog farm’s planned expansion site back in April, and desperately asked for your help.

→ Click to read [Urgent] Please help stop the meat dog farmer who is threatening to breed 1,000 dogs by performing vocal cord removal surgery on them!!!

And you did help! Many of you, including the local residents of Gimcheon, actively expressed opposition by filing civil complaints with the Civil Affairs Mediation Committee against the construction of this dog farm and, as a result, the new dog farm’s permit was declined. We have, however, received urgent notification that this dog farmer hasn’t given up despite the opposition of local residents and the decision of the City of Gimcheon. He is in the process of seeking an administrative appeal claiming that the City of Gimcheon declined his permit despite the fact that his facility is within the law in Gyeongsangbuk-do Province.

Meanwhile, the National Dog Farmers Trade Association, created by the dog farmers to protect their interests, actively supported the Gimcheon dog farm as an exemplary dog farm and 100% lawful, and submitted a petition to the City of Gimcheon defending it.

But they didn’t stop there. They filed two civil complaints with the Ministry of Agriculture, Food and Rural Affairs accusing KARA and Busan KAPCA of engaging in activity outside of what is “permitted for a Non-Governmental Organization” for helping the local residents who opposed the new dog farm construction to file their complaints.

As a result, we had to spend valuable time and effort preparing and submitting a detailed response to those civil complaints. That, however, is not an issue for us, as our activity as an animal protection organization was clearly lawful and is specified in our articles of association.

It is the reality of the miserable lives of these animals that breaks our hearts.
Once again, KARA and Busan KAPCA have confirmed the horror of the dog meat trade through the Gimcheon dog farm that has been venerated by the National Dog Farmers Trade Association as being an exemplary dog farm.

It is clear there will never be progress for our nation’s companion animal culture without first resolving the dog meat consumption issue.

This event very clearly illustrates why there are so many dog farms and why the problem with the dog farm industry is getting worse in Gimcheon. It explains why local residents say, “Gimcheon puts dog farms first, not the people.” According to the article, National Assemblyman Cheol-Woo Lee (Saenuri Party), in his congratulatory address at the ceremony, requested that “the organization do its best to represent the interests of the dog farmers in the current difficult environment, and to correct the misconceptions about dog meat through a public campaign so the consumption of dog meat can take its place in S. Korean society as a healthy culture”.

The National Assemblymen, for various reasons, often leave us at a loss for words, but Assemblyman Cheol-Woo Lee made us doubt our eyes and ears. The basis for the dog farmers’ claims that their farms are lawful is that the law governing the Livestock Excrement Treatment and Management states dog farms that are at least 60m2 in size must have an excrement treatment facility. Therefore, the dog farmers assert, as long as they can confirm they have such a facility, their dog farms are lawful.

While the Livestock Industry Act specifies dogs as livestock, this law only regulates the improvement or growth of the livestock. Simply having an excrement treatment facility does not make that dog farm, which is founded on the illegal slaughter and distribution of dogs for consumption, lawful.

Why, then, is the dog farmer (President of the Gimcheon Dog Farmers Trade Association) standing firm despite residential homes within 300m of the new site and opposition from the vineyard and plum orchard owners located directly across from the proposed farm?

Perhaps because they are confident that both the S. Korean and local governments, which have been ignoring the dog farms and the dog meat consumption issue, will once again take their side.

While the government and local agencies refuse to address this issue, and the animal protection groups are overwhelmed by the magnitude of this problem, dog farmers are forming trade associations and expanding their operations into massive corporate farming entities and evading the law. They are even protected by current National Assemblyman.

On the homepage of his website, Assemblyman Cheol-Woo Lee states, “Heaven gives humans only the amount of pain that we can endure,” expressing concern about the draught and its impact on the rice paddies and farm fields, the crops and orchard farming.

His concern, however, does not extend to the nearby residents of the dog farm who are worried about ruining their grape and plum orchards or the neighbors who have suffered for more than ten years because of the horrors of that farm.

Assemblyman Cheol-Woo Lee, can Gimcheon evolve into an innovative city with that kind of anachronistic mentality that promotes the dog meat industry? Can such a city rebuild its population to 150,000 when there are ongoing disputes over the dog farms and slaughterhouses?

Assemblyman Cheol-Woo Lee, you must first take care of the suffering of residents who are constantly worried about ruining their orchard farms and the surrounding environment because of the dog farm. We ask that you seriously consider keeping Gimcheon from becoming a backward dog farm heaven.

The Assemblyman’s homepage has a function that allows you to send a message directly to him. – Click to go to his homepage. Please send a polite and sincere message to the Assemblyman asking him to stand tall as a great leader and guide Gimcheon forward as a progressive and innovative city rather than drag it backward into a dog farm city.

“Dear Assemblyman Cheol-Woo Lee, please help Gimcheon recover its 150,000 population and become an innovative city with the ability to compete nationally in the grapes and plums market rather than the disgusting dog farms.

“Dear Assemblyman Cheol-Woo Lee, there are farmers who are not only worried about their orchard farming due to the draught but about a dog farm moving next door. Please help them so they don’t have to worry any more.”