posted by KoreanDogs.org team on August 27,2013 in Campaign, Event

Big thanks to the dedicated San Francisco Bay Area volunteers for organizing this event once again. The weather was perfect-warm and breezy. This was an America’s Cup Saturday so we expected a large crowd. However, because of the controversies around the changing of some rules before the race and the majority of teams withdrawing from the race in protest has left the race not as heavily attended. Still there were normal heavy foot traffic from all over the world as Fisherman’s Wharf is one of the most well known and visited place in San Francisco. Our volunteers were able to hand out approximately 150+ leaflets and talked to many people who said they didn’t know this went on in South Korea. Thousands more saw our displays as they walk by with surprised and shocked expressions on their face. For the first time, we brought our laptop to play the videos of STOP IT! KOREA’s undercover investigation but it was hard to see because of the bright outdoor sunlight. Despite the visibility issue, we still had the video playing for the whole duration of the event rotating from laptop to portable video player.

We talked to many people from all over the world-Italy, Mexico, UK, Australia, China,… – who were interested in helping the Korean dogs by going online and signing our petitions. Many of them thanked us for what we were doing. A vegetarian Indian couple was sad and shocked to find out about the plight of these dogs, they offered to help by raising awareness among their friends and families so we gave them a handful of our leaflets.

Many Koreans including a large group of Korean tourists walked pass our display but mostly they just walked by quietly without any acknowledgement or comments. It was disheartening to see many young Koreans walking pass giggling and laughing at our displays. However, we also met a young Korean guy who expressed a support for our cause and offered to help us by raising awareness about this issue among his Korean friends and communities. So we gave him a handful of leaflets, shook his hand and thanked him. He said he created the below petition which was able to reach threshold of 25K signatures. Oppose the petition created by “Hisa A”on Japan’s proposal to take Japan’s claim over Dokdo (or Takeshima) to the ICJ. We tried this US government petition few months ago for our Korean dog campaign as well but we were only able to reach around 6K signatures. Overall this was another successful event speaking out for the millions of dogs and thousands of cat in South Korea’s meat industry and hope that we were able to touch the hearts and minds of hundreds of people.

Anyone can stand up for the animals. It doesn’t take much-only a commitment to help and few minutes of your time. If you live in US and would like to hand out our leaflets in your city, we provide the leaflets to you free of charge. If you live outside of US, please still contact us and we will let you know if we can mail them to you at free of charge. 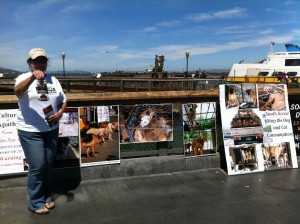 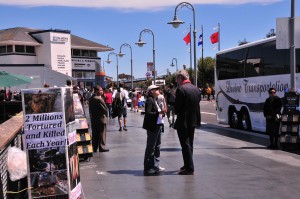 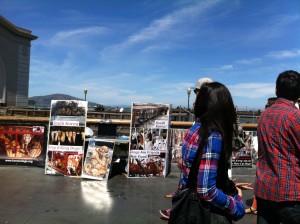 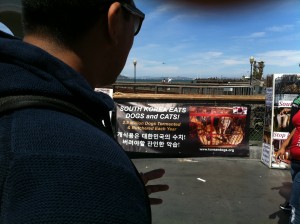 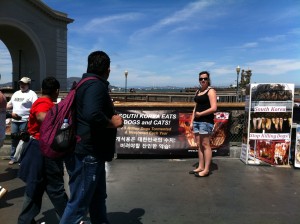 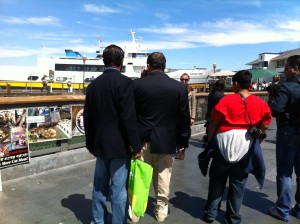 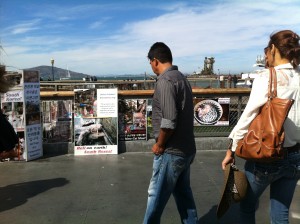 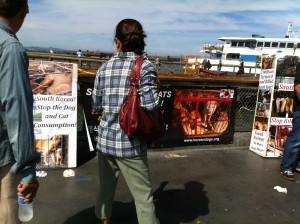 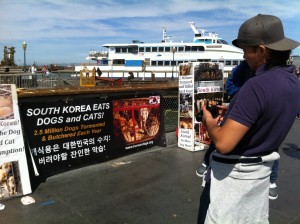 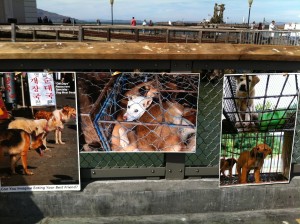 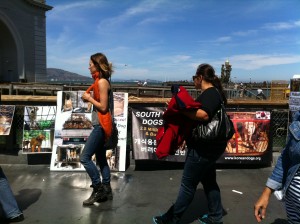 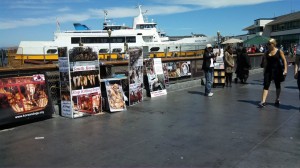 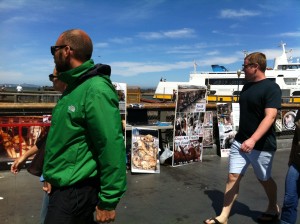