Kookje News reported on March 12, 2019 that “Busan Buk-gu district has commenced actions to shut down the operations of the Gupo Livestock (Dog Meat) Market before Boknal (the hottest days of the summer). However, it is unclear how effective this will be.”

This is positive news coming from Busan regarding the notorious Gupo Dog Meat Market. But there are still many challenges to face ahead in order to shut it down completely and, as history has repeatedly shown, it is incredibly difficult to change the mentality of the Korean government about animal welfare, which is still firmly stuck in the stone ages! Furthermore, the Busan Gupo Dog Meat Market is only a small part of the whole dog meat industry in Busan (Korean internet search results recently revealed 566 Health Food Shops and 263 dog meat restaurants in the vicinity of Busan) and all over South Korea. This is why we must keep the pressure on the Busan and Busan Buk-gu district government as well as each government entity in South Korea to shut down the vile and extremely cruel dog and cat meat industry for good.

Only your actions can help make that possible. Click HERE to take the actions today.
Click HERE for more actions you can take.
Thank you for caring! 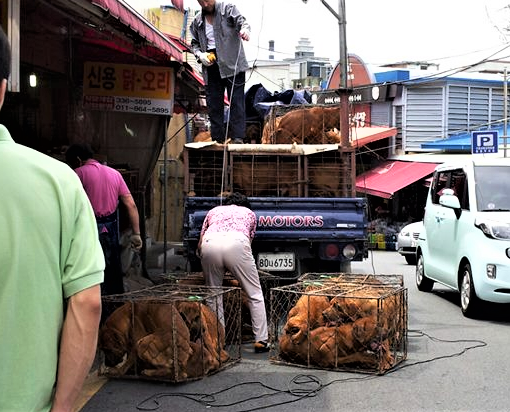 Speed up: (1) the establishment of ordinances, (2) organization of a supplementary budget of 700 million won, and (3) the securing of city and governmental financial support

Busan Buk-gu district has commenced actions to shut down the operations of the Gupo Livestock (Dog Meat) Market before Boknal (the hottest days of the summer). However, it is unclear how effective this will be.

The reorganization of the Gupo Livestock market has been a long-desired ambition for the Buk-gu district. However, because of the astronomical budget needed, the district had been unable to proceed on its own and had been stalling until local elections last year led to renewed interest on the project. Busan Mayor Oh Keo-Don and Buk-gu District Head Official Jeong Myeong-Hui have agreed to cooperate to improve the conditions of the livestock market. The city has committed 19.9 billion won (approximately $17.5 million USD) to establish urban planning facilities, which includes a parking lot, a small park and a citizens’ recreation facility, within the livestock market and has secured a national budget of 6 billion won.

The city and district governments have cooperated to secure a budget and the reorganization of the Gupo Livestock Market is proceeding as planned. In addition, the Buk-gu district has enacted new ordinances to speed up the reorganization and committed nearly 700 million won (approximately $616,000 USD) despite limited financial resources.

The Buk-gu district will pay 1.8 million won (approximately $1,600 USD) in living allowance every month for 20 months to 19 businesses currently in operation, until the newly planned shopping center is established. A Buk-gu district official has stated, “In order to receive the living allowance in a timely manner an agreement must be made before the compensation for the urban planning facilities are completed.”

However, it is unclear whether these plans will proceed as planned. There are still differences on opinion regarding the compensation and negotiation method between the city and the merchants. Additionally, there are differences on opinion within the city council, with several council members thinking the actions are too hasty. Park Yong-Soon, chairman of the Gupo Livestock Market Association, has stated, “I am grateful that the city has enacted ordinances and committed a budget to provide living allowance for the merchants” but “I hope the district will proceed with settlement negotiations as requested by the merchants to resolve points of dispute quickly.” A city council member, Baek Jong-Hak (Liberty Korea Party) stated, “I plan to review the ordinances and proposed supplementary budget in a positive light if it is proposed to the standing committee, but I am worried that the district is proceeding too hastily. I have my concerns on why we need to proceed so quickly.”

The Buk-gu district plans to initially focus on persuading the council to pass the ordinances and proposed budget, and then negotiate with merchants. A Buk-gu official stated, “If the ordinance and proposed budget pass the council, we will negotiate with merchants on this basis and plan to reorganize the livestock market before the hottest days of summer.”