posted by KoreanDogs.org team on December 9,2013 in Campaign, News

This is a translation of the December 9th, 2013 news on Busan Ilbo: Busan KAPCA demands “demolition of dog slaughterhouse” in operation for over 20 years on a land owned by the Northern District government of Busan.

Busan KAPCA (Busan Korea Alliance for the Prevention of Cruelty to Animals) demands “demolition of dog slaughterhouse” in operation for over 20 years on a land owned by the Northern District government of Busan.

It has come to light that dog slaughter has been taking place for over 20 years on a land inside Gupo Market that is owned by the Busan northern district government sparking controversy.

According to the northern district government, a “health food center” that sells dog elixir (dog soju) has been occupying 52㎡ of land that is owned and maintained by the district office for the past 20 years. The district office imposes indemnity on this place every year based on the official land price and 4.95 million Korean won ($ 4,700 USD) was imposed for this year.

The owner of this “health food center”, Choi OO, explained that mass slaughtering did not take place. Choi OO stated, “We don’t kill dogs in front of other dogs and we have been paying the rent on time. We display live dogs in front to help promote our business but if people thinks it’s disgusting than we will cover up the cages.”

The northern district office’s position is that if you cannot capture the scene of killing with cruel methods, it’s difficult to bring charges against the “health food center” for animal cruelty.
An official at the northern district office economic development department stated, “last year the court had ruled that the killing of dogs itself is not illegal. Because the law does not specifically define the acts of cruelty, it’s difficult to punish someone for the violation of animal protection law.”

Regarding the issue of building being illegal, the district office responded that they will not demolish it taking into consideration of the facts that the land in question is small and the “health food center” at this traditional market is not against the public’s interest. Ji-Yeon Song reports. 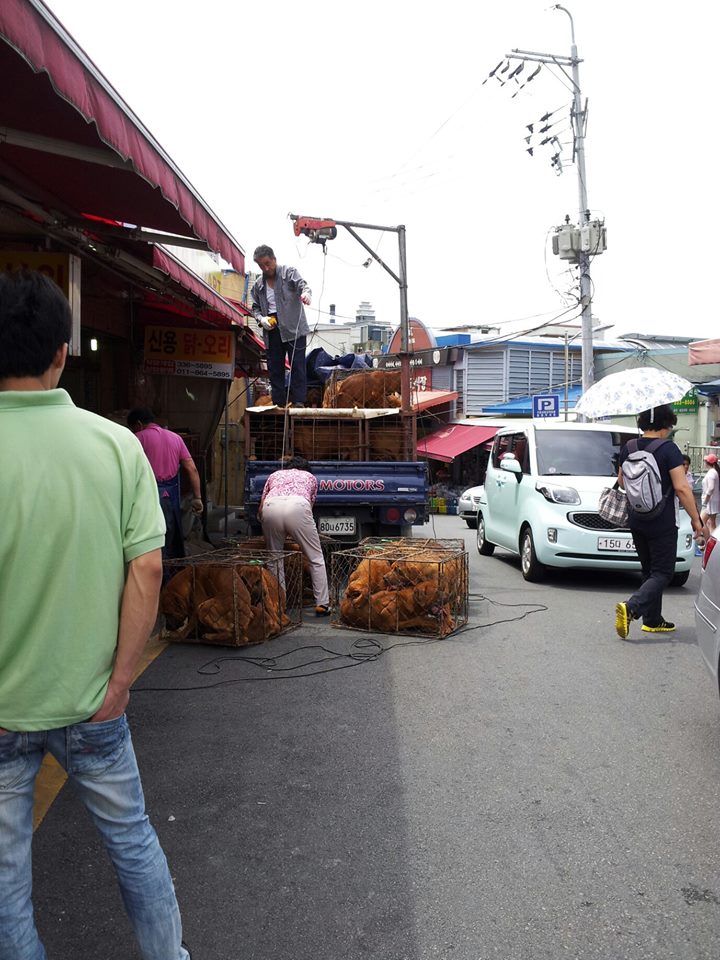 Gupo Market on Chobok (7/13/2013), first of the 3 hottest days of the summer when the dog meat consumption peaks in S. Korea. Photo: Busan KAPCA