Busan Gijang: Sledgehammer blow to the neck not cruel?

posted by KoreanDogs.org team on November 15,2013 in Campaign, News

This is a translation of the November 5th, 2013 posting on Busan KAPCA(Busan Korea Alliance for the Prevention of Cruelty to Animals)’s website: Busan Gijang: Sledgehammer blow to the neck not cruel?

We received a tip about a dog farm located near an apartment complex from one of our members in Gijang-gun in Busan, so we visited this place with a representative from the Gijang district office.

Inside there were raised dog cages and a slaughterhouse. In addition, there was evidence of slaughter as pots used to boil dog meat to make dog elixirs and the finished products were seen.

After hearing from the local residents that dog slaughter takes place around 4 or 5am, our team leader staked out the location. When the lights came on, he called the police and conducted the raid.

At the scene, there were dead bodies of dogs that were just slaughtered and blowtorched… There was blood all over the floor. The perpetrator admitted that he just killed that dog by taking a sledgehammer to its neck.

At first, after his admission, we requested that the perpetrator be prosecuted for the violation of Animal Protection Act. However, the police contacted us the next day and told us that they are not sure if there was a clear-cut violation of this law and that prosecution would be difficult.

However, the police are saying that the act of killing by a sledgehammer blow to the neck and blowtorching does not qualify as a “cruel method” in the provisions of Article 8, (1) 1 and therefore it is difficult to apply this law.
The police are saying that it’s a good way to kill with minimum suffering, and therefore they decided that this way of killing is not cruel.
Then what is a cruel method? How should they be killed in order for it to be considered a cruel method?
Please write to the Busan Gijang Police and request a proper and thorough investigation of this case.
We must not just sit and watch this animal abuser set free.
Civil complaint to Police Call Center 182
Write to the Busan Gijang Police

Below are photos from this case.
There are many gruesome photos so we advise that you do not look at these photos if you are elderly, weak or have a fragile heart. 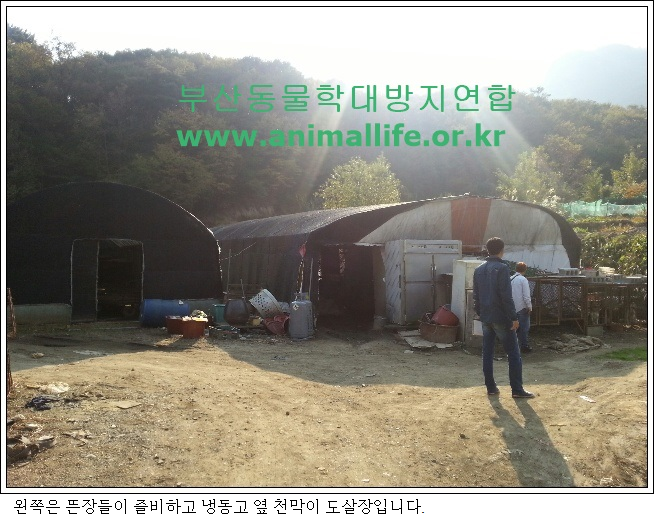 On the left there were many raised dog cages in rows, and the tent next to the freezer is the slaughterhouse. 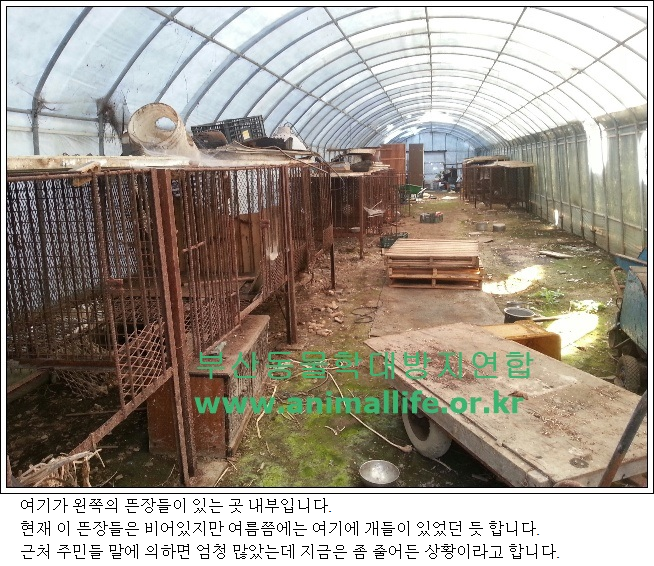 This is the inside of the tent where the raised dog cages are. Although these cages are empty currently, it looks like there were dogs here in the summer time. According to the local residents, there were many dogs in this place but the number has been reduced recently. 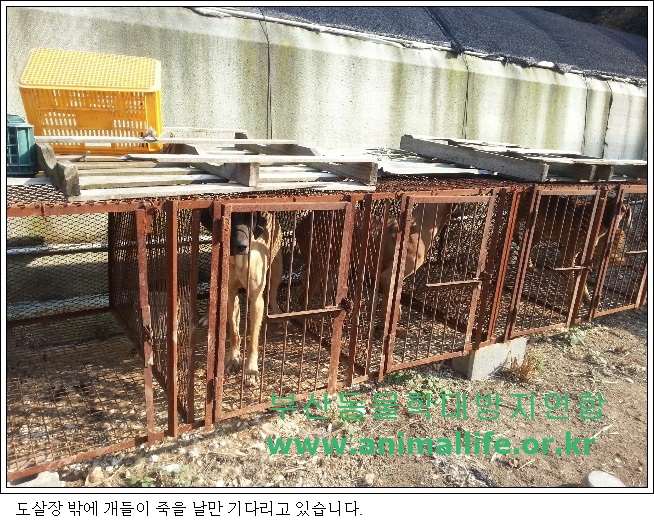 Outside the slaughterhouse, these dogs helplessly wait for their death. 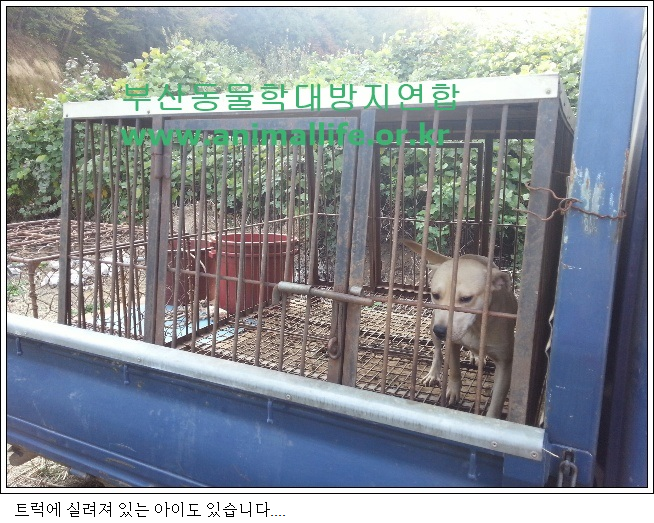 There’s a dog on a truck as well…. 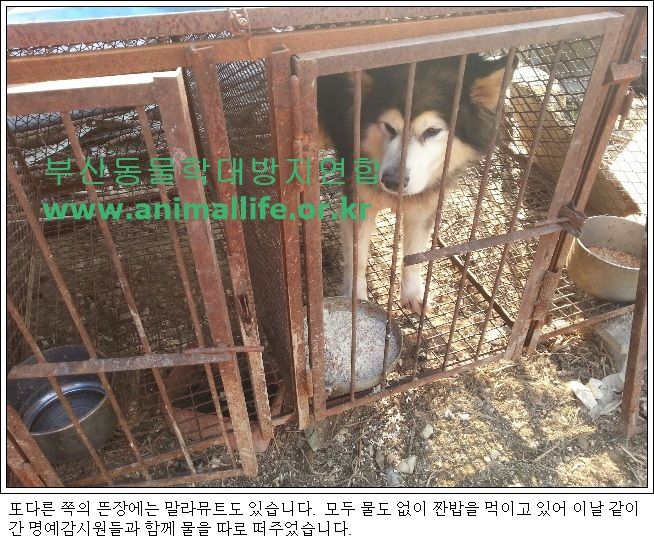 There’s a Malamute in another cage. They were being fed salty rotting food waste so the honorary animal protection inspector who accompanied us and we gave them water. 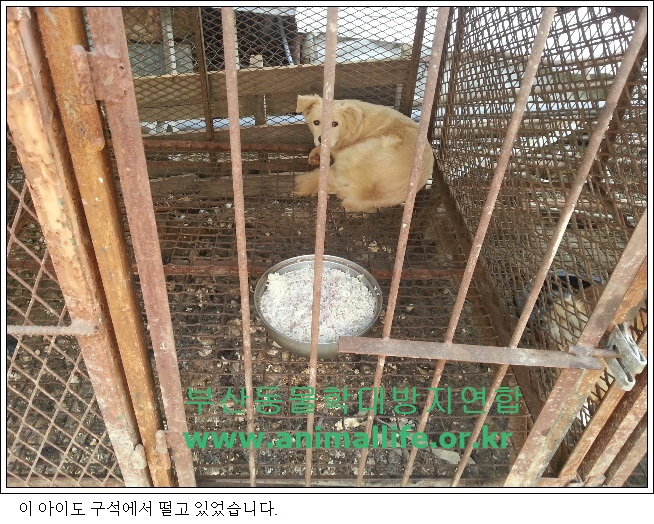 This one is trembling in fear in the corner. 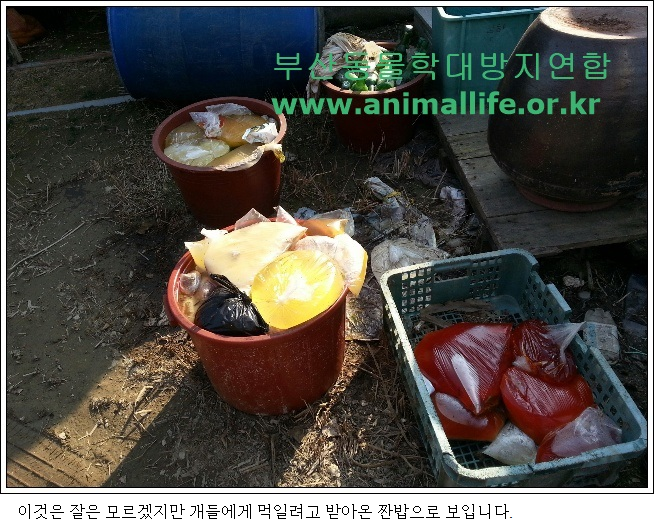 We are not so sure what these are but it seems to be food waste collected to feed the dogs. 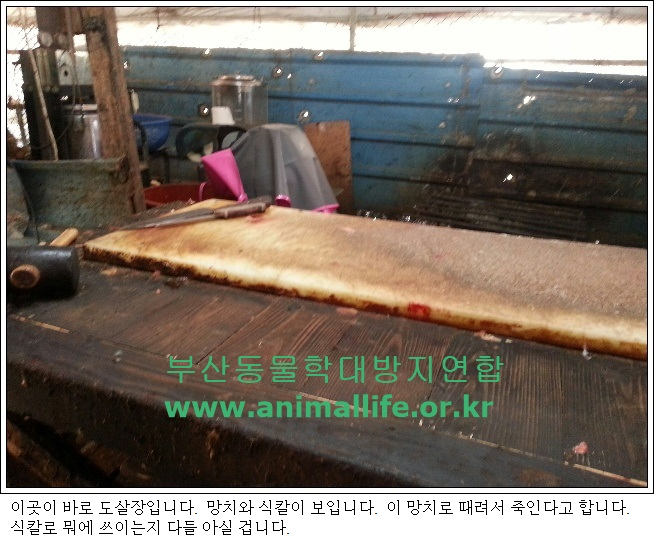 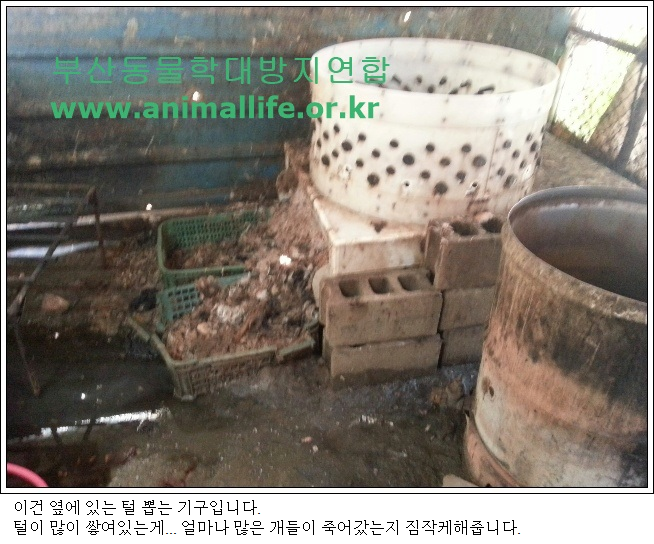 This is a fur removal rotating drum. We can guess how many dogs met their death here by the way fur is piled up high. 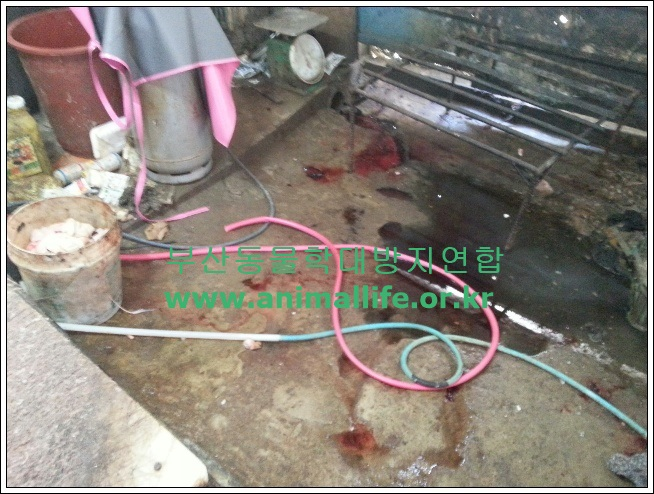 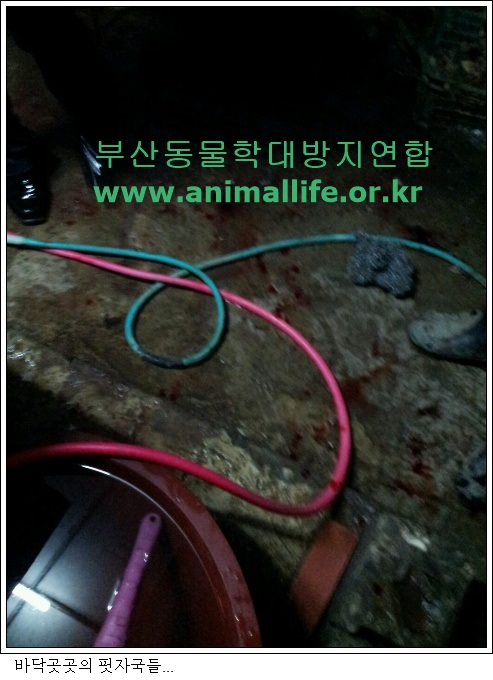 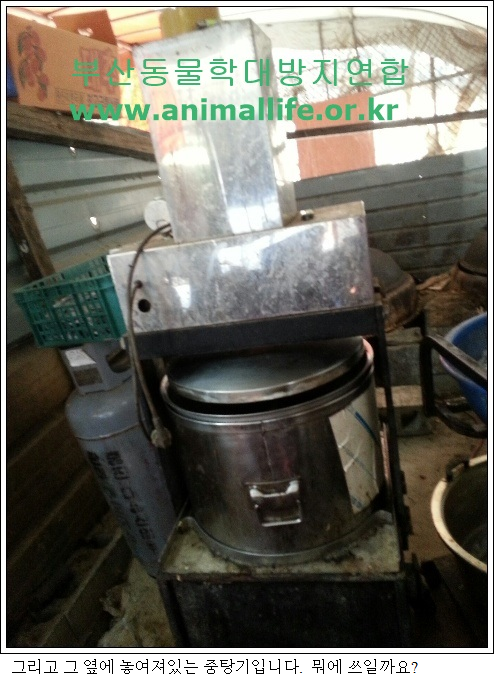 And then there is this boiling pot. Can you guess what this is used for? 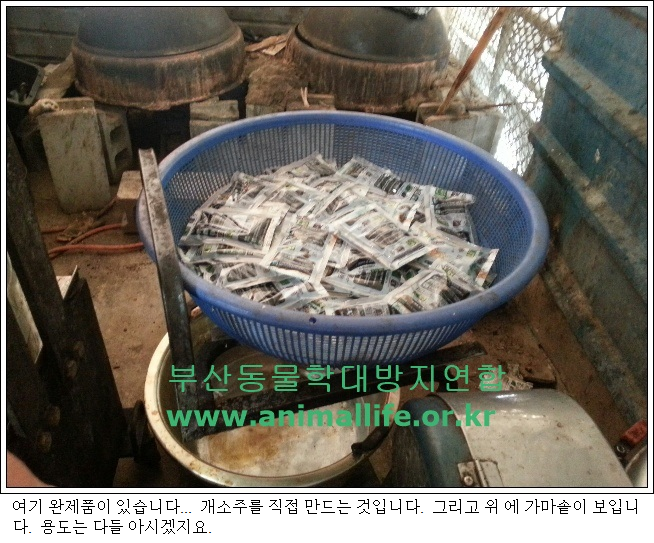 These are the finished products. They even make the dog elixirs (called “dog soju”) themselves. You can see the cauldrons too. You already know what those are used for. 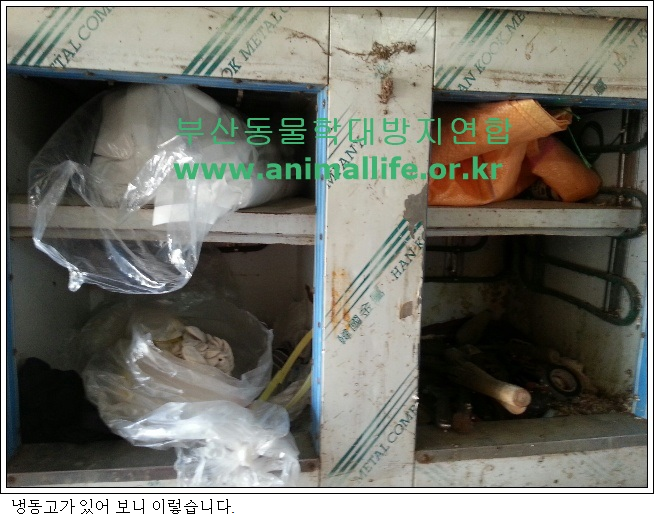 We looked inside the freezer and this is what it looks like. 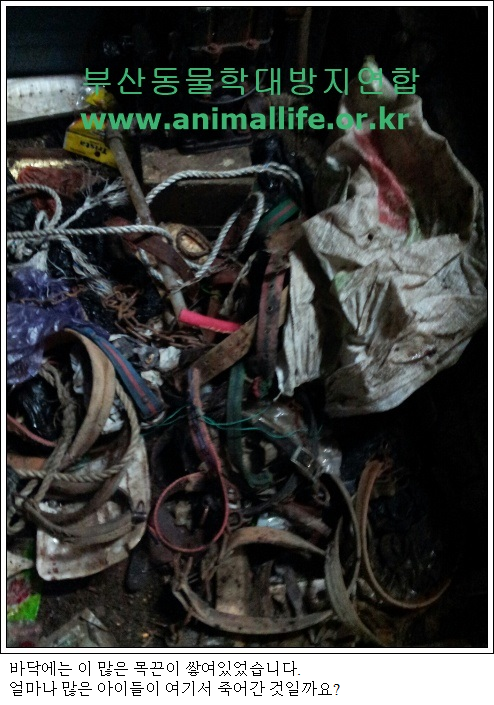 All these collars were piled up on the floor. How many dogs would have lost their lives here?

We made these observation during our visit in the afternoon. And then early in the dawn, we conducted a raid by staking out this place. 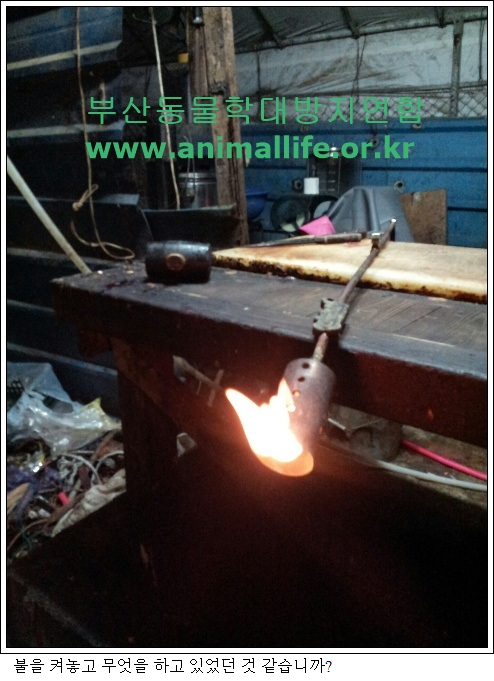 With the blowtorch lighted, what do you think they were doing? 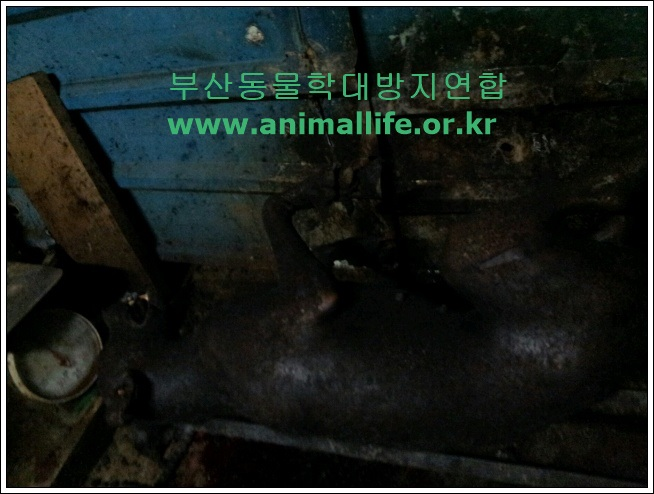 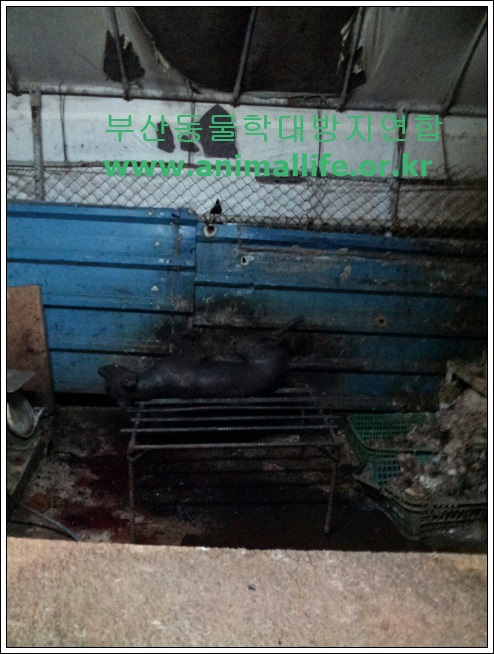 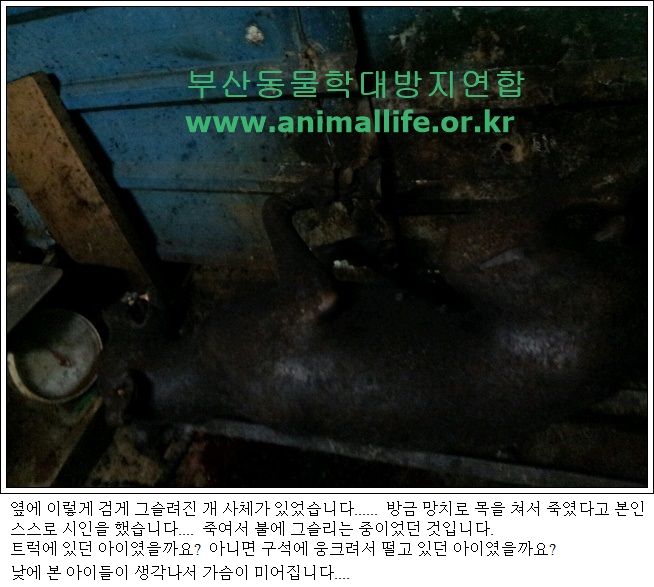 There was this blowtorched body of a dog all burned to black…… The perpetrator admitted that he just killed him by a blow to the neck with a sledgehammer… He was in the middle of blowtorching him when he was caught. Could this be the dog that was in the truck? Or would it be the one that was trembling in fear in the corner? We are heartbroken with the images of the dogs that we saw in the afternoon running through our heads. 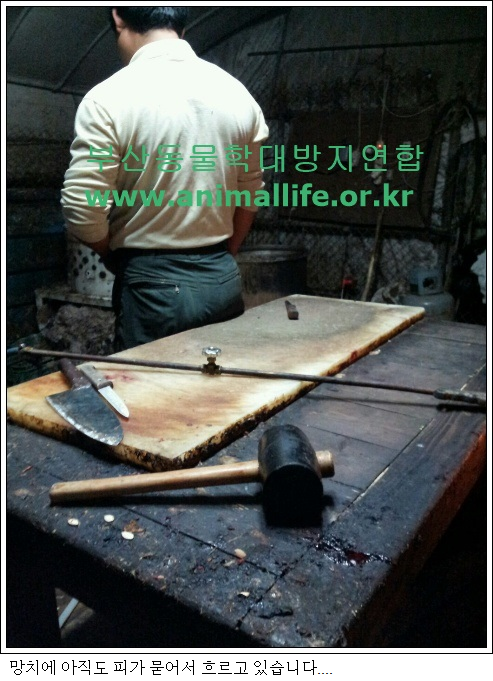 There’s still blood stain on the sledgehammer flowing on to the table.

Even with such a gruesome scene the police are saying that the Animal Protection Act is not applicable.
They told us that they consulted the Gijang-gun district office and the Ministry of Agriculture, Food and Affairs and that they were told that the law cannot be applied in this case.
So we called these two government offices to verify and they both said that they did not talk to the police.
How cruel does the killing have to be in order to be defined as animal cruelty?
Please write to the Busan Gijang Police and demand a proper investigation of this case.
Civil complaint to Police Call Center 182
Write to the Busan Gijang Police

If we don’t take action, nothing will change.
Sign Petition!