posted by KoreanDogs.org team on May 2,2013 in News

A group that used pigs died of diseases as feed for dogs and distributed these dogs as meat nationwide was arrested.
On May 2, 2013, according to the Jeju Western police, pig farmer Mr. G (45. Jeju) and dog breeder Mr. C (38, Busan) were booked for the violation of Domestic Animal Infectious Disease Control Law and Wastes Control Act for feeding dead pigs to dogs and distributing these dogs as meat.
From May 2011 until April of this year, Mr. G transferred more than 3,000 pigs died of infectious diseases from his farm ‘A’ located at Jeju, Hallim-eup, Geumak-ri to dog breeder Mr. C.
Mr. C began breeding dogs in 2007 at his farm ‘B’ in Jeju, Hangyeong-myeon and to reduce the cost of dog feed, took in Mr. G’s dead pigs for free and used them to feed his dogs.
And he distributed 80% of these dogs fed on dead pigs to traditional market in Gyeonggi-province as well as nationwide.
The police estimates that at least 750 dogs were distributed.
The police confirmed that bacterial infections, such as Salmonella, E. coli were found in the samples of dead pigs tested.
Lacking statues for penalties, the police advised a course for legislative supplementary measures to the Ministry of Food, Agriculture, Forestry and Fisheries.
The police is expending their investigation on the dog breeder’s trading partners by seizing his trade records. 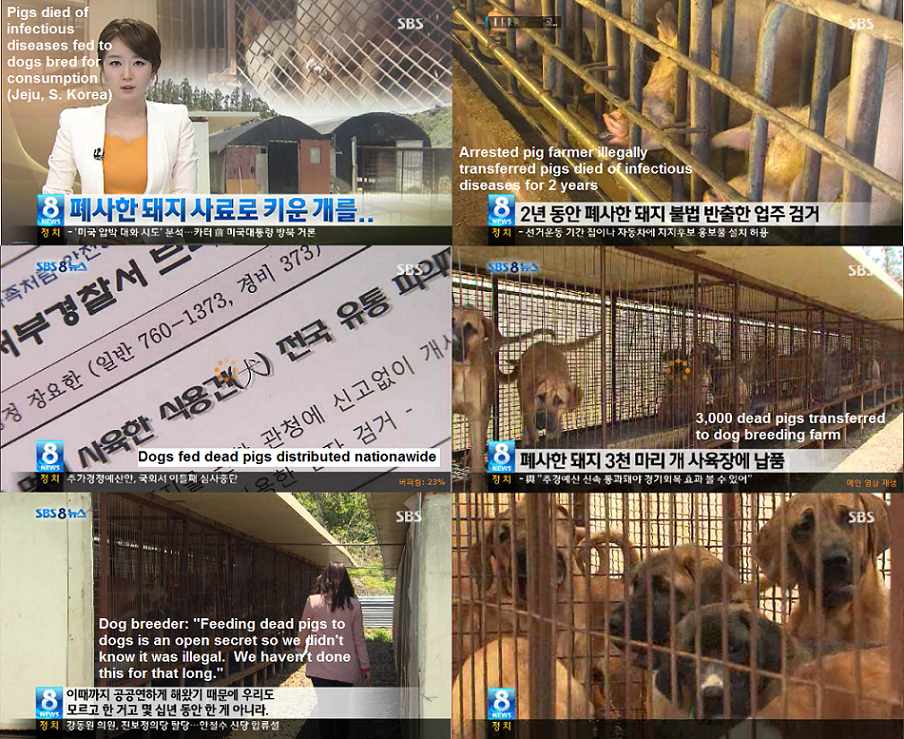 Source: http://www.sisajeju.com/news/articleView.html?idxno=181784
Photo from the dog farm that fed pigs dead from infectious diseases during the investigation, Jeju, S. Korea.