From KARA: Great news has arrived!

posted by KoreanDogs.org team on April 17,2014 in Campaign, News

This is a translation of posting on KARA(Korea Animal Rights Advocates)’s website: Great news has arrived! The Prosecutor’s Office has decided to investigate the Busan area illegal breeding farms. 3/28/2014

1. We filed bills of indictment for the Dongsan and Bani illegal breeding farms in Busan. 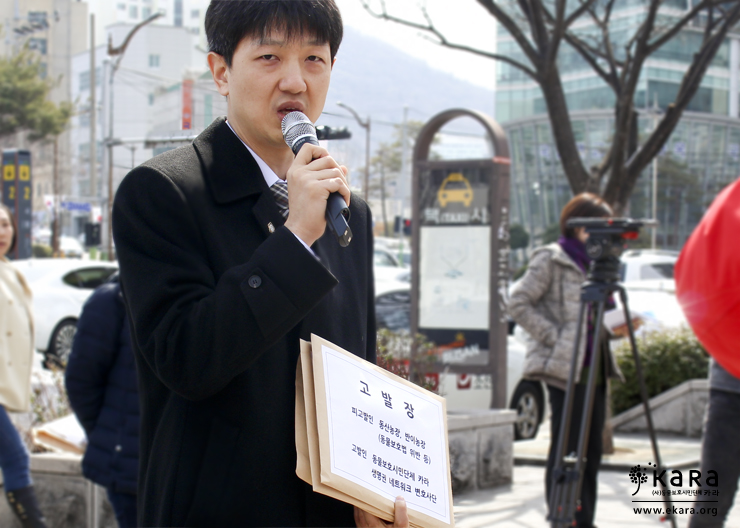 Photo: KARA. KARA and Right to Life Network of Attorneys filing bill of indictment against Bani Farm and Dongsan Farm in Busan.

2. Decision by the Prosecutor’s Office:

On March 26th , we received a notice that these cases will be investigated directly by the Busan District Public Prosecutor’s Office and not by the police. Direct investigation by the Prosecutor’s Office was only used for big cases in the past and this is the first time that it will be conducted for cases related to animal protection. Therefore this is very exceptional. They also stated that they plan to thoroughly investigate the animal cruelty committed through corporate farming breeding processes reported on our bills of indictment. This is a splendid achievement that breaks the existing practice that treats animal cruelty as merely a summary indictment (misdemeanor). We are thankful and supportive of the Busan District Public Prosecutor’s Office. 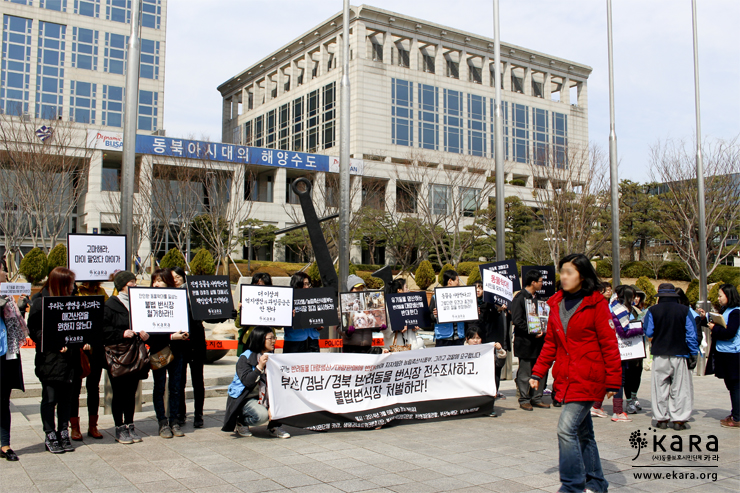 The Busan Metropolitan City Government informed us how the two breeding farms cases we reported were handled. They also indicated their position that from now on they will try their best to eradicate the illegal activities through ongoing investigations of illegal animal breeding and the distribution industry. In addition, the Geumjeonggu District told us that they will do their best to crackdown on the illegal activities of animal related businesses and the breeding farms within the livestock breeding restricted area and to promote an environment for animal welfare. 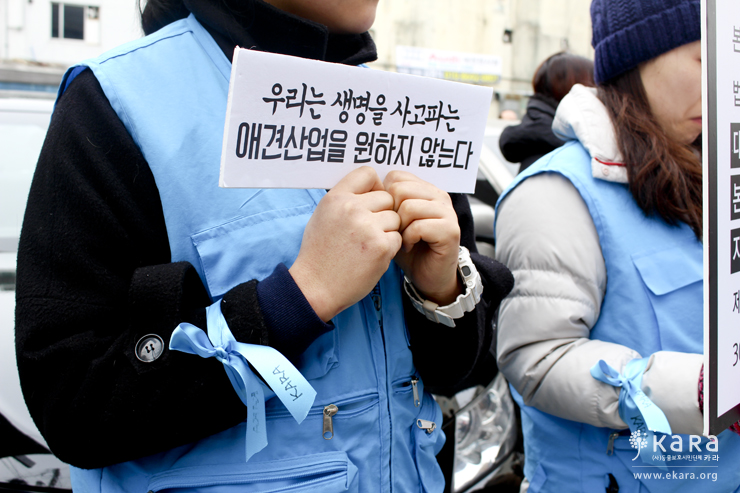 Photo: KARA. Protest in front of Busan Metropolitan City Government office. "We do not want Pet Dog Industry that sells and buys lives."

Today’s results were possible because of those who have travelled all the way to Busan to protest, those who could not join us physically but supported and encouraged us in this fight, the members of the Busan Korea Alliance for the Prevention of Cruelty to Animals(Busan KAPCA), the Busan Green Party, the Busan Alliance for the Environment and the Busan Green Alliance.
We sincerely thank you!
And thank you to the Busan Metropolitan City, Geumjeonggu District Office and the Busan District Public Prosecutor’s Office.

KARA has conducted a lengthy investigation of illegal breeding farms/auction markets/dog slaughterhouses. It was an enormous task that covered Seoul, the Gyeonggido province, Daejeon, and the Gyeongnam province. It was a journey of agony and sorrow, but the sense of duty that we will find a breakthrough to resolve the fundamental problem had kept us going with the breeding farms as starting point. Starting with the Gyeongseo Auction Market, we are currently in the process of preparing for a bill of indictment for the Daejeon Auction Market, Busan breeding farm and the auction market. We will also continue our memorial ceremony and protests around the country. In addition, we will distribute parts one and two of the [Illegal Breeding/Auction/Slaughter Report] that summarizes the results of our investigation.

We need your help to end the horrendous cycle of evil.
It is your interest and support that will save the animals from cruelty.