Home / Blog / Gangjin’s response to our petition on e-People

Gangjin’s response to our petition on e-People

posted by KoreanDogs.org team on February 5,2019 in Action Alert, Campaign 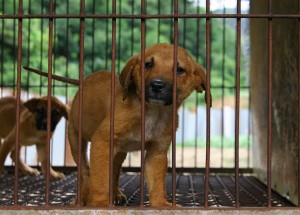 Below is Gangjin’s response to our petition: Gangjin, South Korea, Shut down the illegal dog meat farms, slaughterhouses and markets.

With regard to your petition requesting the shutdown of illegal dog farms, slaughterhouses, markets, and restaurants, dogs for thousands of years, have lived with human beings and have been used for hunting, protecting homes, and during periods of natural disaster, when there was not enough food to eat, as meat.

– This situation is a problem throughout the whole of Korea, therefore; the prohibition of dogs for human consumption cannot be dealt with under the Animal Protection Act, Livestock Industry Act and Livestock Products Sanitary Control Act. As the number of dogs kept as pets and companion animals grows rapidly due to the fast growth in the population of small families and people living alone, it is anticipated that this debate will continue in the future.

– The act of feeding these dogs by the unauthorized processing of food waste and garbage; the harm that the feces produced in the dog meat farming industry plays in the surrounding environment; the exhibition and sale of dogs in traditional open air markets; the selling of dog meat soup with dog meat from unknown sources that you have mentioned, are all far from Korean’s sentiments and it is not taking place at all in our county.

– One more misunderstanding you mentioned is that the Article 7 (1) of the Livestock Products Sanitary Control Act states that dogs are classified as animals that are prohibited from slaughtering. The law is stated as below.

(1) Slaughter and treatment of livestock, collection of milk, and processing, packaging and storage of livestock products shall be conducted in a place of work permitted under Article 22 (1): Provided, That this shall not apply to any of the following cases:

1. Where livestock is slaughtered or treated for scientific research;

3. Where an owner slaughters or treats such livestock for the direct cooking and sales of it to consumers (hereinafter referred to as “in-house cooking and sale”) at the relevant place in the area where a Mayor/Do Governor determines and publicly announces the classification of livestock by species, excluding cattle, horses, swine, and sheep.

– Article 8 of the Animal Protection Act describes the prohibition of animal abuse, and Article 10 refers to how animals are slaughtered.
Although it is reality that dogs are slaughtered for an individual’s consumption and there is no way to sanction this by law, but under the Article 8 of the Animal Protection Act, killing by cruel methods such as hanging by the neck, killing in street or in public, or in front of other animals is prohibited therefore, if these methods of killing are used, we are able to clamp down.

3. Thank you for your interest in the dog slaughtering issue, and if you have any questions, please contact the Gangjin-gun Environmental Livestock Division (☎061-430-3613) and I would be glad to answer your questions. Thank you. 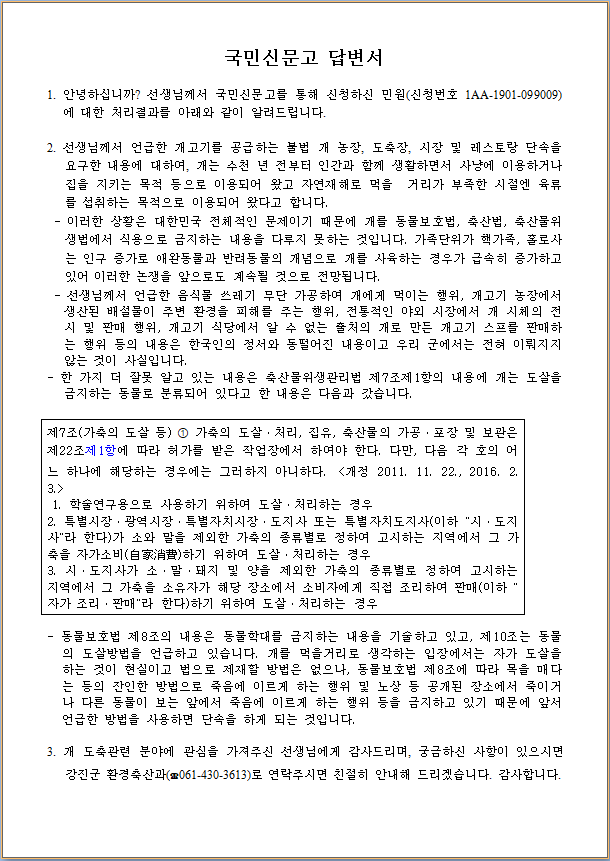 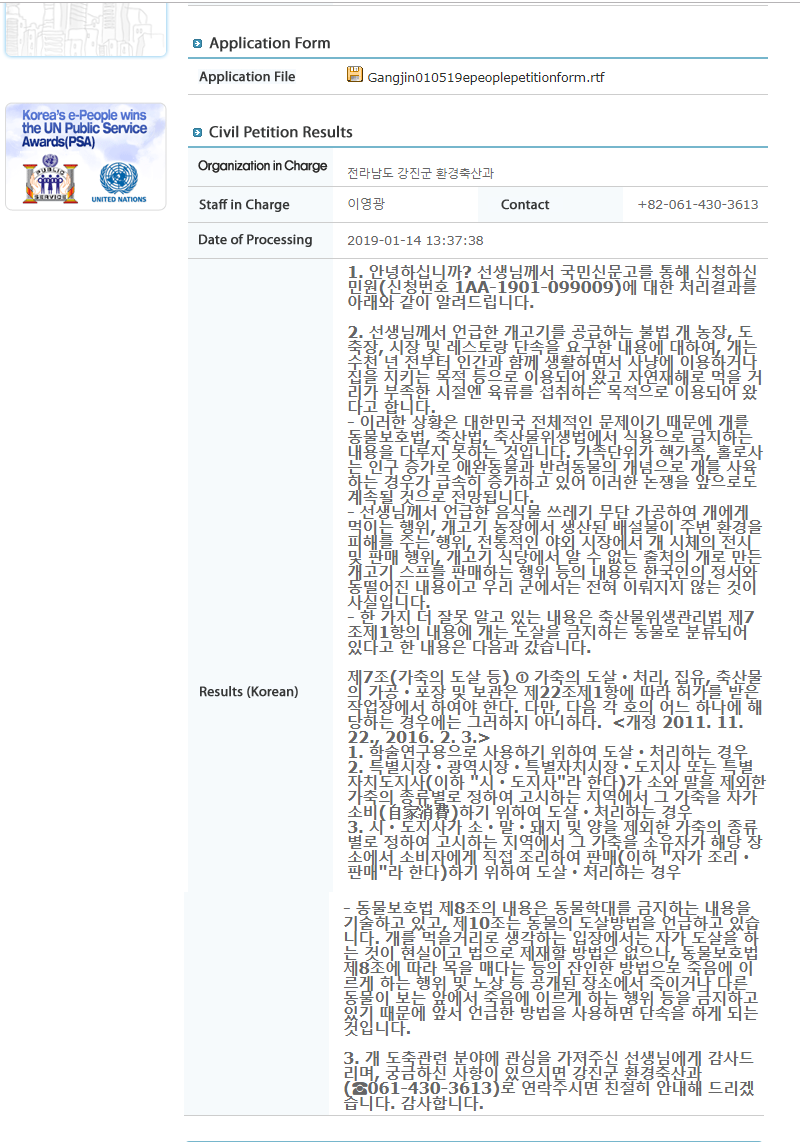 it fails to substantiate and evidence what direct actions the Gangjin County is taking to enforce existing laws to disrupt the entrenched dog meat trade in South Korea. We have not been provided, in this response, with any evidence of any direct actions taken by the Gangjin County, such as recorded information relating to inspections, monitoring and actual enforcement action taken against violators, in relation to dog meat farming, slaughterhouses and businesses selling dog meat and dog meat products (such as dog elixir and dog soju);

it fails to show what actions the Gangjin County is taking with regard to proposing amendments to existing legislation or bringing in new legislation to address and end the dog and cat meat trade, and 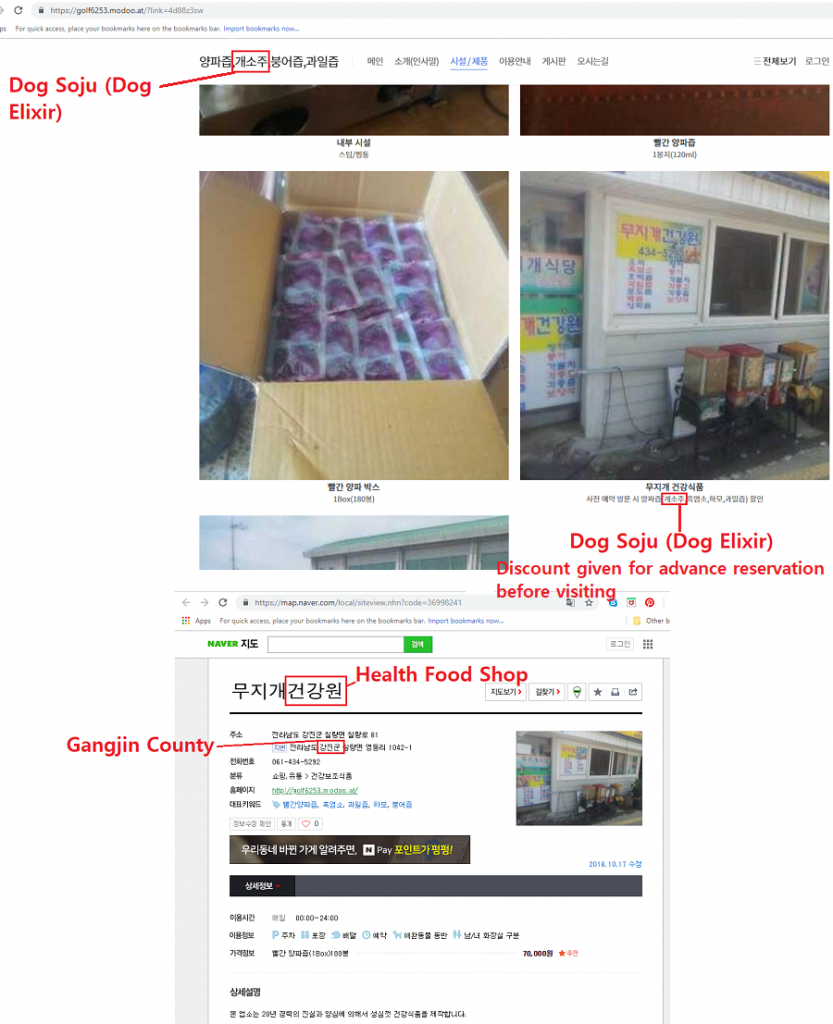