[Urgent] Please help stop the meat dog farmer who is threatening to breed 1,000 dogs by performing vocal cord removal surgery on them!!!

This is translation of a campaign posted on the Busan Korea Alliance for Prevention of Cruelty to Animals(Busan KAPCA)’s website on March 16, 2015.

[Urgent] Please help stop the meat dog farmer who is threatening to breed 1,000 dogs by performing vocal cord removal surgery on them!!!

Currently, about 600 dogs are being bred for human consumption on this dog farm. A high fence surrounds the property and inside are many rows of large vinyl houses completely covered with black shading net. This area where the dog farm exists is known as a ‘Livestock Breeding Restricted Area.’ 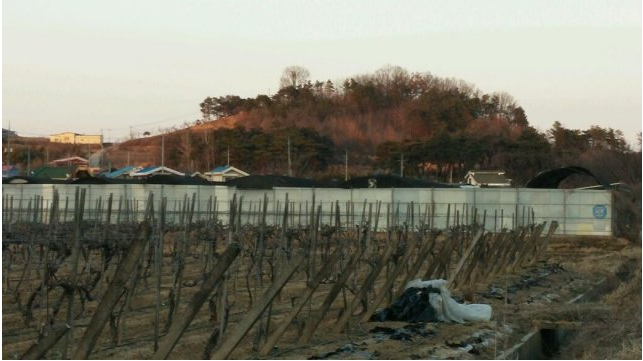 Behind the dog farm several private homes are visible. There is a reservoir about 500m away and a park has been created for the local residents.

We asked the City of Gimcheon how this very large-scale dog farm continued to exist year after year in an area where livestock breeding is restricted and private homes are nearby.

This was the City of Gimcheon’s response:

“There was a septic system and at the initial inspection we confirmed the installation and all equipment conformed to the law. There have been no further inspections. It is not possible to take any administrative action because this dog farm was built before the area was designated as a “Livestock Breeding Restricted Area.“

An issue of greater concern is that this dog farm is attempting to expand its current operation by moving to a new location or build a branch farm at another location. An application for a building permit has already been submitted to the City of Gimcheon requesting approval to expand their operation at a nearby site.

Meanwhile, a petition, signed by the entire village where the dog farmer is planning his move except for the village head and three elderly hard-of-hearing women, was submitted to the City asking that the building permit be denied and no dog farm be built in their town.

Then, we have been informed that the dog farmer has declare that “if the petition citing concerns over noises from the dogs becomes a problem, he will perform vocal cord removal surgery on all 600 – 1,000 dogs on the farm.”

Despite the fact that the site for the new dog farm is as close as 600 meters from private residences, the City of Gimcheon states they cannot legally block the application for the dog farm building permit because the proposed farm is not within the 500 meters that would designate the location as a Livestock Breeding Restricted Area.

This dog farmer, who has been successfully operating a dog farm in a legally restricted area, is attempting to pull the same shameful dirty trick once again.

In Germany, the law prevents removal of a dog’s vocal cords.

The Korean Animal Protection Act in part declares that an animal must be allowed to maintain its natural behaviors. Laws are being amended one after another to prohibit animal cruelty such as castration and tail cropping, procedures that at one time were practiced regularly.

For dogs, barking is absolutely necessary for communication with other dogs and with humans; it is a very natural behavior. And this mere dog farmer is declaring to villagers and authorities alike that he personally will perpetrate this clear act of animal cruelty – vocal cord removal surgery – on all 600 – 1000 dogs? This meat dog farmer is mocking our nation’s laws and the level of consciousness of Korea’s citizens. What kind of big money is there to be made from the meat dog industry that he would not hesitate to commit such an act?

People like this farmer who are involved in our nation’s dog meat industry are disregarding animal protection laws, expertly maneuvering around administrative agencies by taking advantage of legal loopholes, and even ignoring civil complaints by village residents.

The public sentiment of the majority of our citizens who tolerate dog meat consumption and the horrific and cruel raised cage breeding has created this ‘National Animal Abuser’ who has declared that he will perform vocal cord removal surgery on more than 600 dogs.

Our incompetent Ministry of Agriculture, Food and Rural Affairs has not only failed to control the dog meat consumption problem and the proliferation of illegal farms, they have actually been aiding and abetting them. Korea is stuck in the medieval era of darkness when it comes to the protection of animals, and local governments that have not taken any measures regarding these dog meat farms are responsible for bringing about this state of affairs.

When the reality is like this, it would be useless even if people gathered around the parks and hosted Companion Animal Festivals hundreds of times if the dog farm that forces vocal cord removal surgery on 600-1000 dogs and keep them captive in raised cages their entire lives just to eat their flesh is granted permit and allowed to expand.

We make the following requests of the City of Gimcheon and the Ministry of Agriculture, Food and Rural Affairs:

By violently and brutally repressing a dog’s natural form of communication for his own personal gain, this meat dog farmer is hurting those who love these animals, making a mockery of innocent local residents, and even endangering our national status. We ask please not turn this National Animal Abuser into an Officially Approved Animal Abuser.

The era of irresponsibility and inaction towards dog slaughter and dog meat consumption must come to an end and we ask the City and the Ministry to show us your willingness to address this very critical issue.

We make the following requests of the City of Gimcheon:

2. As well as performing a facility inspection on the existing dog meat farm, please ensure that the farmer is not allowed to breed dogs or any other livestock animals within the Livestock Breeding Restriction Area.

3. In addition to the existing dog farm, thoroughly inspect all dog farms in Gimcheon for environmental damage and animal cruelty and announce your findings publicly.

4. Thoroughly investigate this dog farmer for animal cruelty. If the vocal cord removal surgeries are carried out, further investigate whether a veterinarian performed the surgery and publicly release your findings. Allow the Korea Animal Rights Advocates (KARA) and the Busan Alliance for the Prevention of Cruelty to Animals (Busan KAPCA) to observe investigations of all existing dog farms.

Request to the City of Gimcheon (Link in Korean)

We make the following requests of the Ministry of Agriculture, Food and Rural Affairs:

2. Please block the development of new dog farms and expansion of existing dog farms even if it is before laws can be established that prohibit such farms by conducting a survey of dog farms scattered throughout the country and testing dogs for diseases. Please show us that our nation is willing to control the slaughter of dogs.

3. During visits to farms to inspect the slaughter of livestock animals, obtain data regarding nearby dog farms and close them down first.

Request to the Ministry of Agriculture, Food and Rural Affairs (Link in Korean)