Home / Blog / Gimje’s response to our petition on epeople

Gimje’s response to our petition on epeople

posted by KoreanDogs.org team on January 10,2019 in Action Alert, Campaign

Below is Gimje’s response to our petition: Gimje, South Korea, Shut down the illegal dog meat farms, slaughterhouses and markets.

Response from the Gimje’s Public Health and Hygiene Department:

With regard to potential violations of the Food Sanitation Act, during the training and inspection of premises and businesses, we will focus on investigating and verifying such violations and will prosecute those who violate any of the applicable laws for the sale of food.

However, the dog meat trade issue is fundamentally controversial, and therefore, cultural, ethical, and legal review and consensus within legislation and government policy is necessary.

Response from the Gimje’s Environment Department:

In accordance with Article 46 of the Waste Control Act, it is permissible to recycle food waste as animal feed by appropriate recycling facilities.

In accordance with Article 2 (Definition) of Livestock Products Sanitary Control Act, dogs are not included under the definition or interpretation of “livestock”, therefore they are not subjected to the article 2 of the same law which regulates the slaughter of livestock. In addition, we would like to state that we do not slaughter dogs at the slaughterhouses in Gimje. Together with the Slaughterhouse department in Jeollabuk-do Provincial Government, we will jointly inspect the slaughterhouses to prevent this from happening.

With specific regard to violations of Article 8 (Prohibition of animal abuse, etc.) section 1 clause 1, clause 4, the Animal Protection Act Article 46 (Penalty) Section 1 clause 1 (A person who has abused an animal in violation of Article 8 subsections (1) through (3)), such violation shall be punished by imprisonment with labor for up to two years or by a fine of up to 20 million won. We will do our best to prevent this from happening.

Gimje’s government is helping the dog meat industry by justifying the industry using inaccurate interpretations or neglect of the existing laws. There are 7 dog meat restaurants within the city of Gimje (there could be more) and countless so called “Health Food Shops” which commonly sell dog/cat products, claiming that the slaughterhouses in Gimje do not slaughter dogs and that any claim to the contrary would require evidence to be credible.

Regarding the claim that the feeding of food waste to the dogs is legal, citing Article 46 of Waste Control Act, we want to know whether or not the dog farmers in Gimje, both large and small, who actively do recycle food waste as feed for dogs, are actually registered to process food waste in this way, and whether or not they are complying with the relevant and applicable laws. Further we would like to know what actions (in terms of monitoring registrations, carrying out inspections and enforcement) the government is taking in relation to dog meat farmers engaged in this activity. What evidence can the government provide in relation to the above? We also note that we did not receive a response in relation to the violation we have pointed out and as referenced below: 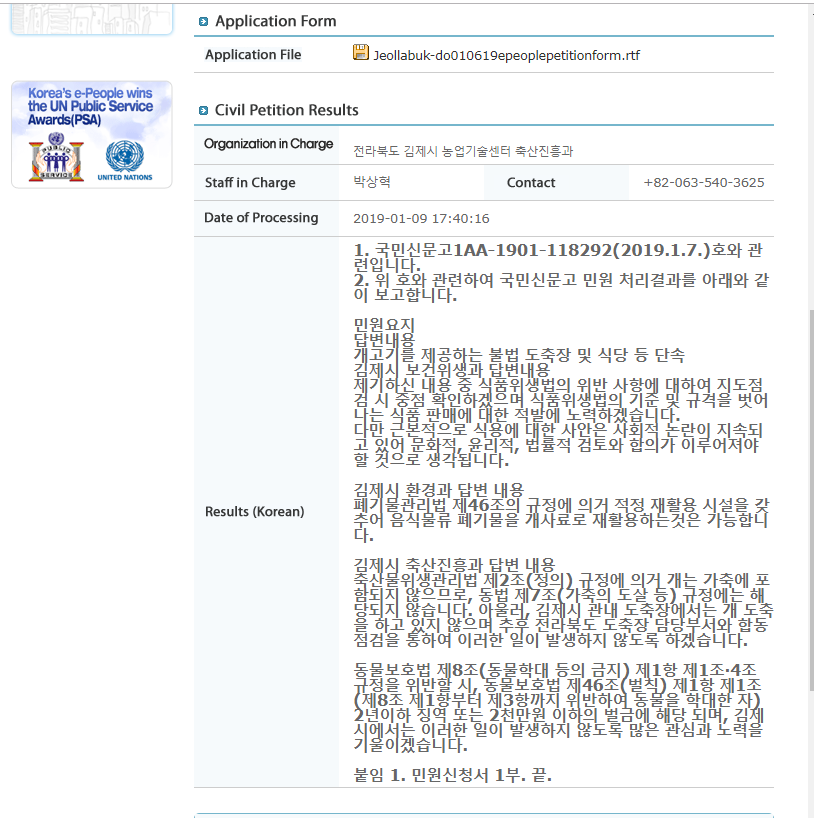