Gyeonggi-do Province’s response to our petition on epeople

Below is Gyeonggi-do Province’s response to our petition: Gyeonggi-do, South Korea, Shut down the illegal dog meat farms, slaughterhouses and markets.

Currently there are two proposed amendments to current legislation that are undergoing the review process by the National Assembly Committee in relation to this issue:

1. An amendment to the Animal Protection Act that will prohibit the killing of animals arbitrarily (Proposed by Mr. Pyo Chang-Won with 10 co-sponsors on June 10, 2018)

2. An amendment to the Livestock Industry Act that will exclude dogs from the definition of livestock animals (Proposed by Mr. Lee Sang-Don with 10 co-sponsors on May 10, 2018)

We feel that if these amendments pass, they will provide the grounds for the legal ban and we, Gyeonggi-do Province, will thoroughly implement the administrative measures accordingly.

They did not address our requests to enforce their existing laws against the dog and cat meat trade. They also failed to mention what they are doing to help government pass the proposed legislation (and relevent amendments) that will end the dog and cat meat trade? Gyeonggi-do has the largest dog meat industry of all the provinces in South Korea, but it seems that they are doing nothing to bring this illegal trade to an end. Their profound indifference toward the unimaginable suffering of dogs and cats is truly shameful.

What is the Gyeonggi-do provincial government doing to enforce the existing laws against dog and cat meat trade, read more here: https://www.ekara.org/activity/against/read/7537 Please review and respond with details and evidence to back up your claims. Also what is Gyeonggi doing (in terms of direct actions) to help pass the two proposed legislation changes by Mr. Pyo and Mr. Lee that have been referenced? If you are doing nothing, than you are supporting the dog and cat meat industry by neglecting your duty and helping to line the pockets of criminals, while millions of dog and cats are being tortured and slaughtered in most inhumane ways. Your response will be appreciated. 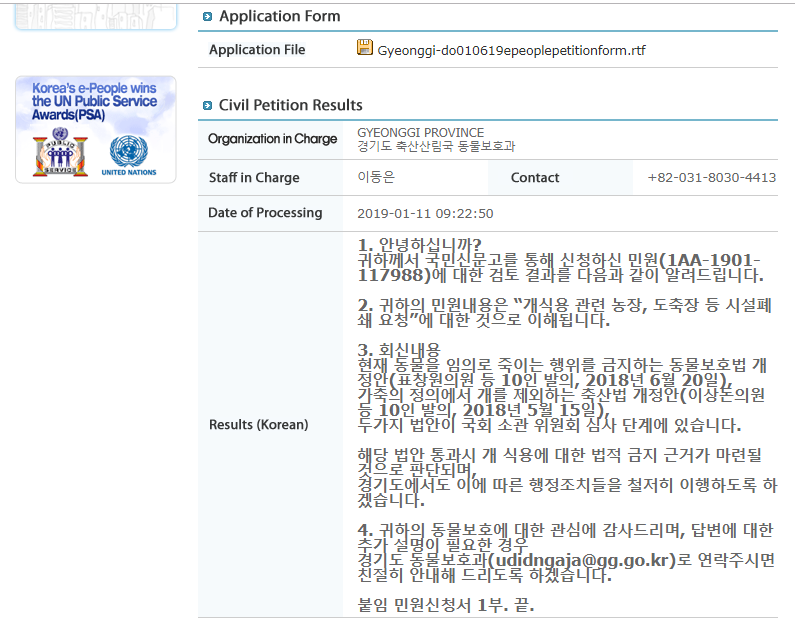