Home / Blog / Haenam’s response to our petition on epeople

Haenam’s response to our petition on epeople 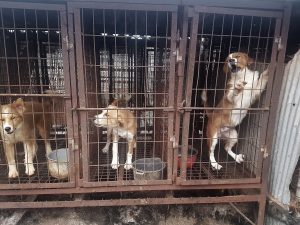 Below is Haenam’s response to our petition: Haenam, South Korea, Shut down the illegal dog meat farms, slaughterhouses and markets.

I would like to thank you for your interest and participation in our county’s affairs.

Dogs are currently classified as “livestock” under the Livestock Industry Act and therefore, it is legally permissible to breed them. But in the Livestock Products Sanitary Control Act, dogs are not classified as a livestock animal intended for human consumption, such as cattle, chickens, etc.

There are some dog farms that breed and raise dogs in our county. However, recently, there has been a change in people’s consciousness along with the decrease in consumption of dog meat soup so currently, dog farmers have either closed down their farms or will close down in the near future.

In the traditional open air markets in our county, there were stores selling dog meat as recently as six years ago, but now, due to the change in consumption culture, there hasn’t been much demand for dog meat, they have either changed their businesses or closed down their shops. We will do our best to protect and manage abandoned animals in the future.

We sincerely thank you for your interest and participation in our county. 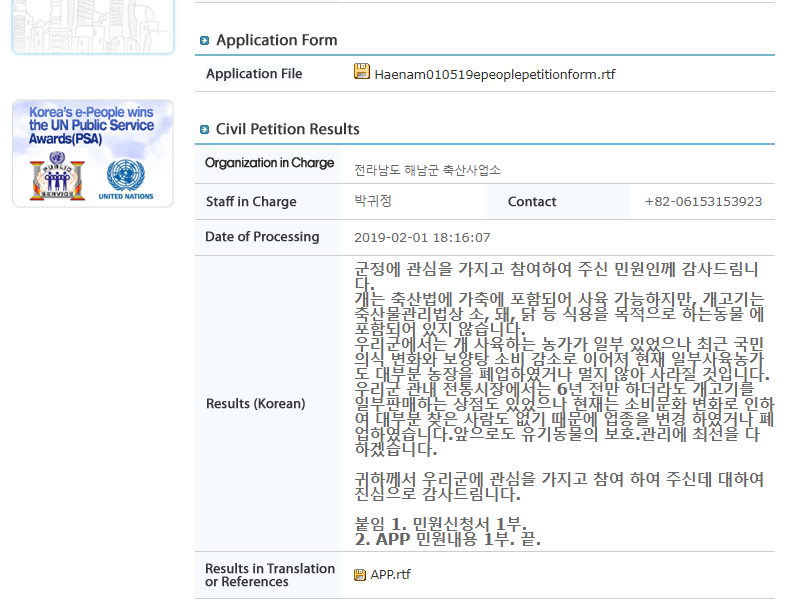 it fails to substantiate and evidence what direct actions the Haenam County is taking to enforce existing laws to disrupt the entrenched dog meat trade in South Korea. We have not been provided, in this response, with any evidence of any direct actions taken by the Haenam County, such as recorded information relating to inspections, monitoring and actual enforcement action taken against violators, in relation to dog meat farming, slaughterhouses and businesses selling dog meat and dog meat products (such as dog elixir and dog soju);

it fails to show what actions the Haenam County is taking with regard to proposing amendments to existing legislation or bringing in new legislation to address and end the dog and cat meat trade, and