Home / Blog / Haman’s response to our petition on epeople

Haman’s response to our petition on epeople

posted by KoreanDogs.org team on January 12,2019 in Action Alert, Campaign

Below is Haman’s response to our petition: Haman, South Korea, Shut down the illegal dog meat farms, slaughterhouses and markets.

Their English translation is rather poor, but essentially they deny that there are any violations of laws in their dog and cat meat industry as well as denying that there are any dog farms, dog meat shops, and places that supply food waste that is then feed to the dogs for consumption in their county. They also claim that they are enforcing the legislative Act on the Management and Use of Livestock Excreta when violations occur.

The two search results on Naver (the most popular search engine in Korea) – the first one was for so-called “Health Food Shops” which commonly sell dog elixirs and cat elixirs (also known as dog soju and cat soju); and the second one was for “dog meat restaurants” resulted in: 149 Health Food Shops; and 32 dog meat restaurants in and around Haman.

The fact is that the city of Haman cannot provide evidence that these illegal dog farms, slaughterhouses, dog meat shops do not exist in their county, because they do not regulate this industry. Their response is not only inaccurate, but profoundly indifferent towards the countless animals that are abused in the dog and cat meat industry openly operating in their county.

Below is a new petition to Haman County we will file with the epeople:

The County of Haman did not address all of our concerns regarding the potential (and likely) violations of legislation that we listed in our petition. We would like to ask county of Haman to provide the following:

1. Evidence to support their claim that there are no dog farms, slaughterhouses and meat shops that sell dog meat products (as we found hard evidence to the contrary).

2. A complete list of all the dog farms operating in their jurisdiction and supporting evidence that shows that all of the dog farms that are operating are fully registered as operating as such a facility, as well as the records of their inspection as required by local laws.

3. Evidence that the dog farms have been inspected for the waste treatment facility and the results of those inspections.
We look forward to your response. 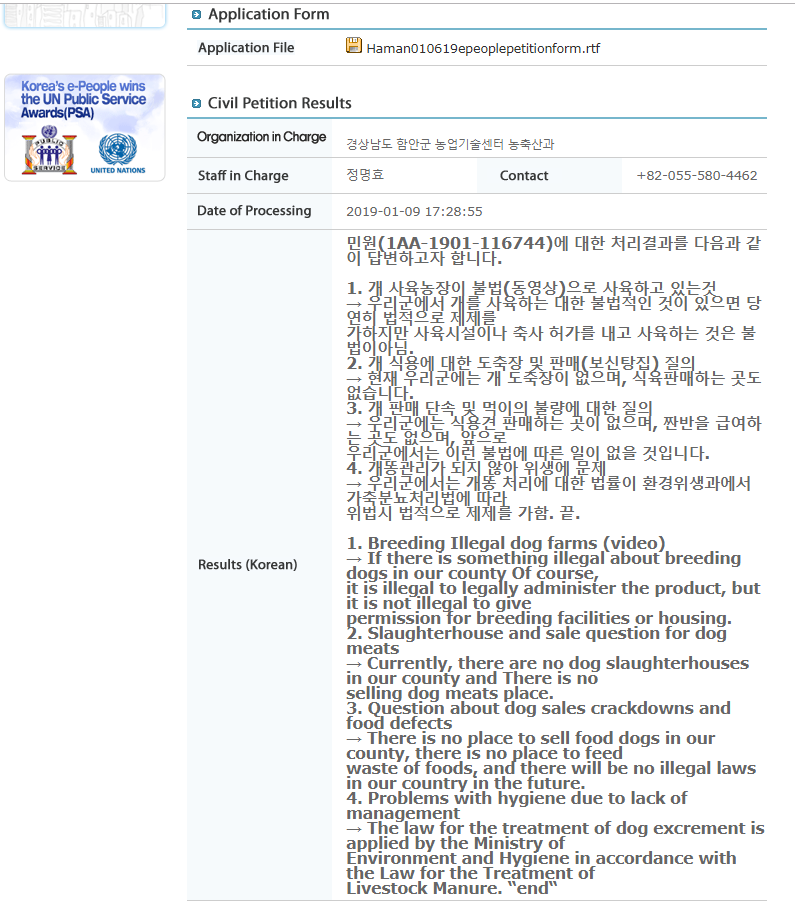