posted by KoreanDogs.org team on January 5,2016 in Uncategorized

Sharing for Nami Kim and her team.

I have great news to share with you! I received an official reply from the government by registered mail today regarding the illegal dog farming and slaughtering on city owned land in Incheon. As you may remember the Munhak dog farm 4 occupies land owned by the city of Incheon without permission. The illegal dog farm currently has 200 dogs, doing illegal slaughtering, and supplying dog meat to nearby dog meat restaurants. I filed this case directly with several government offices wanting legal action brought against the owner of the dog farm. Korea Forest Service’s Forest and Environmental Protection Department has replied and it sounds very positive (sorry but the reply is written in Korean). The case is now with the City of Incheon.

In the meantime we will continue our work by visiting the Munhak dog farm 2 and 3 today. I hope the city officials in the district assist us just like Mr. Lee did so the two butchers will be made to surrender all the dogs to us today. No. 2 butcher has a son who is a policeman in power. I fear that because of the son’s influence this will be a tough fight. 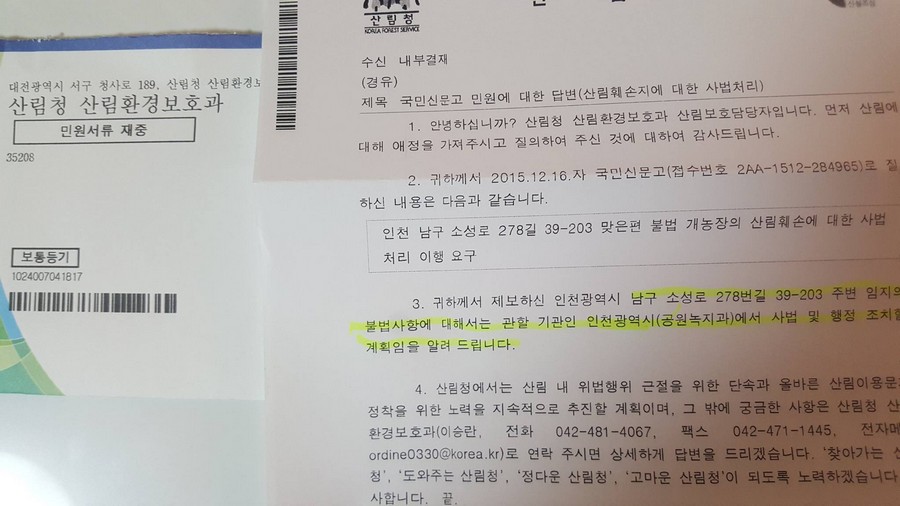 Click HERE for the video of this dog farm.

Sharing for Nami Kim and her team.

We were at the Munhak-dong dog farm 2 & 3 sites today but I am sorry to report we were not successful in our rescue attempts. The district officials from three departments were not very helpful. There are about 20 dogs at this site ready to be slaughtered for their meat at any time. The district officials are not willing to help or do anything to stop the slaughter saying, “nothing we can do.” We were simply unable to take action to shut the Munhak-dong dog farms down today but we were able to ensure the butcher paid the fine according to the violation of sewage system and environment contamination. So far, applying the Animal Protection Act has never been useful as it says dogs are classified under “livestock.” This is going to be a long term fight.

Click HERE for the video of this dog farm.