Home / Blog / “Koreans! Don’t eat dog meat!” … Protests from all around the world

“Koreans! Don’t eat dog meat!” … Protests from all around the world

posted by KoreanDogs.org team on August 9,2012 in Campaign, Event 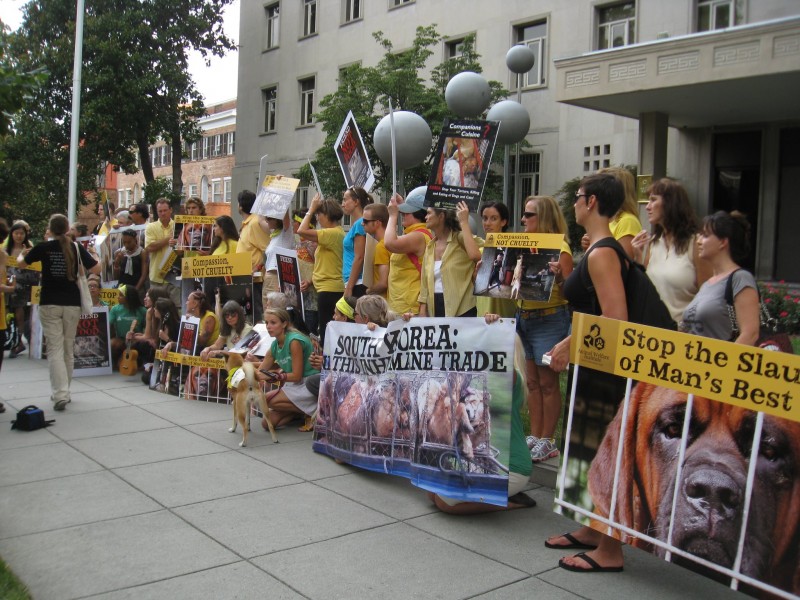 Yesterday (August 7) was Malbok. This is a day the sale of boshintang(dog meat soup) surge. On this day, protests against S. Korea’s dog meat consumption were held all around the world.
Sang-Bok Lee correspondent reports from Washington DC.

In S. Korean time this morning, Dupont Circle in the center of Washington DC.

Around 70 people from world animal protection organizations such as ‘Animal Welfare Institute’ and ‘In Defense of Animals’ has gathered.
They were carrying pickets ‘Dogs and cats are friends, not food’, ‘S. Korea, Stop the cruel act of slaughter’ written on them.

They marched through the street chanting “S. Korea! Stop the cruelty to dogs and cats, companion animals, immediately.”

They handed out leaflets and also protested in front of the S. Korean Embassy.
Rosalyn Morrison/’Animal Welfare Institute’ member: In S. Korea, 2 million dogs and cats are being slaughtered every year.

A dog named “Lucy Lu” who was rescued from being sold to the dog meat market in S. Korea was also present.
This dog who is currently living in Washington DC is known as the symbol of opposition to the S. Korea’s dog meat practice.

This anti-dog meat trade protest was held simultaneously around the world including Australia, Thailand as well as Washington DC.

American mainstream media such as ABC News and the Washington Post reported on the S. Korea’s dog meat practice and debate with heavy coverage.

Dog meat controversies that started from the 1988 Seoul Olympics is increasingly heating up.