Home / Blog / Another trite response from a Korean Ambassador

Another trite response from a Korean Ambassador

posted by KoreanDogs.org team on June 21,2016 in Campaign

Letter from the Korean Embassy in Ireland

In response to our ongoing letter writing campaign to Korean Embassies around the world, our supporter received a response from Ambassador Kang-Il Hu, of the Korean Embassy in Ireland. 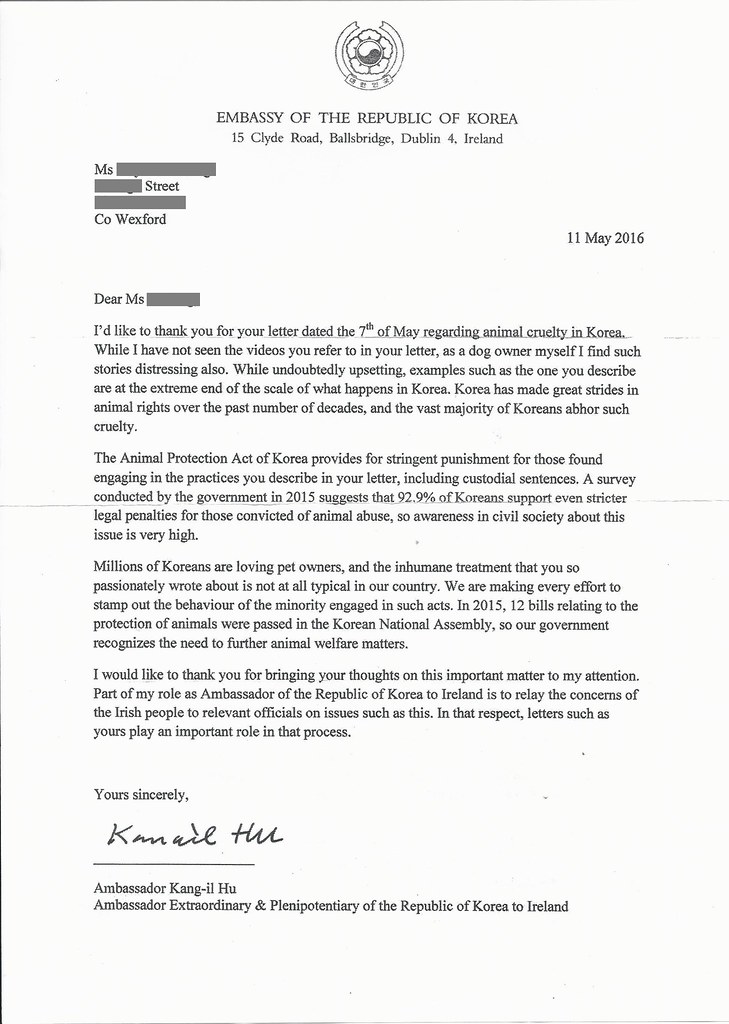 In the typical fashion that we have come to expect, the Ambassador appeared to be unaware that such barbaric behavior still freely exists in his country, and assured us that his Government does concern itself about the maltreatment of innocent creatures. After reading his response, we infer that he was too distressed by this animal cruelty to be able to watch the video links provided. Little does he realize how distressed he really would have been had he actually watched that horrifying documentation of cruelty.

In addition, the Ambassador commented that millions of Koreans are loving, pet owners, and that awareness in civil society on this issue is very high; he noted that a survey suggests that around 93% of citizens support even stricter legal penalties for those convicted of animal abuse. But, if this is so, why haven’t we seen these caring citizens in our ongoing battle to stop the barbarity? Why is Nami Kim one of the only very few people in Korea waging war against these dog-farmers?

We are again responding to Ambassador Hu, and all Korean Ambassadors around the world, to remind them that their Laws are neither policed, nor enforced, regardless of what they claim about their country’s progress; and we will assure them that, as long as the dog meat industry is allowed to operate, they will continue to be the target of the world’s condemnation and criticism.

Email address of Embassy of the Republic of Korea in Ireland: [email protected]

Click HERE for the email addresses of Korean Embassies and Consulate General’s Offices!

Thank you for your response to our letter. It is encouraging to read your words about the great strides Korea has made in advancing animal rights. Given the ease with which animal rights advocates can gain visibility and accessibility into industry via social media, it is logical to presume you and your government would stand strong against abhorrent, illegal behavior, even if, as you suggest, it is only on the fringe of a civilized society.

This brings us to the reason for our follow-up letter. We request further clarification on the 12 animal welfare bills passed in the Korean National Assembly in 2015. A check of the Assembly’s online site does little to explain how impactive these bills are, the thoroughness of their administration, or the punitive repercussions of dishonoring them. A detailed research document was published by KARA, Korean Animal Rights Advocates, that concisely explains the need for protections to be passed, upheld, and enforced, and we would like to have a better understanding of how their recommendations have been considered as these bills were put into place by the Assembly.

The video links included in our letter (https://youtu.be/cCdTceduKcY) allow you to see for yourself that the dog and cat meat trade is quite active and even thriving in various parts of the country that are, presumably, governed by the animal protection bills you assured us prohibit this industry. Forgive us, but we are having a hard time reconciling the protections put in place for voiceless creatures to the barbaric and positively medieval behavior exhibited by inhumane executioners, who, by all accounts, appear to be exempt from the country’s governing laws. These dog and cat meat markets are not operating in the shadows or behind closed doors. The world sees it. Film footage is easily gotten, from numerous farms that mass produce their victims in raised cages to cities that host the markets. The world hears it. The cries and screams from these innocent animals being tortured for human consumption and pleasure can be heard far beyond the confines of their prisons.

We trust you find the maltreatment of any living being as unacceptable as other civilized individuals, most especially as an admitted caring dog owner. It is that trust we place in you as a human being and as a government official that encourages us to believe you will do the honorable thing and take an affirmative stand against a horrifying existence for the voiceless of society. Please honor our trust and prove Korea is above those who would sully its reputation as a country of progressiveness and compassion. Please administer the 12 animal welfare bills the Assembly spent time crafting, debating, and passing, and alert those who would laugh in the face of those protections that the time has come for swift and punitive action. Make proud the 93% of citizens who advocate for stricter legal penalties for those convicted of animal abuse. Shine a positive light on Korea. Thank you.

[Your Name and Country]