posted by KoreanDogs.org team on August 29,2013 in News

A man lures and kills neighbor’s 8 year old pet dog to eat in Cheongsong, Gyeongsangbukdo-province. Korean Animal Welfare Association(KAWA) became involved with this case when the victim’s family called us last Thursday and the below is a summary written by the family about the case.

“Our dog, Gilyongee, was 8 years old. My father raised him freely in the country. Our Gilyongee only approaches family and close acquaintances and never approaches strangers. Even when he goes out, he takes a walk around the neighborhood once and comes right back home. When Gilyongee did not return home for several days, my father went on searching for him and heard from a man at a neighborhood gas station that “he was tied up next door”. So my father went next door and asked the owner of that house about Gilyongee but the man said he “tied him up but he escaped”. My father believed his story but while talking to his friends, he heard his friend saying, “That man is crazy about dog meat and he is very well known for catching and eating whatever dog he sees.” My father became suspicious and went to that man’s house at night with a flashlight and he found traces of blood and dog excrement assumed to be Gilyongee’s at his outdoor water faucet area. My father was scared and horrified and called the police. The police came out and questioned the man, “where is the dog?” and the man lied and said “the dog got away”. When the police keep interrogating him and asked him about the blood and the excrement at the water faucet area, the man became flustered and did not respond. There is a refrigerator big enough to fit a person next to his water faucet area and when the police opened it, there was the body of Gilyongee with his white fur inside a red basin. That’s when the man finally confessed and said, “I was going to eat him”. Can you believe this? How terrified Gilyongee must have been even shitting himself… How much would he have struggled to set free… Gilyongee was like my little brother and my love. We cannot forgive this man for what he did to our dog. Please help us. In order to do our best for our dog, we cannot forgive this man. We will fight to the end so that this doesn’t happen to other dogs.”

Gilyongee’s family wants to punish the neighbor who killed their dog but they are afraid that the police might try to convince them into “settling the case out of court in order to avoid confrontation among neighbors in a small village” or it gets handled as a minor ‘property’ damage case. That’s how they came to request our help.

With our guidance, Gilyongee’s family reported the perpetrator to the authority for animal cruelty, and requested the seizure of Gilyongee’s body that is still being kept in the perpetrator’s refrigerator. KAWA will continue to follow up with the police’s investigation of this case and will make sure the perpetrator is prosecuted for the violation of animal protection law. Companion animals are not merely property. They are lives that needs to be respected and they are part of family. KAWA will do our best to make sure this case is tried as an animal cruelty case and not as a destruction of property case. 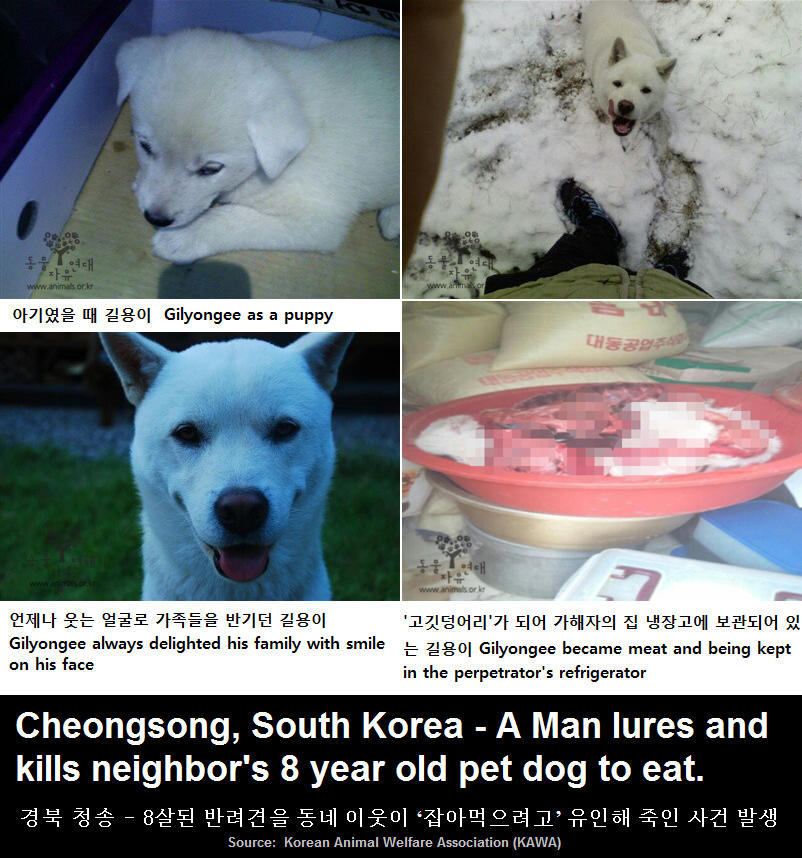