posted by KoreanDogs.org team on September 25,2012 in Uncategorized 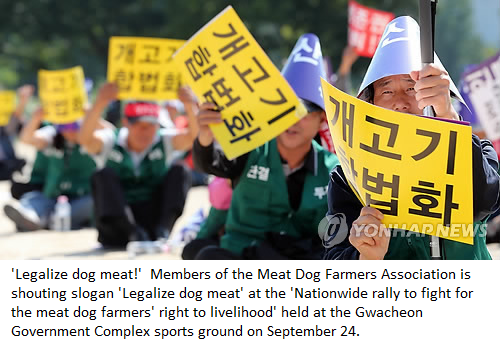 As meat dog farmers hold a rally demanding legalization of dog breeding and government support, the controversy over the dog meat is expected once again.

About 500 meat dog farmers held a rally at the Gwacheon Government Complex sports ground on September 24, 10am and demanded that meat dog breeding be included in the livestock farming and for the government to support the dog farms.

The association recited a resolution with this content, shaved the heads of about 4-8 officers and conducted a performance symbolizing the obliteration of meat dog farms to express their complaint to the government. 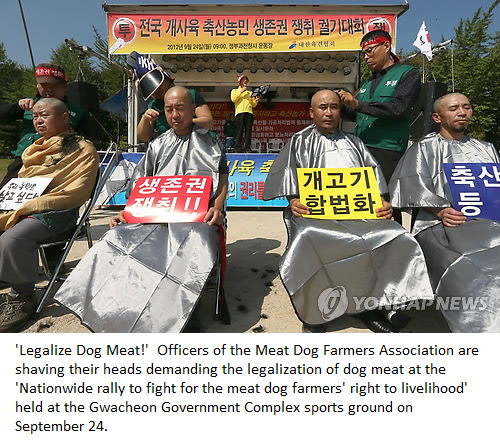 For this reason, breeding farmers has been criticizing and complaining that the government is not consistent in their support of livestock farmers.

Association Secretary-General, Youngin Choi stated, “If our difference with the government cannot be mediated today, we will return our dogs to the government and continue our demonstration for the next 3 days sleeping in the government complex sports ground.

Ministry of Food, Agriculture, Forestry and Fisheries responded, “It is difficult to accept the demand of the meat dog farmers because public opinion about the dog meat is at a fierce standoff”.

Animal protection organizations have been claiming that “There are controversies around the animal cruelty during the slaughter process and the dog meat consumption which is a threat to the public health and the breeding of dogs for this purpose must be stopped”.

Click here to see more photos from this event.