posted by KoreanDogs.org team on November 14,2014 in Campaign, Event, News

Written and shared by Bob Heisler.

I bought the "Monsters in the Closet" cd on Amazon and a Mayday Parade t-shirt on eBay. I am in the process of buying guitar picks with the band's logo on one side and the KD logo on the other. These picks will be given out free to the fans. www.maydayparade.com 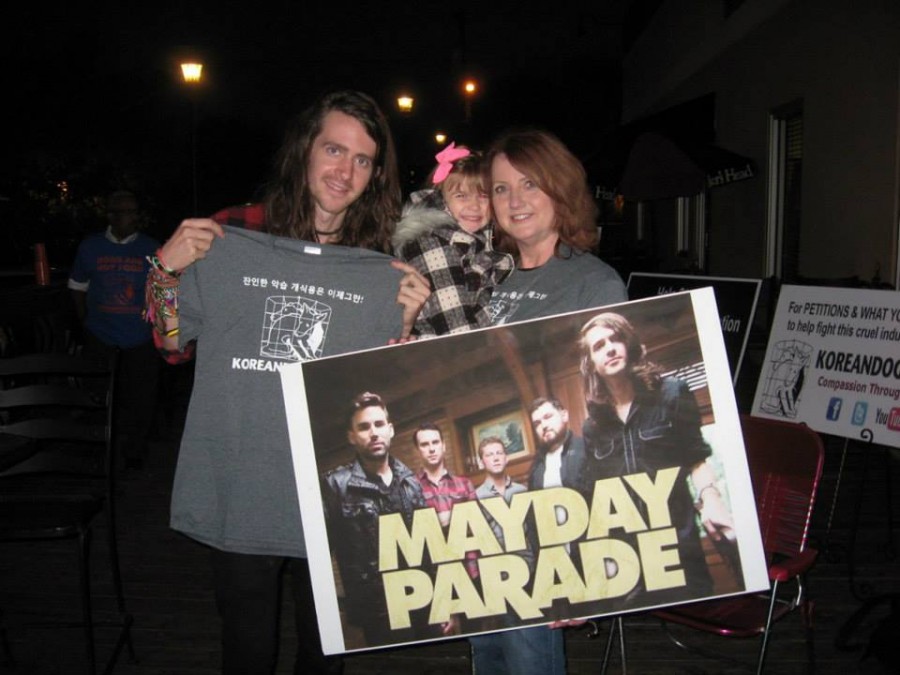 Derek Sanders, the very talented lead singer and pianist of the world famous band MAYDAY PARADE, with his daughter and mother at The Side Bar Theatre in Tallahassee, Florida just before their performance there.

Video from the event: Warning: Graphic and disturbing images.

Video from the event: With title song, Ghost by Mayday Parade. Not Graphic. 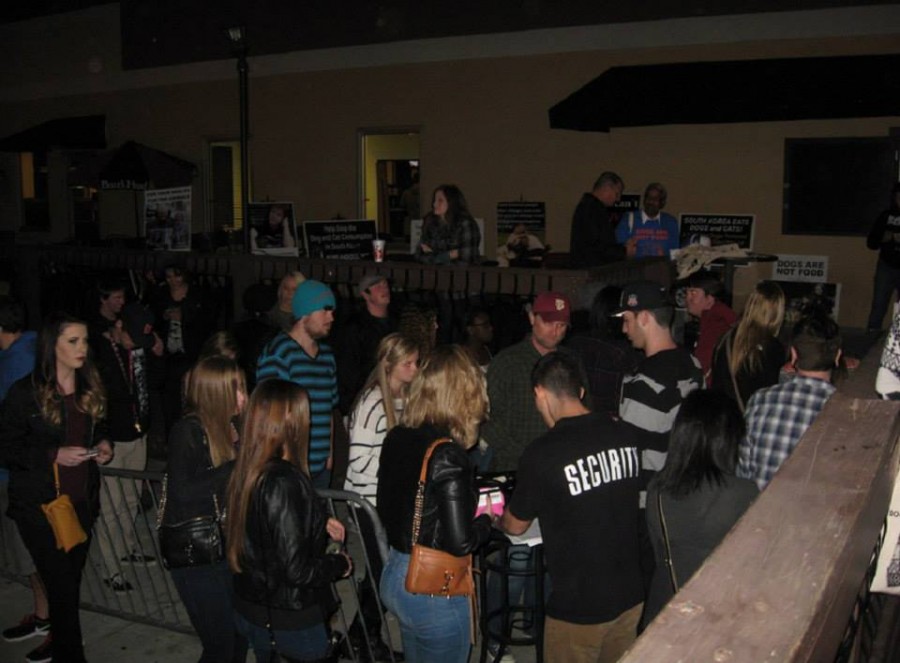 The young concert goers were lined up around the block to get in The Side Bar Theatre to see Mayday Parade perform. We set up a table and signs on the deck in the background and gave away promotional KoreanDogs items. 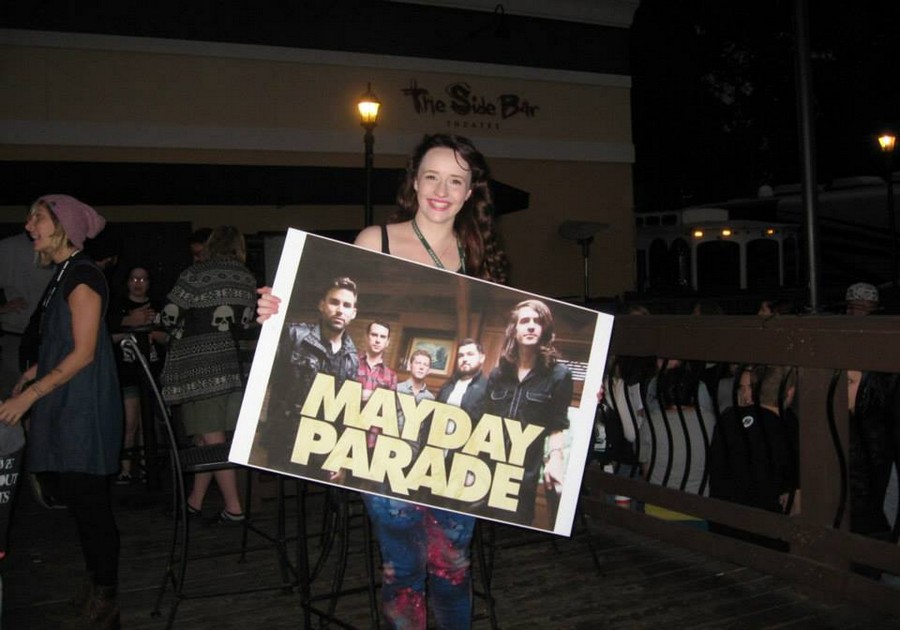 Super fan Maci helped me bring in items to set up for the give-away of KoreanDogs.org promotional t-shirts, hats, tote bags, key tabs, and plastic drinking cups. She cares deeply about the well being of animals. Maci is super cool. 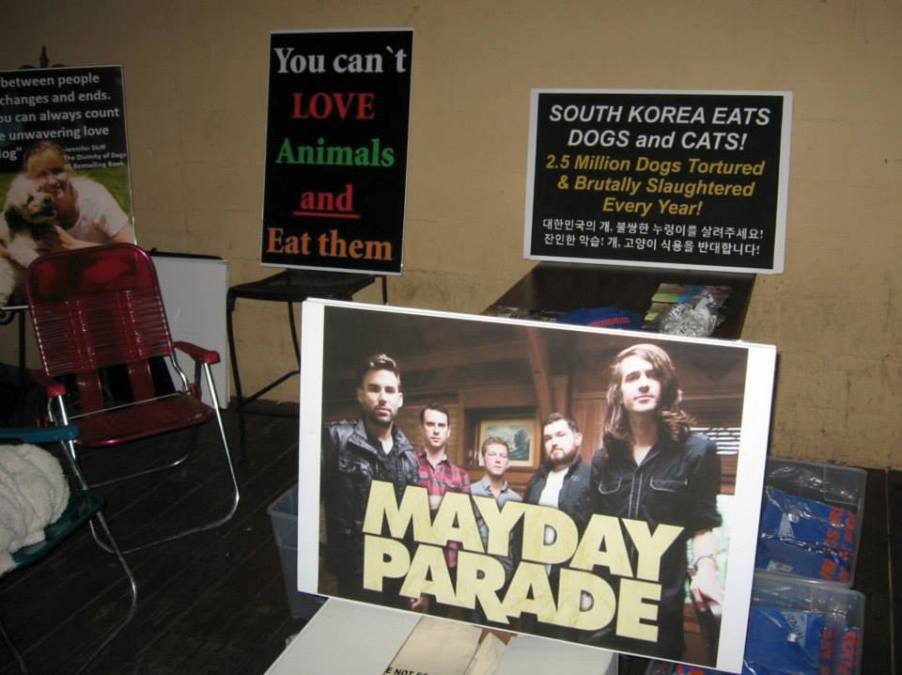 The Side Bar Theatre kindly provided us with a table and granted us plenty of space on the deck to set up our signs. 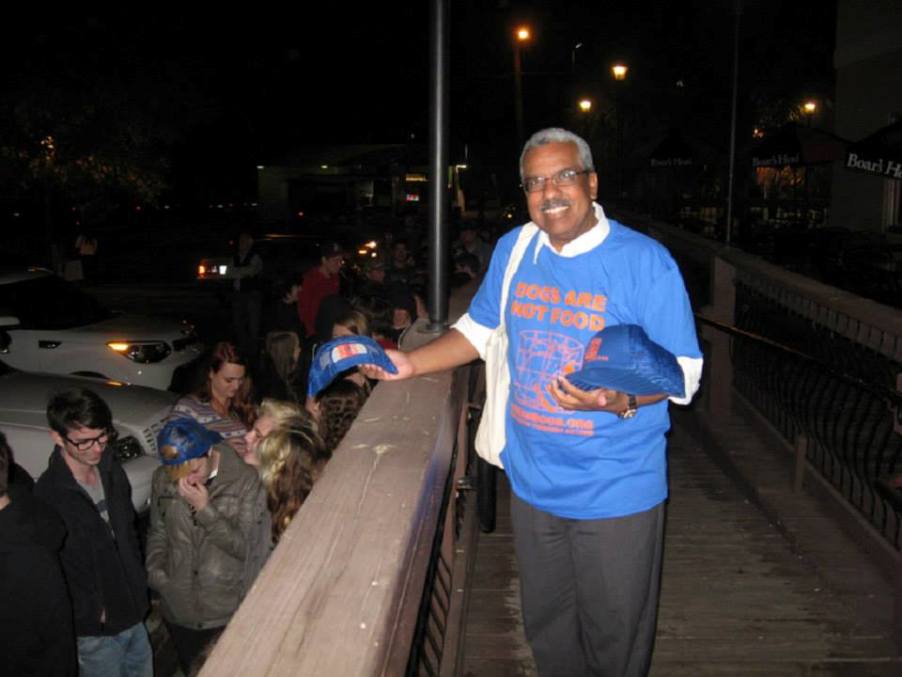 Colin was very good at giving away hats to the concert goers as they slowly filed into the venue. Thanks, Colin. You are the best! 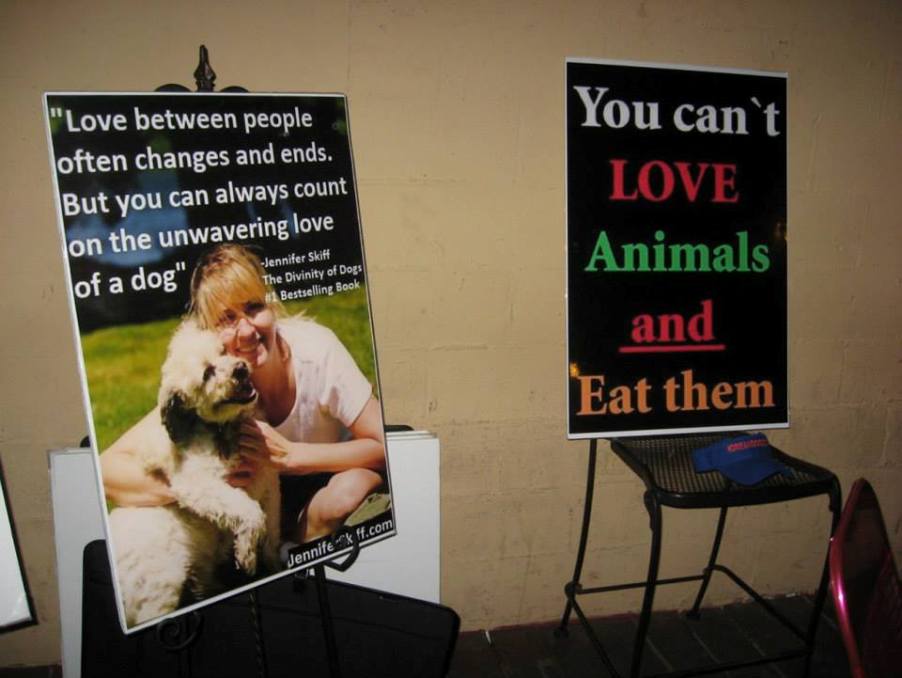 We had about ten signs promoting KoreanDogs.org, veganism/vegetarianism, and Jennifer Skiff's best selling book THE DIVINITY OF DOGS. I gave each band member a copy of the book as well as KD hats, t-shirts, tote bags, key tabs, and plastic drinking cups. 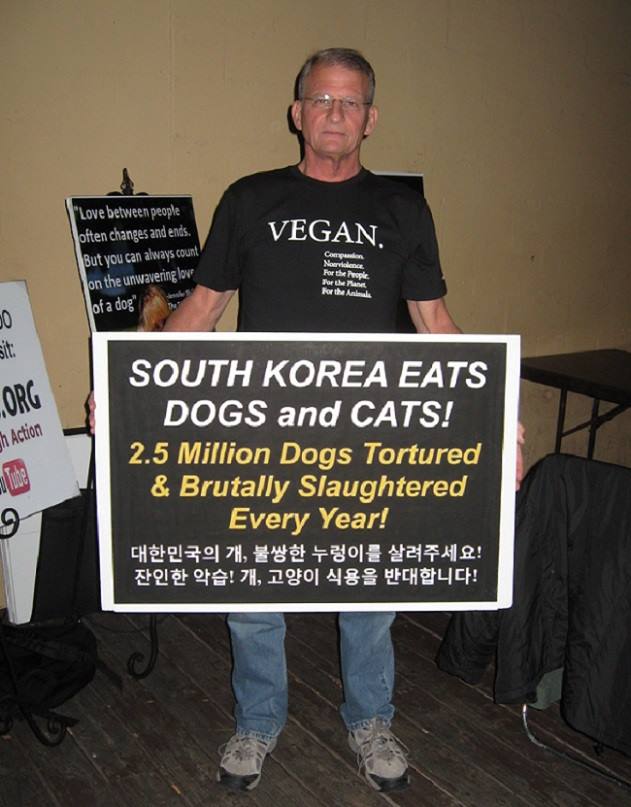 Mark is a compassionate vegan who helped us tremendously at the event. Thanks, Mark. 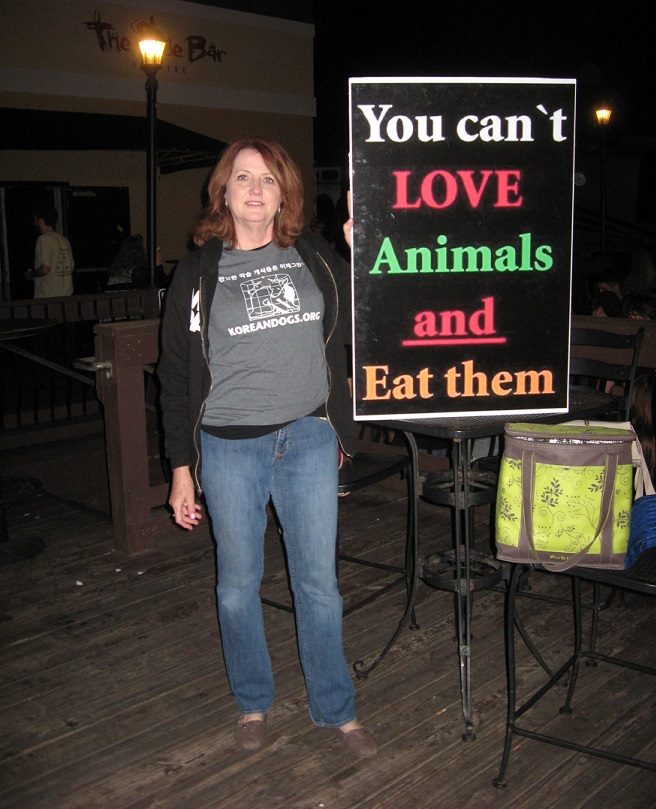 Lead singer Derek's mother Sally made the whole KoreanDogs.org event possible. Thanks very much, Sally. The dogs (and cats) love you. 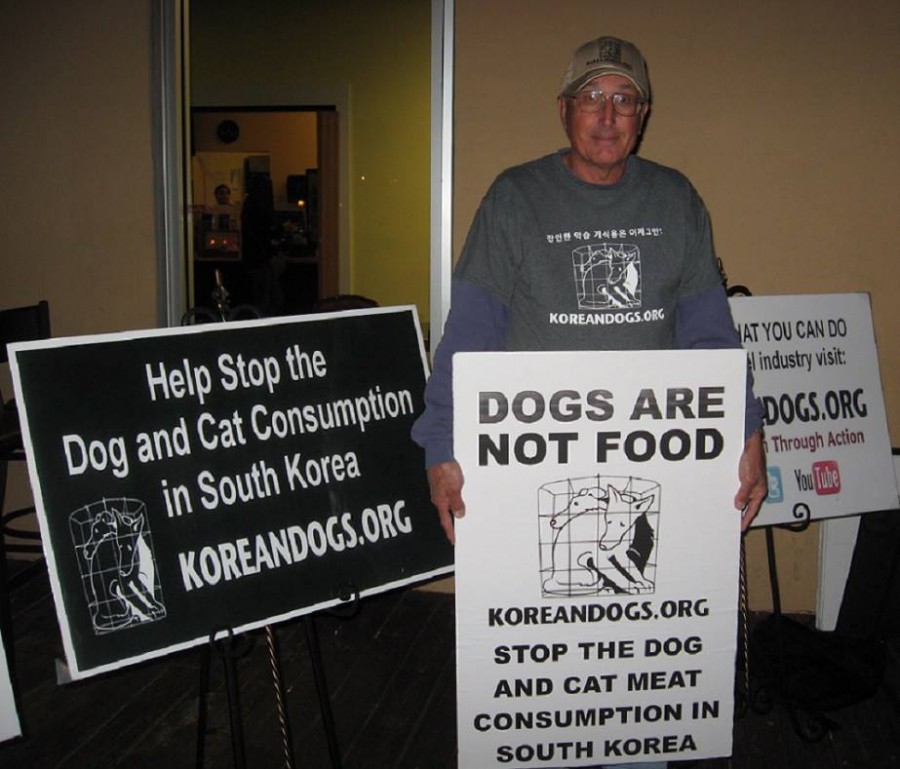 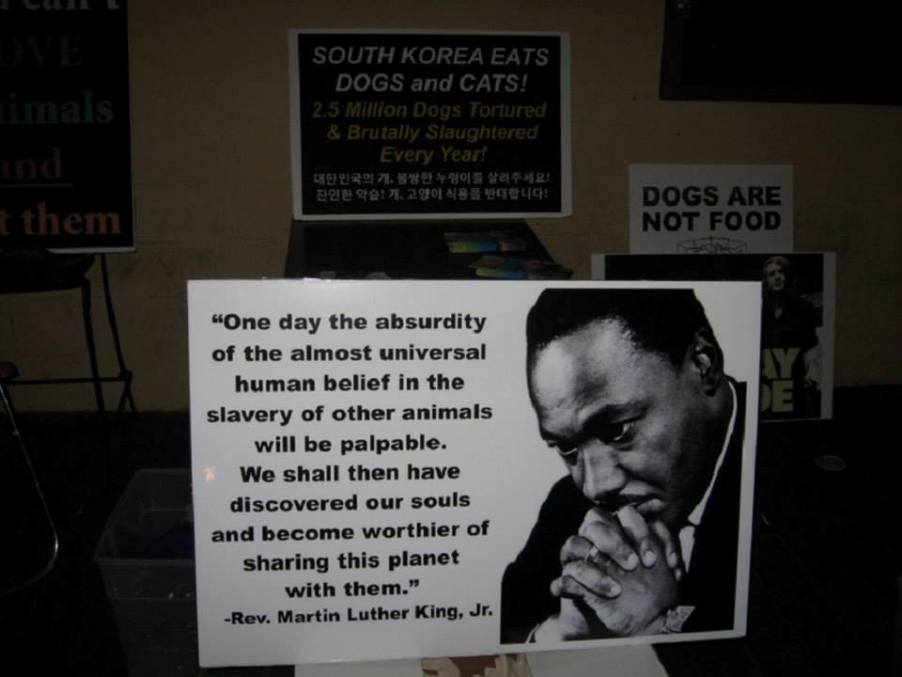 I am certain that the Rev. Martin Luther King, Jr. would be strongly opposed to the torture and consumption of dogs and cats. His wife Coretta Scott King and their son Dexter became vegans. 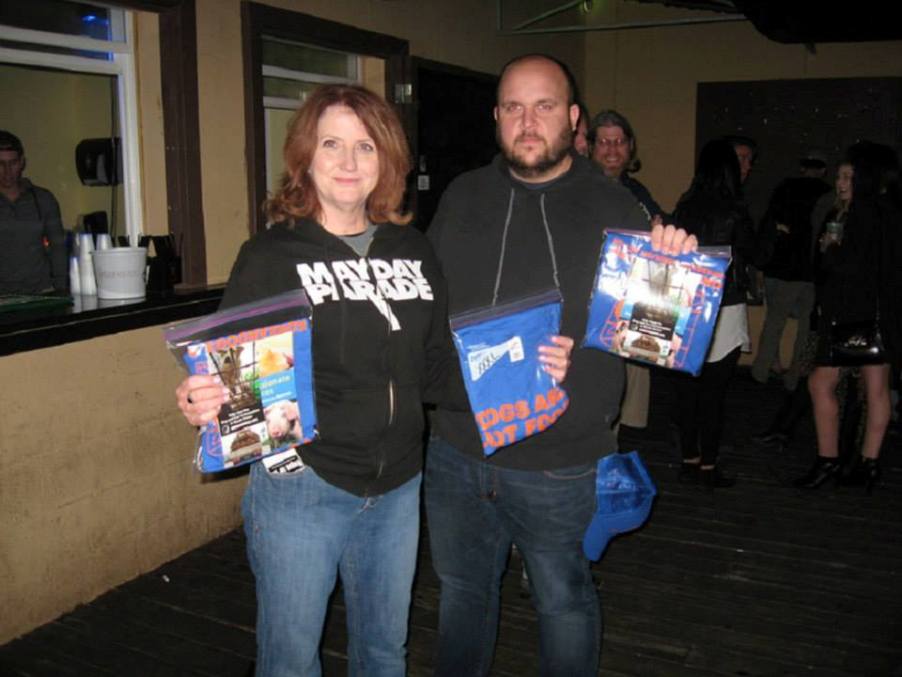 Sally gave away almost a hundred KoreanDogs t-shirts despite the fact that they are the school colors of the University of Florida. We were deep inside Florida State Seminole territory. The shirts were left over from our disastrous attempt to give them away at the UF versus LSU football game. Seminoles rule…..Gators drool! 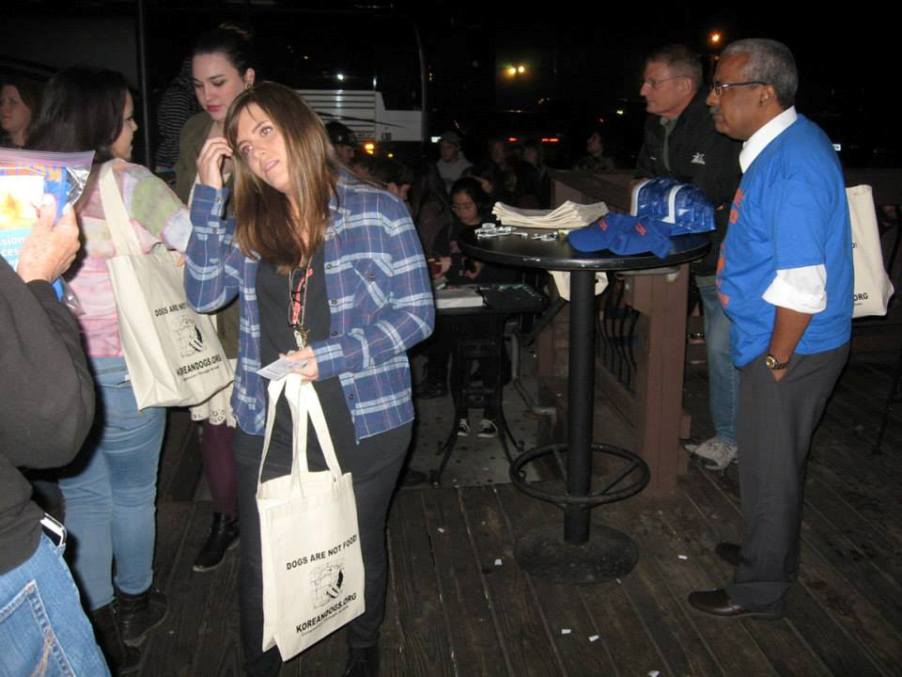 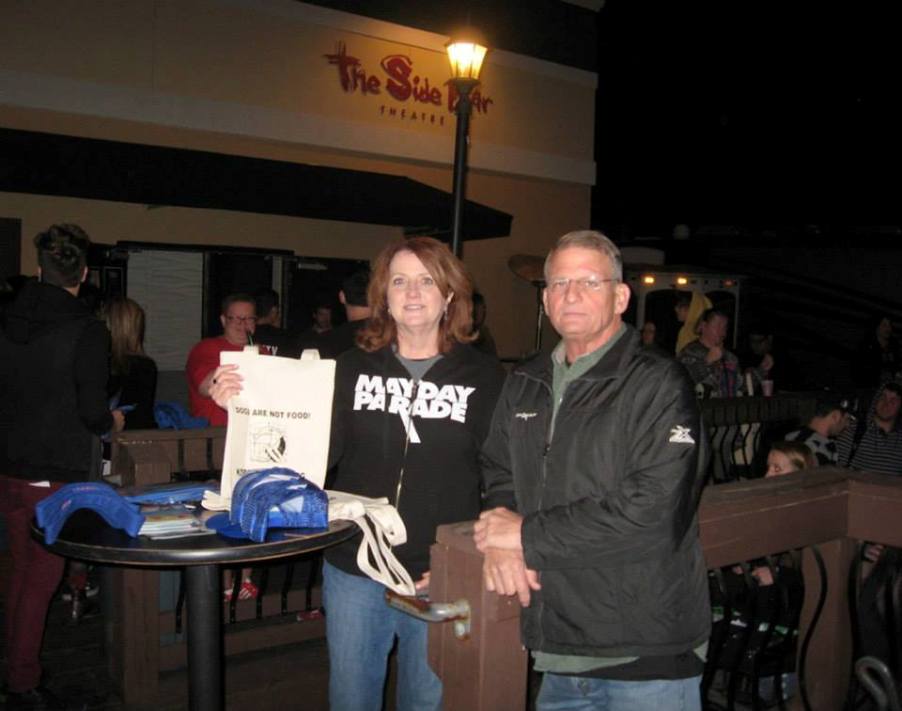 Sally and Mark at the entrance to the theatre. Washable tote bags are much better to use than plastic grocery bags which are a threat to wildlife and the environment. 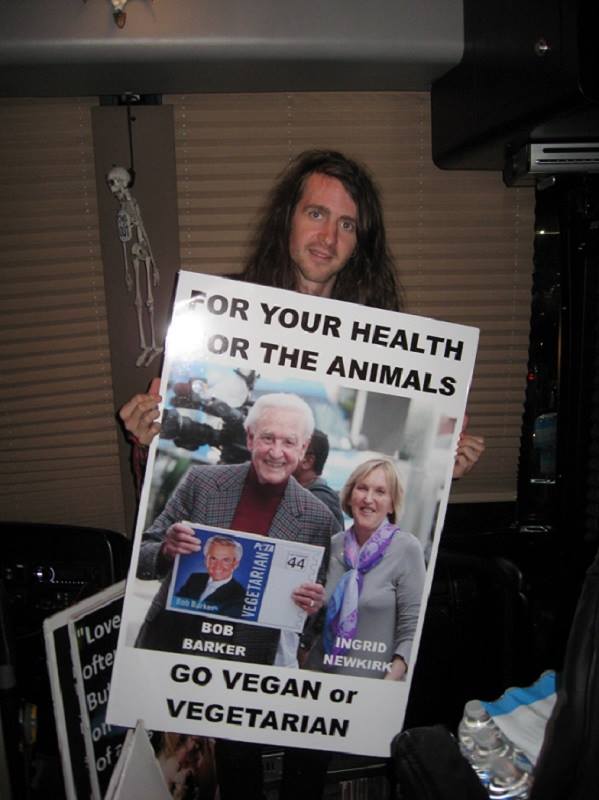 Derek is a long time vegetarian. That's a good choice for your health, for the environment, and definitely for the animals. 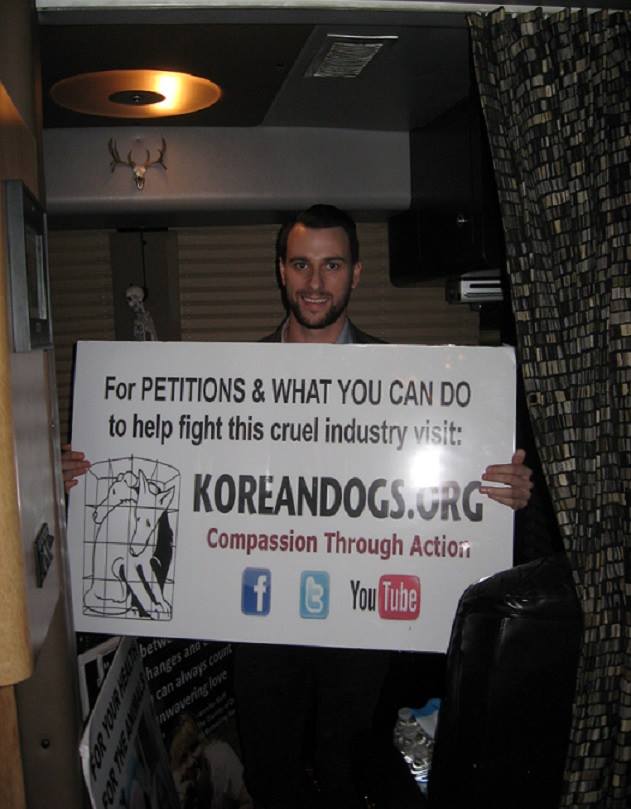 Here is guitar hero Alex holding a KoreanDogs.org sign on the tour bus. All the band members are super cool and they are all excellent musicians. Thank you all for your support and hospitality. 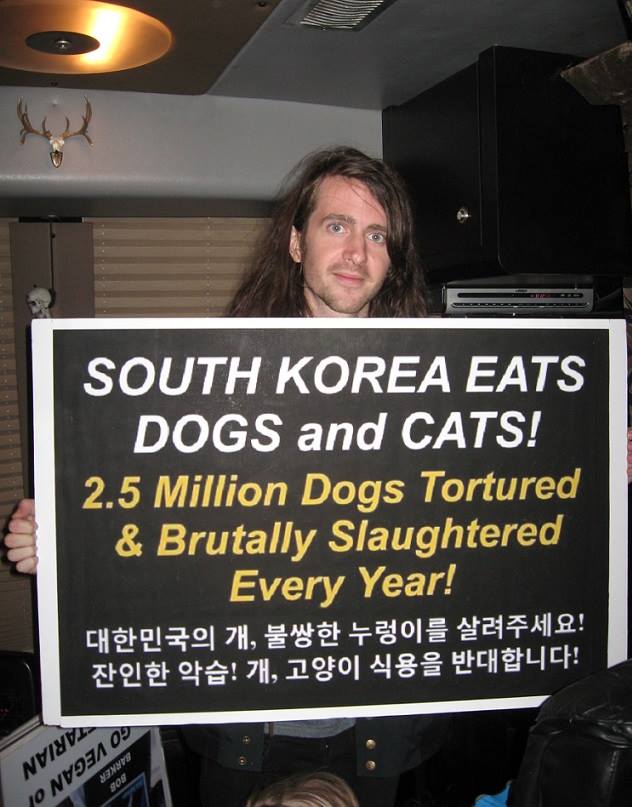 The fans all love Derek and now the Korean Dogs do, too. Thanks for letting us hang out with the band on the tour bus, Derek. You are the best. 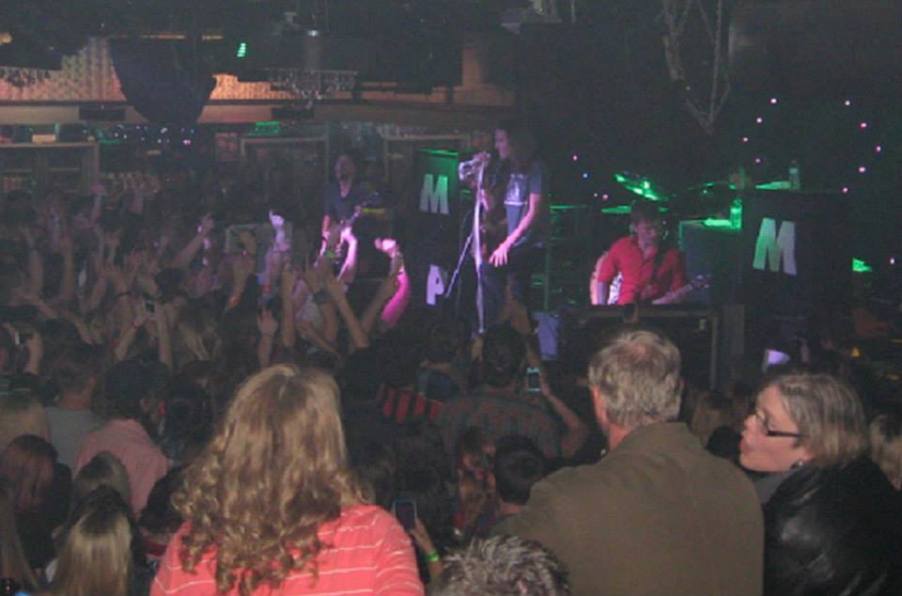 Lead singer Derek and drummer Jake actually wore KoreanDogs t-shirts on stage. I am an old rocker, but I really like Mayday Parade's music. Their songs are meaningful and powerful. There is no rough language which sets a good example for the young people. I am now a big fan.

Thank you MAYDAY PARADE, Bob, Sally, Colin and Mark for giving a voice to the dogs in the horrendous South Korean Dog Meat Industry!