posted by KoreanDogs.org team on May 23,2012 in Campaign

Send a message to the Olympic Committee that we will boycott PyeongChang 2018 Winter Olympics until S. Korea ends the shameful and cruel practice of eating dogs and cats :  https://secure.registration.olympic.org/en/faq/ask-question

To the International Olympic Committee: I am extremely upset about the torture and consumption of companion animals in S. Korea. Even though S. Korea has established an Animal Protection Law for companion animals, dogs are still beaten, hung, electrocuted, and treated brutally by farmers and slaughters. Also, dogs and cats are still being beaten and boiled alive for so-called elixirs, which do not have medical properties except in the minds of ignorant and gullible customers. Until S. Korea ends this atrocity, S. Korea’s reputation in the international community will continue to suffer. Its citizens will continue to face shame and embarrassment. And S. Korea will continue to be regarded as “third world,” despite its modernization and attempts at globalized thinking. From now on, I will boycott “PyeongChang 2018 Winter Olympics” and S. Korean products and I will not visit S. Korea until the abuse of cats and dogs has finally ended. 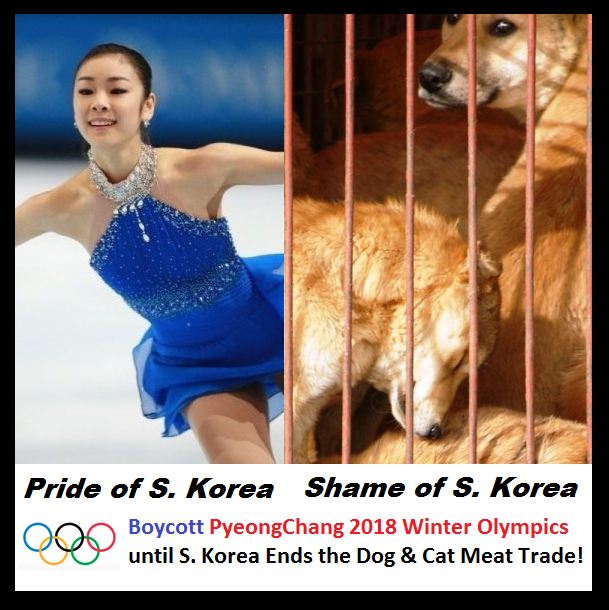