posted by KoreanDogs.org team on March 19,2016 in Action Alert, Campaign

We received the below response from the South Korean Supreme Prosecutor’s Office. 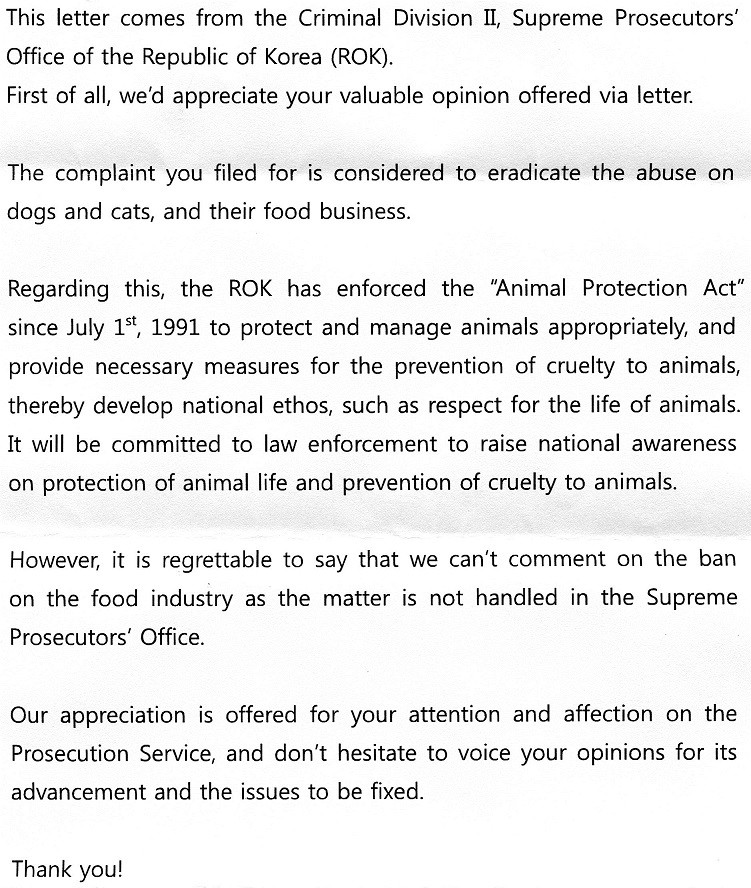 Response to our protest letter from the South Korean Supreme Prosecutor’s Office dated February 22, 2016 in English. 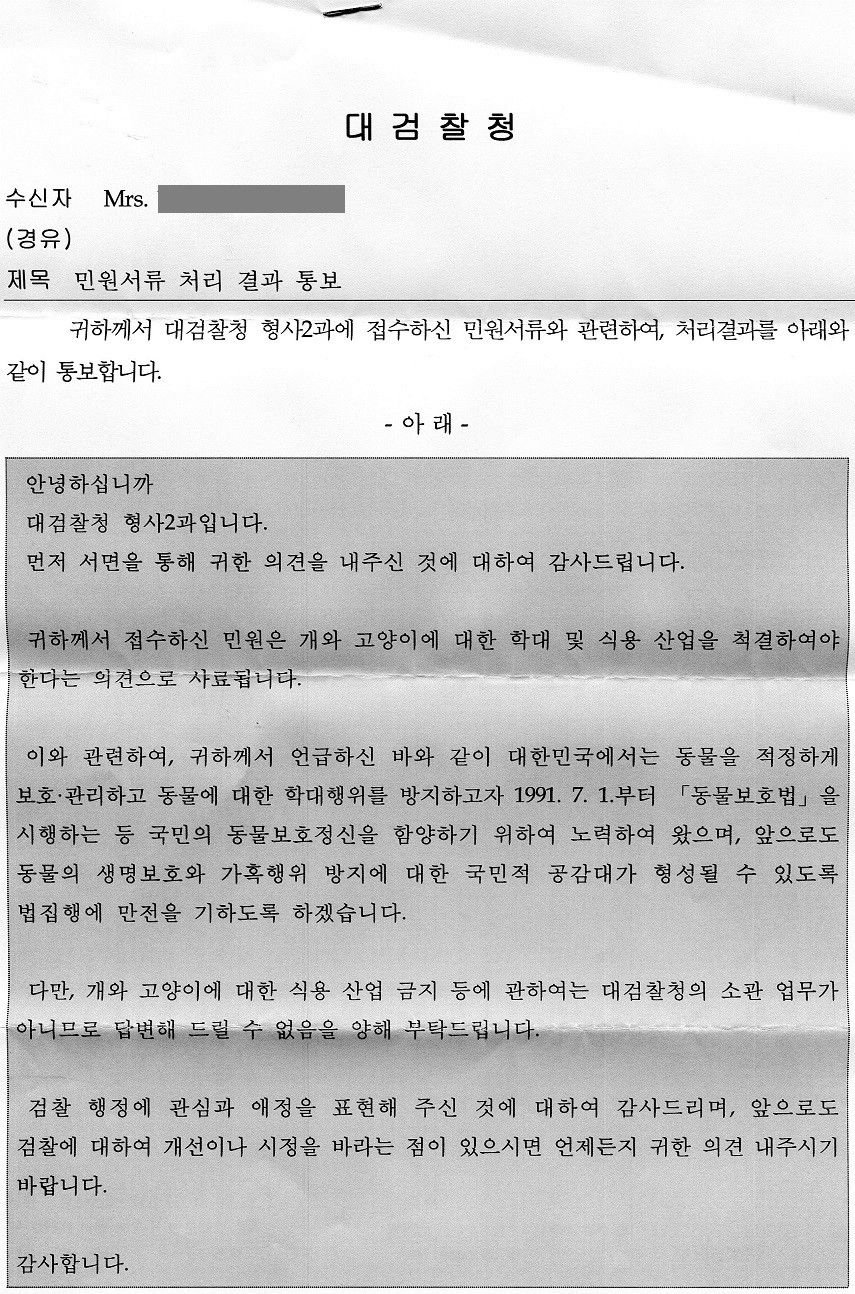 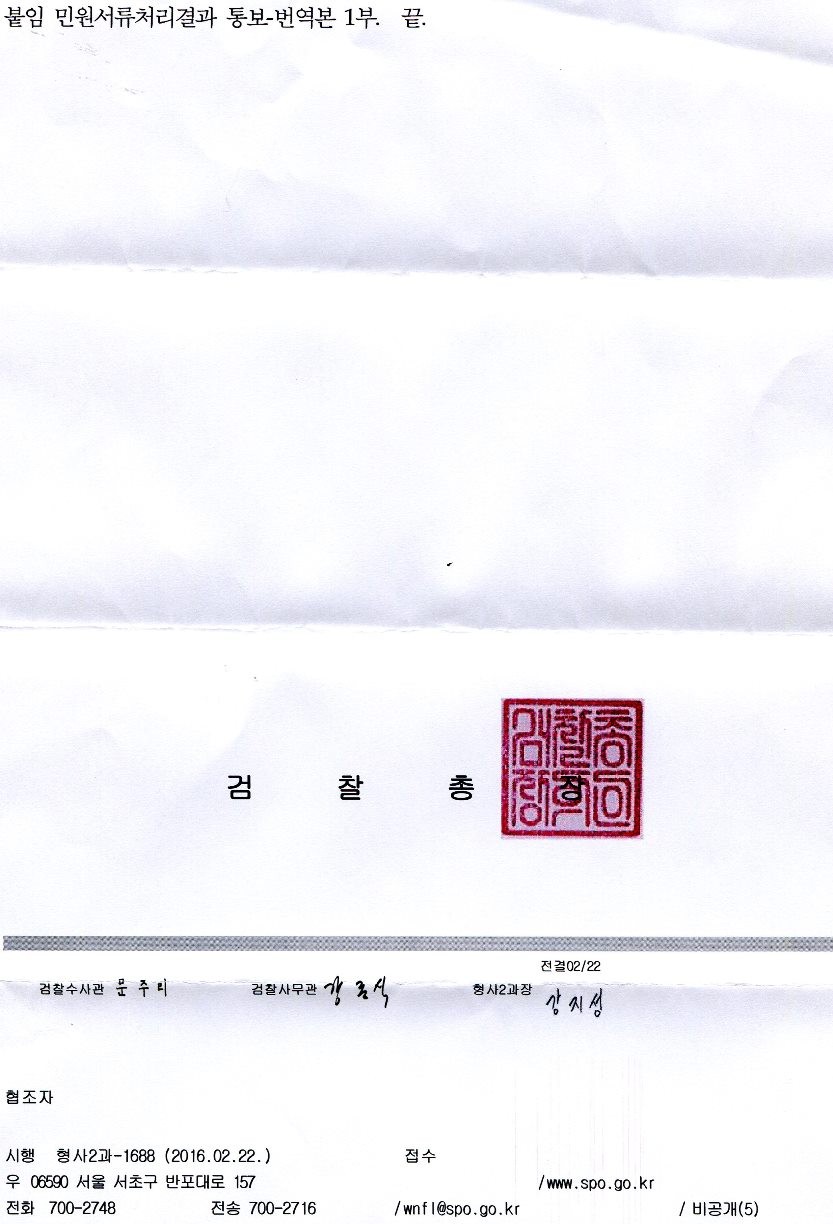 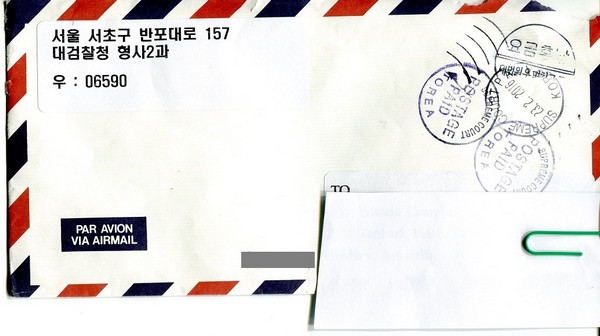 Below is our response and petition to the South Korean Supreme Prosecutor’s Office’s response.

In response to the petition letter we sent to the Supreme Prosecutors’ Office regarding the horrific violation of the Animal Protection Law that the illegal dog and cat meat industry commits, the response we received was beyond insufficient and unsatisfactory.

According to your website, your Mission Statement is “the establishment of law and order” and “Enforcing the law in a fair and consistent manner…. All staff of the Prosecution Service will spare no efforts for Righteous Prosecution Service for the Nation.”

Your organization was presented with facts, video evidence and witness testimonials regarding the rampant dog and cat meat industry in South Korea, an illegal trade that openly defies a law that your organization is bound to uphold and enforce.

In accordance with your mission we turned to you in order to secure justice and lawfulness in this matter, and this was your response:

“It will be committed to law enforcement to raise national awareness on protection of animal life and prevention of cruelty to animals.”

We are not asking just for raised awareness, we are asking for justice! We are asking you and your staff to do the job you vowed to do, and prosecute those who willfully break your laws and commit heinous crimes against domestic animals. We are asking you to do your job, and at the very least initiate an investigation into this illegal industry.

You state in your letter that:

“The ROK(Republic of Korea) has enforced the “Animal Protection Act” since July 1st, 1991 to protect and manage animals appropriately, and provide necessary measures for the prevention of cruelty to animals, thereby develop national ethos, such as respect for the life of animals.”

Answer me this, how and in what ways have you “enforced” this law? What measures have you taken to eradicate this trade? You purposefully turn a blind eye as millions of domestic animals are not only killed in your country, but purchased by a steady demand of your citizens. There is no way with all the evidence collected that you can deny this horrible fact.

Yet even when presented with this, you do nothing. When you have the power and honorable duty to uphold the law, you shamefully look away. The absence of morality and ethics ROK has shown regarding this matter is disheartening and disgraceful. If you, who are charged to uphold the law in South Korea fail do so, who else will? Please, we ask that you take a second look at this and investigate further into the blatant illegalities that are being committed daily in this trade, and the unimaginable suffering it inflicts on those you have vowed to protect.

[Your name and country]

Send a quick Twitter Message to the South Korean government.