Home / Blog / Puppies rescued from being boiled alive in Cheonan!

Puppies rescued from being boiled alive in Cheonan!

posted by KoreanDogs.org team on June 1,2015 in Campaign, News

Yes, puppies and kittens are still being boiled alive in South Korea – the nation of global brands such as Samsung, LG, Hyundai, Kia, Daewoo, SK,…

Below is a story shared by Nami Kim and the Korean activists on their Facebook page about a rescue of two puppies from being boiled alive. One is severely burned and currently being treated.

A little reunion, Milky’s brother Snowy visited his brother this afternoon. Milky was licking his brother. It is 8 pm now (Korea time) Milky is undergoing eye surgery right now. According to the eye specialist, nothing is certain at this moment as the cornea is badly damaged. The infection on the right foot seems under control, no amputation.
Had the vet checked on Snowy, very healthy, he is with me and will visit his brother often to cheer him up.

Will update on the two pups on weekly, thank you all for your concern. 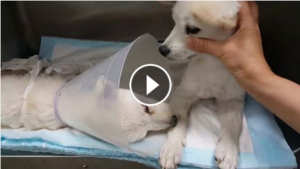 Milky is hospitalized in good hands, his brother Snowy will be with me this morning. The five months-old pups were inseparable, missing each other a lot. I am bringing him to the hospital to have them together for a while.

Dr.Kwon reports to me on Milky’s condition, eating and sleeping well, lots of pain killers, burns dressing twice a day. The hind right foot may have to be amputated. An eye specialist vet will examine the left eye this week to see if the eye should be removed.

Thank you all for the concern, this little angel will get well soon.
Click HERE for the Facebook posting! 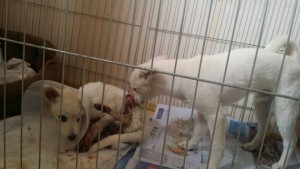 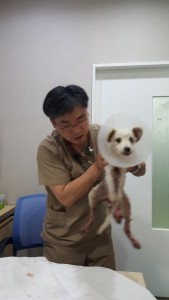 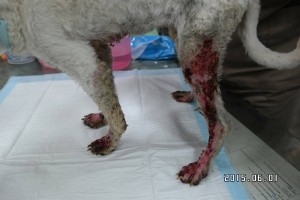 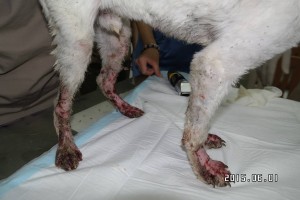 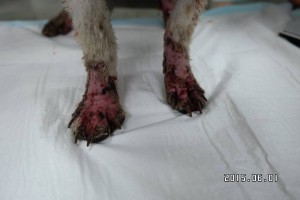 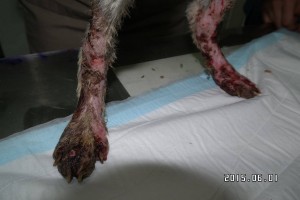 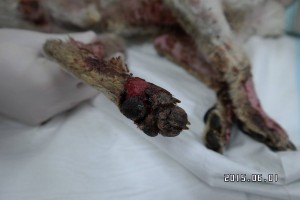 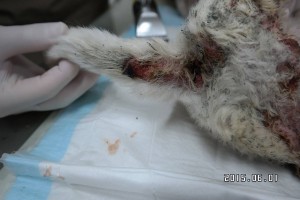 Milky was shivering all the way but remained quiet. This little good boy is taking the pain in silence.
As usual, such experiences make me look at dogs as enlightened beings and not as simply animals.
I have a fundraiser for the on-going campaign but the funds must be shared to make Milky live again too. Please help me pay for his medical bills. Click to donate: http://www.gofundme.com/v6wsh8
Click HERE for the Facebook posting! 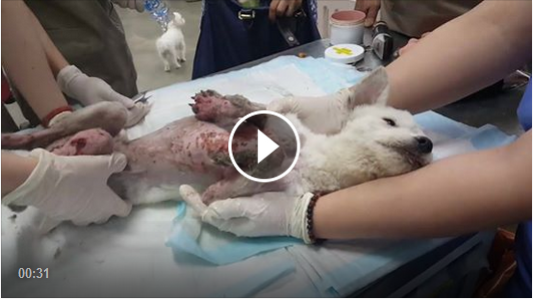 We named the pups Milly and Milky
Milky is the one who jumped out of boiling pot and his brother Milly is so caring about his brother that he has been licking the burns. Can anyone adopt the two together? It seems they are inseparable. It is going to take a minimum of one month for Milky to be treated with what is necessary.

We found a kind volunteer driver that will take Milky to the vet, Dr.Kwon, in Seoul today. The last photo is Ms.Lee, who rescued them both from the boiling hot pot. Applaud her for saving two lives for she is definitely the rescue hero of the month.
Click HERE for the Facebook posting! 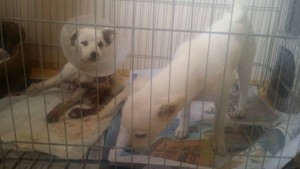 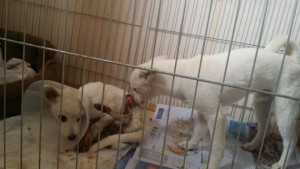 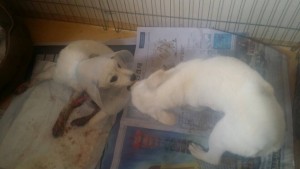 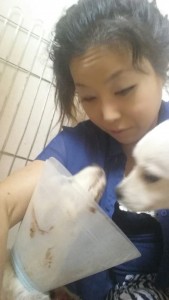 Milky
We named the boy Milky, who arrived in Seoul in the late afternoon. He was carefully being checked at the vet and will be hospitalized for a month. His hind right foot is infected, and may have to be amputated. Also, he may lose sight in his right eye, as it was damaged by the boiling water.

Milky will have to undergo many tests to see what can be done. Dr.Kwon, the vet in charge, Ms Lee who rescued Milky, the volunteer who drove Milky 160 km to the vet, and the nurses, all made a little miracle today.
Click HERE for the Facebook posting! 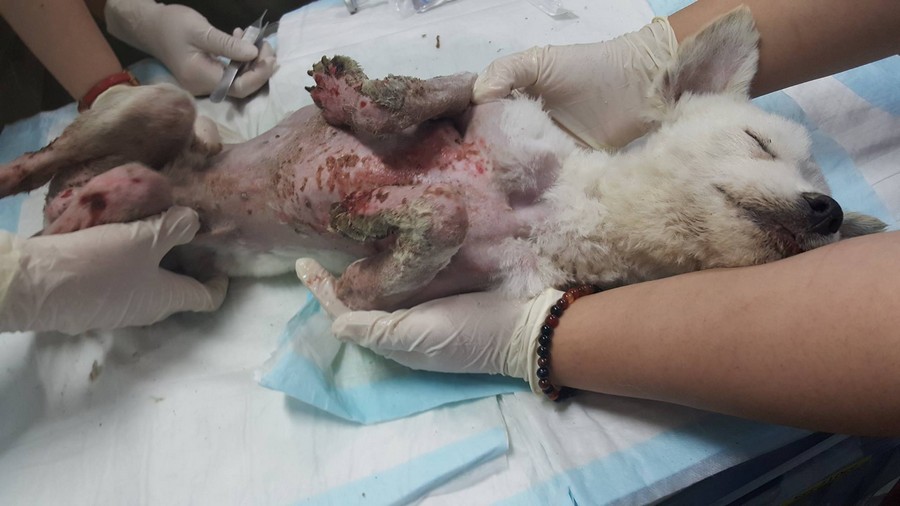 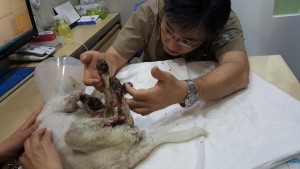 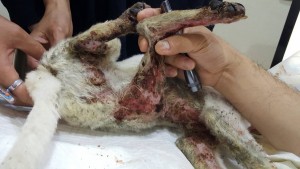 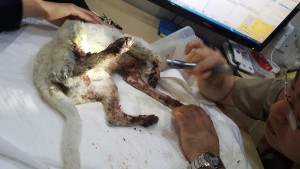 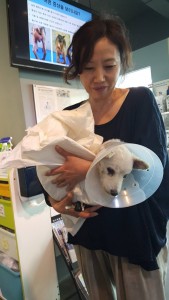 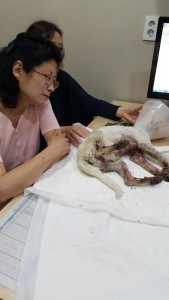 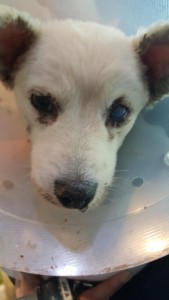 A Narrow Rescue From Being Boiled Alive
This is about a puppy just pulled out of a boiling pot by this lady yesterday. She is definitely the rescue hero of the month. She lives in Cheonan, 80 km down south of Seoul. She called 911 for help when she saw this puppy jumped out of the boiling pot. No name has been given to him yet but we are taking over the care of him and moving him to a vet in Seoul for special treatment for the burns on Thursday. Will update you on Friday.
Click HERE for the Facebook posting! 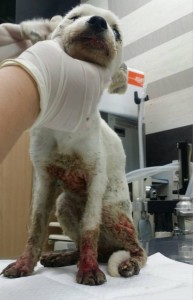 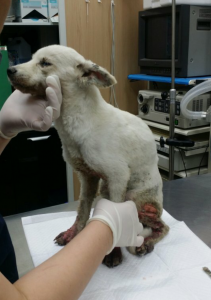 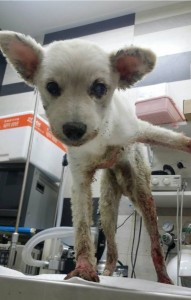 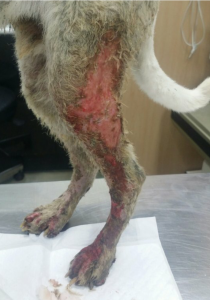 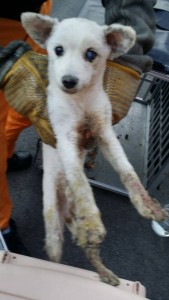 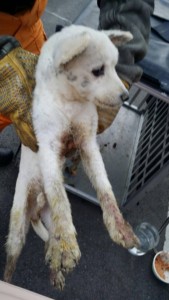 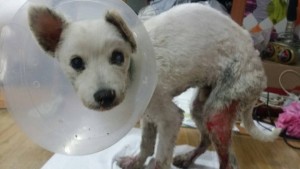