Home / Blog / “Register your dogs even in rural areas.”

“Register your dogs even in rural areas.”

posted by KoreanDogs.org team on September 8,2013 in News

“Register your dogs even in rural areas.”
Animal registration requirement expands to cities, districts in 2014…if do not register fine is 400,000 Korean won. 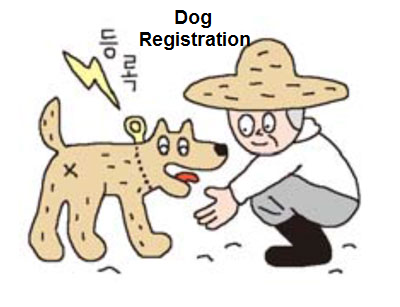 Even in rural areas, as early as next year if you raise a dog without registration with your city or district, a fine of up to 400,000 Korean won can be imposed.

On August 28, Ministry of Agriculture, Food and Rural Affairs (MAFRA) notified in advance of the revised legislation for the ‘Animal Protection Act Enforcement Rule’ to includes cities and districts with population less than 100,000 to become subject to the animal registration requirement.

As a result, despite the implementation of animal registration requirement which began this January, some metropolitan cities like as Gwancheon (population 71,000) and Dongducheon(population 97,000) which were previously exempted from this provision due to the population shortfall and most of the rural areas all over the country will now become subject to this provision of the Animal Protection Act.

Even for the rural residents, to raise a dog older than 3 months, this information must be reported to the relevant government agencies, and the attachment of internal and external identification tags become mandatory.

MAFRA explained in this advance notification that “the exempted area for animal registration requirement was too wide that its limitation in preventing animal abandonment and loss of animal was becoming apparent, therefore, decided to reduce the exemption areas to some islands or remote villages.”

In addition, MAFRA added a new requirement that when a dog is obtained, it must be registered within 30 days.

The current rules does not specify the ‘registration time limit’, causing constant disputes between the administrative offices carrying out enforcement and the dog owners.

In addition, the method for purchasing microchip has also changed allowing dog owners to purchase microchip on their own and only the dog registration is handled by the government office.

This is to prevent civil complaints that can occur regarding the addition of microchip implant cost to fees during the registration at the government office.

MAFRA did not announce when the new legislation will become effective in this advance notification but it is likely that the implementation will begin next year.