posted by KoreanDogs.org team on August 19,2018 in Demonstration

We are very grateful to Stephanie, Peter and Elissa Holman for organizing and Ollie, Victoria, Cathy, Debbie, Nami Marie (rescued by SaveKoreanDogs.org) who came and helped out at the Day 3 demonstrations on August 16th in Seattle. They demonstrated outside the South Korean Consulate to let the government know how strongly we abhor their indifference to the mass cruelty and suffering inflicted on sentient animals within the dog and cat meat trade. We also object to the failure of the South Korean government to bring about an end to this evil trade that profits from the suffering of animals.

Korean consulate general is in downtown Seattle across from Amazon.com buildings so there was quite a bit of foot traffic in the area. They were able to hand out many leaflets and have conversations with people about the horrors of the dog meat trade going on in South Korea. They also held up a banner for cars and buses going by to see. All of these actions helped spread awareness. Please watch the message from Stephanie’s live Facebook post. 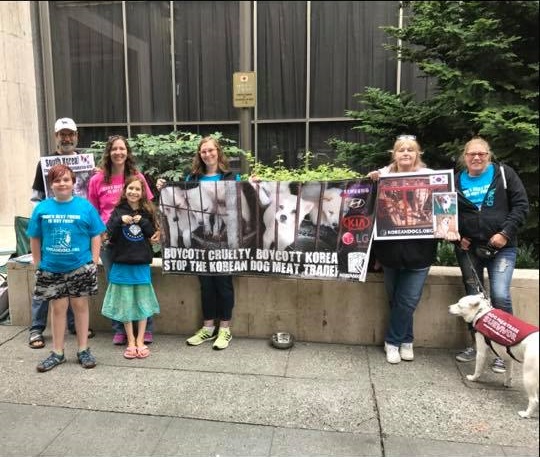