posted by KoreanDogs.org team on January 20,2013 in Uncategorized

Symbol of our nation, Jindo dogs. Although Jindo dogs have been maintaining its status as the national dog with government assistance, in reality driven by the trend of excessive national support and industrialization so many Jindo dogs are culled branded as “substandard” dogs. Dogs that are not purebreds are easily flowing into dog meat industry in our society where the dog meat consumption culture remains and the fact that some of the Jindo dogs are being used for meat is a well known fact in Jindo (Jeollanamdo-Province). To grasp the reality of Jindo dogs, KAWA (Korean Animal Welfare Association) went on location in Jindo couple of times (March and July 2009) to covered the story. [Editor’s words]

The story of Jindo dog Baekgu (meaning “white dog”), finding its way home after being sold in Daejeon by travelling 300km for 7 months in 1993, is a representative anecdote that explains the Jindo’s loyalty and homing ability.
Jindo, Jindo dog protection area and location of the last resistance of Sambyeolcho (a special capital defense unit), as well has been an image of bastion that maintained pure blood through many foreign invasions in our nation’s history.

Jindo firmly continued its status as national dog with its designation as a natural monument in 1961 and the enactment of Jindo dog Protection and Promotion Act in 1967. Recently Jindo County’s Jindo dog promotion project is leading into the pet dog industry revitalization. In 2008, Jindo Dog World Festival Dog Show was held in Jindo county with the goal of correct understanding about the world-known Jindo dogs and the propagation of pet dog culture.

Office of Jindo Dog Breeding’s budget has increased to 5,924,699,000 KRW ($5.6million USD) in 2009 compared to 2,148,818,000 KRW ($2million USD) in 2008 and a new budget item, that didn’t exist in previous year, was added in 2009. (Jindo Dog Theme Park Development Project, Jindo Dog Breeding and Management Center Construction, Jindo Dog Promotion Center Construction, etc) However, in any society, expansion of pet dog industry involves the creation of breed specific standards and the culling operation of dogs that deviates from this standards.

Since 1990s the spread of pet dog culture is creating problems of numerous dogs pouring into the streets and being neglected but in our country where the dog meat consumption remains we can’t overlook the fact that these dogs are being flowing into the dog meat industry. 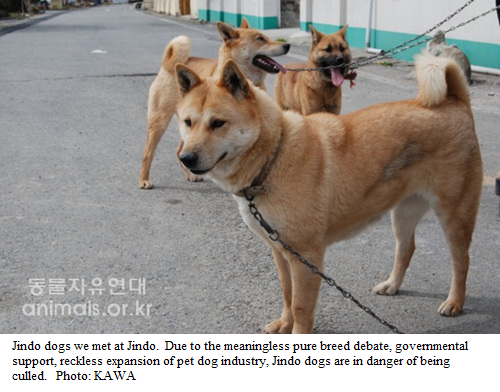 Until now the suspicion about pet dogs being handed over as dog meat was constantly being raised.
In 2007, a confession by a former director at a provincial homeless animal shelter that he has been supplying abandoned dogs as dog meat due to the demand by the government officials sent a ripple through the society. (Yonhap News Agency, 7/19/2007 article)

In 2004, Australia exported surplus dogs from their dog racing industry to Asian countries and the fact that among these dogs, most of the dogs exported to Korea was used for dog meat soup is a public knowledge. (Yonhap News Agency, 11/3/2004 article)

In 2008 during the Ministry of Food, Agriculture, Forestry and Fisheries’ meeting to discuss the implantation microchip on pets, an official remarked, “Given the reality of our food culture that eats dog meat, we have to verify the safety of microchip in the cooking process.” (Electronic Newspaper, 4/16/2008 article)

This means that the suspicion about pet dogs being used for meat is not a suspicion but could be an ‘open fact”. 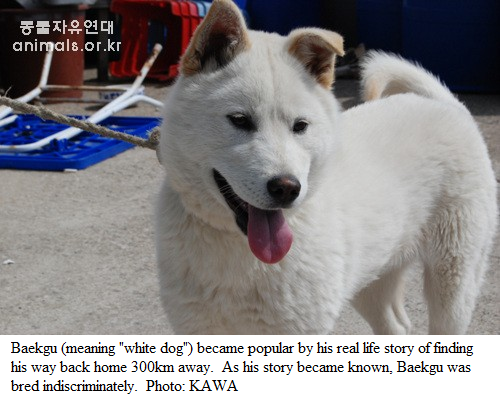 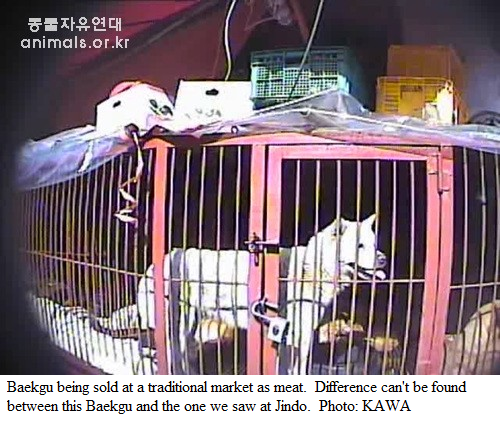 First of all, culling of so called “Substandard dogs” involves distinguishing purebred. This is differentiating mixed breeds by distinguishing purebreds, a strategy to raise the price of the purebreds for commercialization. As people’s opinion about Jindo dogs symbolizing our nation’s pure-bloodedness strengthens, there has been numerous purebred debate. Jindo-related organization around the country are each holding dog shows according to their own standards. Therefore, often these shows become chaotic with people who are dissatisfied with the evaluation results and protesting. (Jindo Newspaper 10/30/2008 “Violence, profanity, complaints Chaotic Jindo Dog Show”)

According to the Korean Jindo Dog Protection and Promotion Act and the Jindo County ordinance, Jindo dog owners within the Jindo protection area are supposed to receive two screenings per year. As a result of these screening, dogs that are determined as meeting the standard body type according to the provisions are registered and microchip is implanted. Those that doesn’t can be culled.

On March 11, we attended one of the two public screenings that are conducted each year. Screening is conducted around the village by the judges pre-selected by the county accompanied by a staff at the Office of Jindo Dog Breeding and a veterinarian. Screening is conducted by community hall calling residents through its broadcasting and the residents voluntarily bringing their dogs. Judges visually examine the body type, personality, appearance, teeth and if the dog is determined to be a good Jindo than a microchip is implanted on its neck on the spot.

Based on scoring criteria of general appearance 28 points, stature 25 points, cephalus 30 points, bloodline 7 points, miscellaneous 10 points, total points of 60 out of 100 points is the borderline for passing. However, Jindo dog’s standard body type according to the Jindo dog standard body type examination is actually very subjective. For example, the case of the head and face, “when viewed from the front the forehead has to be broad and between the ears has to maintain an adequate distance.” In case of ears it states, “it must be in the shape of triangle and blend well with face, movement is very vigorous and stand bowing forward.”

The judges on location is explaining that the criteria in judging good Jindo dogs is ” a standard that general public can understand” but that standard is merely based on how healthy and handsome it looks. 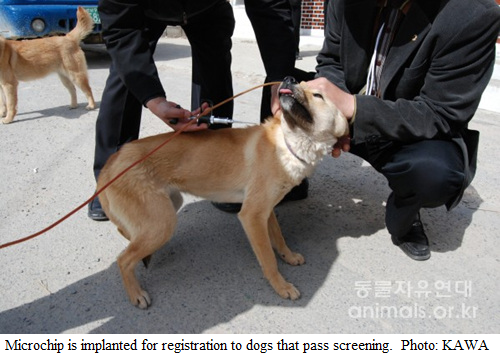 If so, how are the so called “substandard dogs” handled? Even if your dog is a substandard dog, you can consider him as your companion animal and live together for the rest of his life. However, when the dogs, symbol of Jindo county and started to be bred because of the government and the county’s propaganda that it can revive the local economy, gets troublesome, sick or rejected not able to be registered what would they do with them? Residents all had the same answer. “We sell them”.

Who is buying these dogs that do not meet the criteria, not attractive and lost commercial value? Residents we met in the screening process told us that there is a trader that pass through this village periodically. One resident told us that the trader would pass through the village more often at least every 3-4 days during the summer “Boknal” (Dog days of summer when the dog meat consumption is at peak). We decided to check it out. 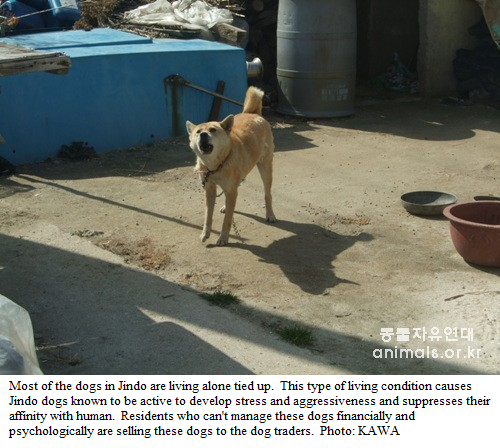 We decided to wait for this dog trader from July 7 through 9 at a village. And on July 9, we were able to witness the trader that was driving around the village buying dogs. On his truck in a cage there was a dog wearing collar that we think was raised at someone’s house. The trader was buying off the dogs for 100,000KRW ($94 USD) to 200,000KRW ($187 USD) depending on the condition of the dogs. 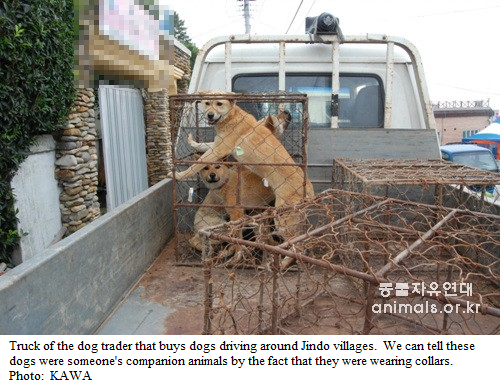 Selling so called substandard dogs to the dog trader was an open secret in Jindo. Even though the residents did not openly talk about this, everyone was admitting it as a fact and they were not particular feeling guilty about it.
However, this is not because residents are immoral but because this has been a common practice for a long time. 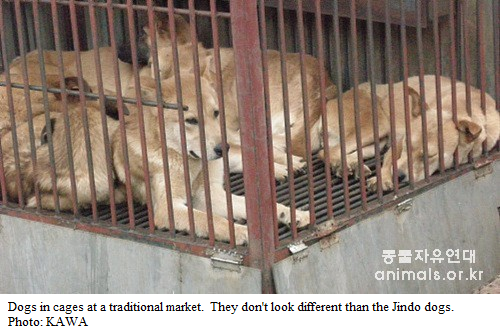 Occasionally we witness dogs in the cages of traditional markets that are not that different than the Jindo dogs we saw at the Jindo county. Numerous dogs are left behind and being used for dog meat soup with justification of meaningless pureblood debate and boosting pride of national dog. Our dogs are being culled and discriminated solely for not being handsome. Most of all, taxpayer’s money is being spent in this process. With the meaningless justification by our government about building national pride, only certain people are profiting from the expansion of this industry.