posted by KoreanDogs.org team on March 4,2019 in Action Alert, Campaign

In Seoul Dongjak-gu, there are countless markets and restaurants, where there are dogs suffering, they are tortured their entire lives and slaughtered in the most inhumane ways, such as by electrocution, hanging or beating; and then thrown into boiling water – sometimes while they are still alive, the meat is then sold to consumers. Many of these dogs are abandoned and stolen former pets, and they end up in the dog meat industry, these dogs are subjected to the same cruelty. 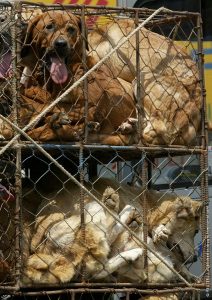 Two search results on Naver (the most popular search engine in Korea) – the first one was for so-called “Health Centers,” which commonly sell dog elixirs and cat elixirs (also known as dog soju and cat soju); and the second one was for “dog meat restaurants”: 131 Health Food Shops and 80 dog meat restaurants in the vicinity of Seoul Dongjak-gu.

Even if half of these ‘Health’ Centers and restaurants serve dog and cat ‘ingredients’ in one form or another, imagine how many dog/cat slaughterhouses must be in the vicinity of Seoul Dongjak-gu to supply these outlets.