Mayor Matthew Marchant of Carrollton: Tell Sister City, Guri, South Korea, That We’re Opposed to the Torture and Consumption of Dogs and Cats.

If you want to help fight the grisly South Korean dog and cat meat trade and make a difference in South Korea, here are a few quick actions you can take that could save millions of dogs and cats each year.
Guri became Sister city with Carrollton in 2010.

Guri is one of the largest dog meat consumption areas in South Korea. There are countless dog slaughterhouses, markets, and restaurants where the dogs, who have been tortured their entire lives, end up being slaughtered in the most inhumane ways, such as by electrocution, hanging, or beating, and then thrown into boiling water – sometimes while they are still alive. In many places, dogs are being killed in full view of other terrified, caged dogs; and this takes place in public and in broad daylight. In addition, many abandoned and stolen former pets end up in this industry and are subject to the same cruelty.

The searches resulted in dozens of 83 Health Food Centers; and 34 restaurants in the vicinity of the city of Guri alone.

Even if half of these ‘Health’ Food Centers and restaurants serve dog and cat ‘ingredients’ in one form or another, imagine how many dog/cat slaughterhouses must be present in the vicinity of Guri to supply these outlets. 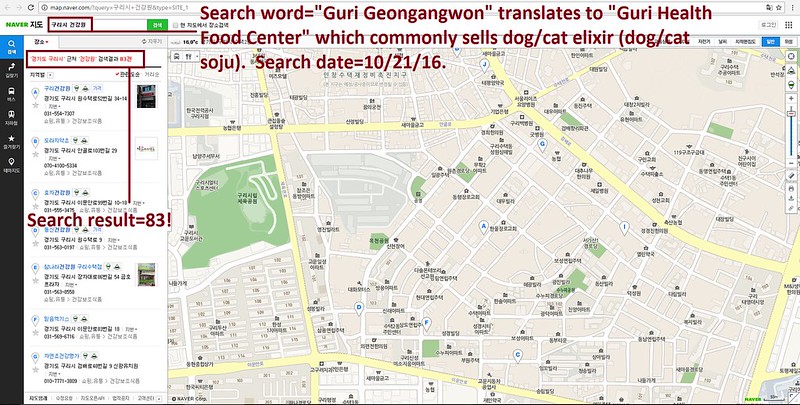 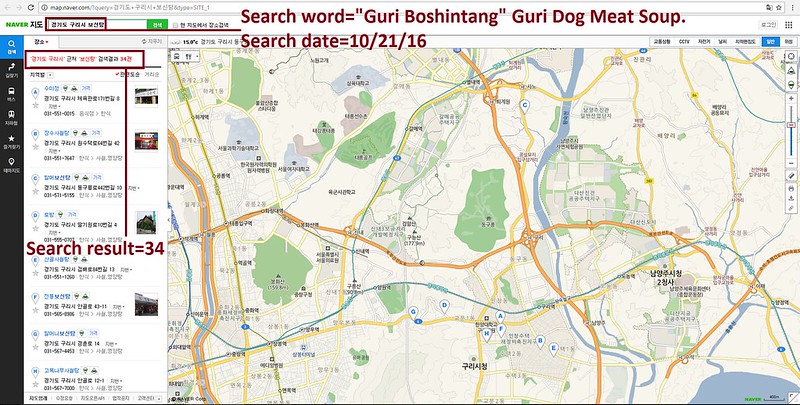 The Mayor of Guri City aspirationally states that Guri striving to be a “world-class city”. His goal is for Guri to become the education and culture-oriented centre in the eastern part of Seoul and he describes it as an “environmentally friendly culture”. We are afraid that, once you peel back the gloss of this historical and culture-orientated city, there is none of that focus or aspiration when it comes to how this City and its residents treat the dogs and cats that live there too!

How can a City which fails to tackle the brutal and medieval dog and cat meat trade in its own backyard be “world-class” or indeed “environmentally friendly!” The ambitions of this City and what it puts into practice are completely juxtaposed! Guri is host to dog and cat meat restaurants as well as farmers and butchers unconcerned with animal welfare, care for the environment or indeed, even the safety of their own customers when it comes to serving up cats and dogs for human consumption. If Guri truly wishes to meet its ambitions and to indeed become a “world class city” then it needs to take action NOW to stop the operation of the restaurants, butchers and farmers operating in the sickening, cruel and internationally condemned dog and cat meat trades.

Help us to tell Guri what the meaning of “world class city” truly is, that is, one where the barbaric dog and cat meat trades are extinguished for good! Help us Tell Guri the world is watching!

Dear Mayor Matthew Marchant and the members of the City Council,

Guri is one of the largest dog meat consumption areas in South Korea. The Korean internet searches resulted in: 83 Health Food Centers which commonly sell dog/cat elixirs (also known as dog soju and cat soju); and 34 dog meat soup restaurants in the vicinity of the city of Guri alone.

Carrollton should not be a Sister city to any city that allows dogs and cats to be tortured and eaten. Please urge Guri Mayor Kyung-Hyeon Baek to close down all illegal dog farms and slaughterhouses, markets, truckers, and restaurants that serve their products. An online petition calling for your support in ending the horrendous South Korean dog and cat meat cruelty is in progress: https://www.change.org/p/mayor-matthew-marchant-of-carrollton-tell-sister-city-guri-korea-that-we-re-opposed-to-torture-consumption-of-dogs-and-cats
The favor of your reply is requested.
Thank you,

No matter where you live, PLEASE SHARE these actions with your friends, especially those who live in Carrollton!