posted by KoreanDogs.org team on December 12,2016 in Action Alert, Campaign

[Update December 31, 2016] Ms Nauser, a councilman of the City of Columbia replied to our campaign/petition, urging Columbia to contact their Sister City of Suncheon, in South Korea.

She advised us that she understands that Suncheon has “moved to ban this hideous activity” [of the dog and cat meat trades]. Ms Nauser also publicly stated that they should “not be associated with any place that consumes dogs”. We are very grateful to Ms Nauser for this public confirmation, and for making it clear that “This practice certainly does not meet our [City of Columbia] community values.” They are now looking further into this matter, and we wrote to them again, asking if they could forward to us some confirmation of the result of this inquiry. Click HERE to learn more.

Mayor Brian Treece of Columbia: Tell Sister City, Suncheon, South Korea, That We’re Opposed to the Torture and Consumption of Dogs and Cats.

In Suncheon, there are countless dog farms, slaughterhouses, markets and restaurants where the dogs, who are tortured their entire lives, end up being slaughtered in the most inhumane ways, such as by electrocution, hanging or beating; and then thrown into boiling water – sometimes while they are still alive. In many places, dogs are being killed in full view of other terrified, caged dogs; and this takes place in public and in broad daylight. In addition, many abandoned and stolen former pets end up in this industry, and are subjected to the same cruelty.

The searches resulted in: 165 Health Food Centers; and 27 restaurants in the vicinity of Suncheon.

Even if half of these ‘Health’ Food Centers and restaurants serve dog and cat ‘ingredients’ in one form or another, just imagine how many dog/cat slaughterhouses must be present in the vicinity of Suncheon in order to supply all of these outlets. 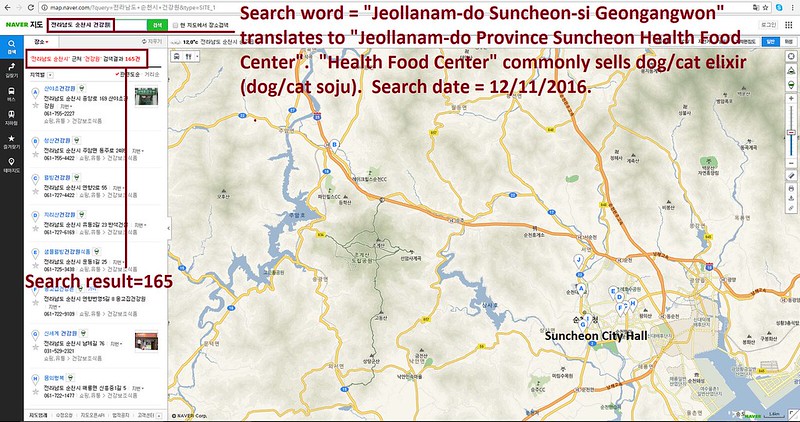 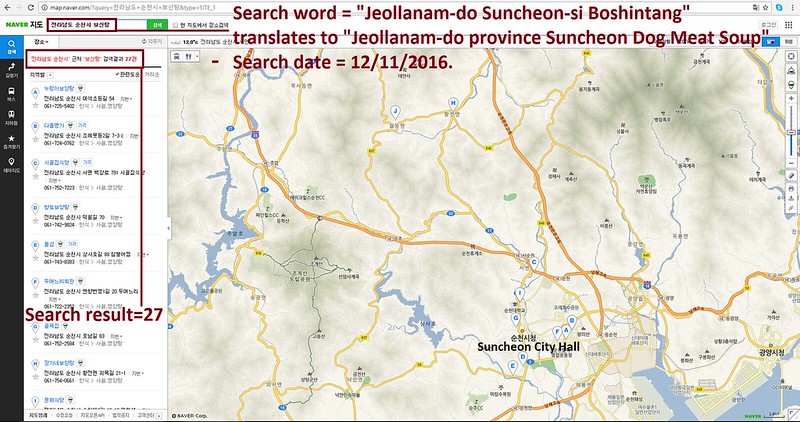 No matter where you live PLEASE SHARE these actions with your friends – especially those who live in Columbia!