Site of illegal dog slaughtering on a hillside in Goyang-city 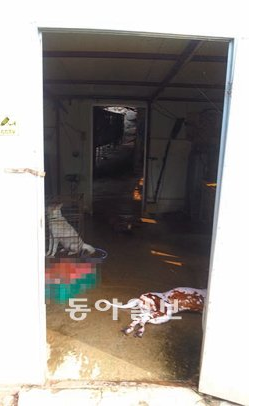 There were already 3 dogs with their fur removed on the ground. A white dog that while waiting for his turn witnessed the slaughter of other dogs is terrified that not only he isn’t barking but he can’t even look me, the stranger reporter, in the eye. Electrocution device hanging on the wall, the water injection hose and round hair removal machine is frightening enough to make anyone shudder.

July 9, 2012. This is the scene of a work area at an illegal dog slaughterhouse located at a hillside of Goyang-city, Ilsandonggu seongseokdong Gyeonggido-province. Filled with foul odors, this is the place where the owner got caught on charge of pocketing unfair profit by using the technique of increasing weight of slaughtered dogs by filling up the blood vessel with water.

In the yard, more than 10 dogs trapped in wire cages were screaming and the five cast-iron cauldrons were steaming. This is where the slaughtered dogs are boiled. 5 bags of dog foods neatly piled up in a temporary building next to the slaughter area showed that this illegal dog slaughter has been going on for awhile.

A truck entered the farm/slaughterhouse and a men looks to be in his 50’s got off the truck and sharply reacted by asking “Who are you?”. 2 workers wearing long plastic aprons ran out of the slaughterhouse after hearing the noise. This is shortly after the charge is filed for the slaughterhouse owner so the atmosphere was rough. When we asked why they injected water into the dog’s blood vessel, they claimed, “We washed the blood inside the blood vessel with water and it’s unbelievable that we are being accused of inflating the weight.”

This farm is registered as a meat seller on paper but is actually a slaughterhouse for slaughtering dogs. They were all unauthorized buildings without permit from the administrative agency. On July 6, 2 people including the farm owner Mr. Bae (50) were charged on suspicion of setting up an unlicensed slaughterhouse and selling slaughtered dogs after inflating their weight by injecting on average 1.5L of water to each dog by connecting a specially designed high pressure water hose into their blood vessel. They are accused of inflating the weight of dogs by approximately 1,800g per dog. The workers claimed that they slaughter about 3 or 4 dogs per day. However, the illegal slaughter continues because the Goyang-city administrative agencies have not taken a measure to close down the slaughterhouse.

It is known that this farm was fined 3,000,000 Korean Won (approximately $2,600 USD) last year on charge of discharging wastewater into the nearby river. Mr. Bae and his workers have illegally slaughtered more than 730 dogs from July last year to recently. According to the police, they distributed these dog meat to the local restaurants within Goyang-city and pocketed unfair profit of 210,000,000 Korean Won (approximately $180K USD). They are also accused of unauthorized discharge of wastewater created in the process of dog slaughtering and water injecting to the nearby river.

Goyang-city official said, “We will soon demolish these illegal buildings and shut down the business. It’s difficult to sanction for illegal slaughter using the current law. Administrative penalty is possible only on the unauthorized discharge of sewage.” Another official added, “With the upcoming busy dog meat season, it’s concerning that the dogs slaughtered at a place outside any legal restriction and sanitation surveillance are being distributed into the market.”

[Description of photo] July 9, 2012. At an illegal dog slaughterhouse located on a hillside of Goyang-city, Ilsandonggu seongseokdong Gyeonggido-province, a dead dog is lying on the ground with his hair partially pulled out. In a cage right next, a live dog waiting to be slaughtered is looking at the dead dog.