posted by KoreanDogs.org team on January 4,2016 in Action Alert, Campaign 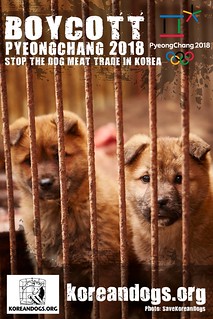 Global nations who are chosen to host international events, especially the International Olympics, not only attract global attention, gain international renown and of course, profits, but also come under critical worldwide scrutiny. The prevalent barbaric treatment of animals will not escape this scrutiny. Many countries who will participate in the Olympics have animal welfare laws with strict enforcement of violations, and most certainly, the illegal dog and cat meat industry will create a global outcry against the treatment of companion animals and the appalling fact that these animals are actually farmed for human consumption, and live their short lives in inhuman conditions, not to mention the horrific ways they are slaughtered.

The 2018 PyeongChang Winter Olympics is just around the corner and this is the perfect time to ask the International Olympic Committee (IOC) to urge South Korea to stop the brutal torture and killing of creatures, known universally as companion animals, by ending the horrendously cruel dog and cat-meat trades, not only for the duration of the Olympics, but permanently.

Make a call, send a quick online message and a postal letter to the IOC asking for their moral and ethical consideration in helping to end the dog and cat meat trade in South Korea.

Suggested phone message to the IOC – #1:

I am calling to ask for your Committee’s help, in regard to the upcoming PyeongChang Olympic events being held in South Korea, in 2018, which will take place despite the horrendous animal cruelty that will carry on around that country, in all areas of the aberrant dog and cat meat trades; trades which the South Korean Government turns a blind eye to.

Please, for moral and ethical reasons, will you contact your South Korean counterparts and denounce these trades, and urge action by their Government to put an end to dog and cat meat consumption before the 2018 games, and to ensure it is a permanent end.
Thank you.

Suggested phone message to the IOC – #2:

In your response to our campaign against the dog and cat meat trade in South Korea, you replied that sports events were your only concern, and not the practices of the country chosen to host this international event.

The athletes participating in the Olympics are representatives/ambassadors of their country. To ignore the hideous cruelties against companion animals in the hosting country, would be an acceptance through silence. Are the participating countries in the 2018 Olympics in South Korea aware that these atrocities are being committed by the Olympics host country? I think not.

One action, through formal correspondence to the South Korean government by the Olympic Committee, stating the vehement disapproval of the dog meat industry, may contribute to the end of the dog and cat meat trade. Please do your part, which may help save millions of dogs and cats in South Korea. The International Olympics is an ancient event, which brings together the countries of the world in brotherhood and humanity. Please demonstrate this humanity. Thank you.

We believe that an important, far-reaching action – for environmental, health, social and ethical reasons – would be to work towards ending the dog and cat-meat trades in South Korea. And preparations for the PyeongChang 2018 events would be the perfect time to do so.