posted by KoreanDogs.org team on August 15,2017 in Action Alert, Campaign 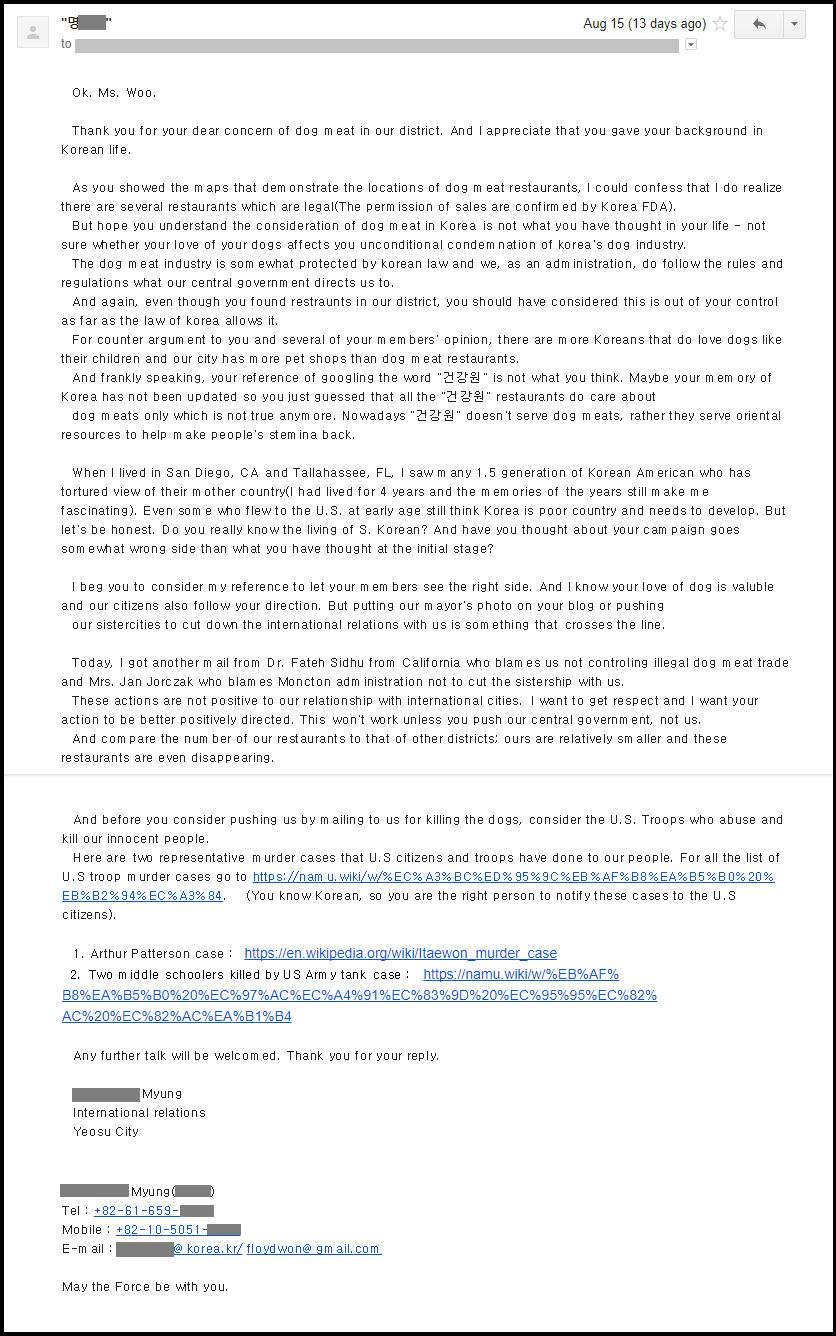 Below is our response that was sent to Mr. Myung on August 26, 2017. Copies were sent to Yeosu’s Friendship Cities.

Thank you for responding to our campaign against the dog and cat meat trade in the city of Yeosu.

You stated that the dog meat restaurants operating in your city are legal and that they have permission to operate from the Korea Food and Drug Administration (FDA). But how can this be possible when the Food Sanitation Act, Article 44, Section 1, Clause 1, under the FDA states that “Uninspected livestock products must not be transported, stored, displayed, sold or used for manufacturing or processing of food for human consumption”? Are the dog carcasses used by Yeosu’s dog-meat restaurants inspected by government authorities? (https://koreandogs.org/karas-legal-information-booklet-ending-dog-meat-consumption/)

How can the dog loving citizens of Yeosu allow the dog meat industry to cruelly abuse and brutally slaughter dogs? The argument that there are separate “meat dogs” and “pet dogs” is nonsense and is not accepted by the rest of the world. Just because dogs are raised to eat does not make them special “meat dogs” or different from any other kinds of dogs. In any case, all breeds of dogs, including many abandoned former pet dogs, end up being killed by the dog meat industry.

You stated that the Geongangwon (Health Food Shop) ”doesn’t serve dog meats”. But in fact there are Geongangwon that sell dog elixir (dog soju) located throughout Yeosu especially around traditional open air markets. Even if a small percentage of these Geongangwon sell dog/cat products, that could mean a significant number of shops when there are a total of 202 in the vicinity of your city.

Mr. Myung, our campaign is based on facts and the reality of what is happening in South Korea today. We are campaigning to urge both central and local Korean governments, as well as Korean companies and other organizations that have relationships with Korea, to shut down the dog meat industry.

While I do understand that this issue is not easy to resolve, neglecting what you can and must do means that nothing will change and that millions of dogs and cats will continue to suffer and die every year. If the Korean government continues to neglect its duty of enforcing laws to protect the animals and fails to show moral leadership for Korean society, then Korea will continue to be the target of condemnation and criticism.

So I urge you to please deliver our message to your mayor and for your government to start enforcing the laws seriously and properly to end the dog meat industry. 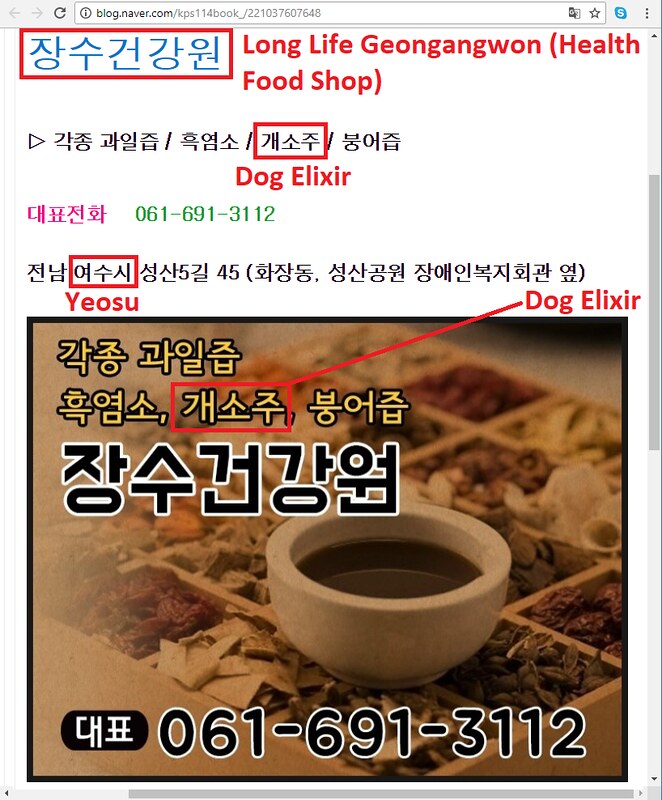 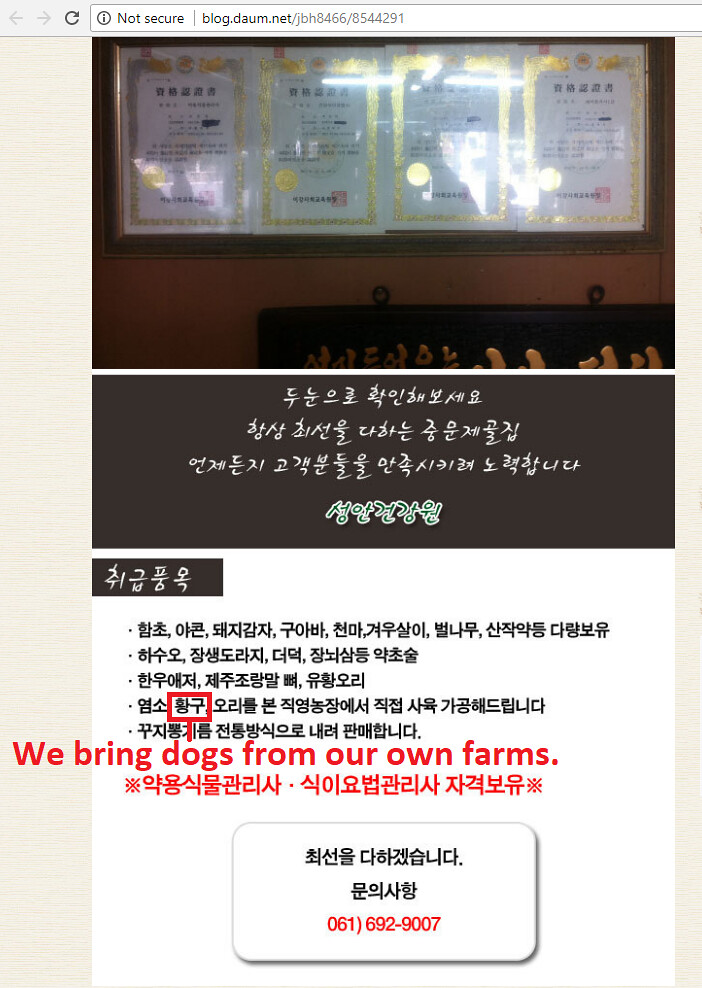 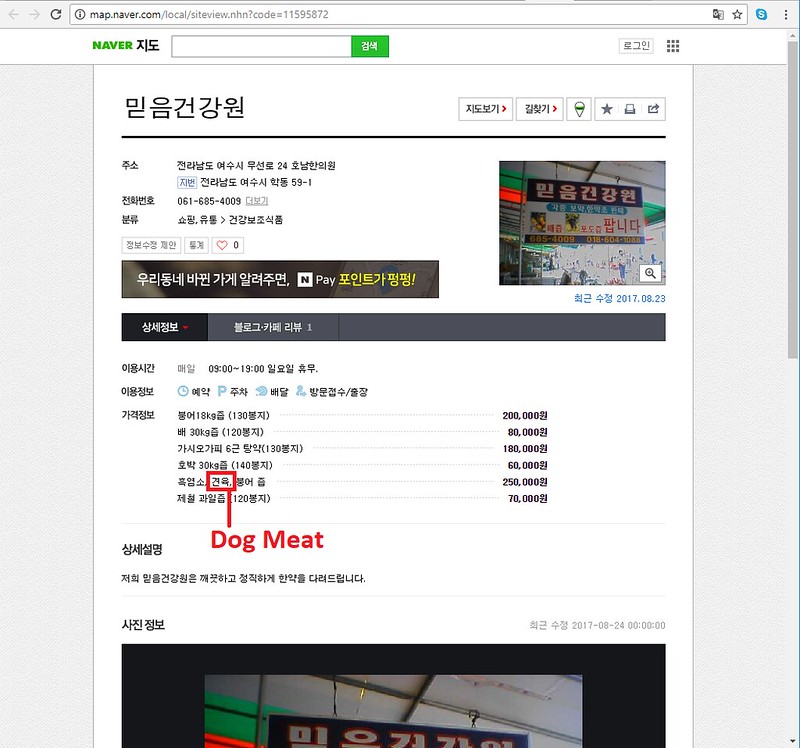 Below is another response we received from Mr. Myung on August 28, 2017.

Click HERE for the link Mr. Myung shared on his email.

We received an email from an International Relations representative from Yeosu regarding our three Friendship City campaigns urging Yeosu’s Friendship Cities to speak out against the cruel and illegal dog meat industry in Yeosu. 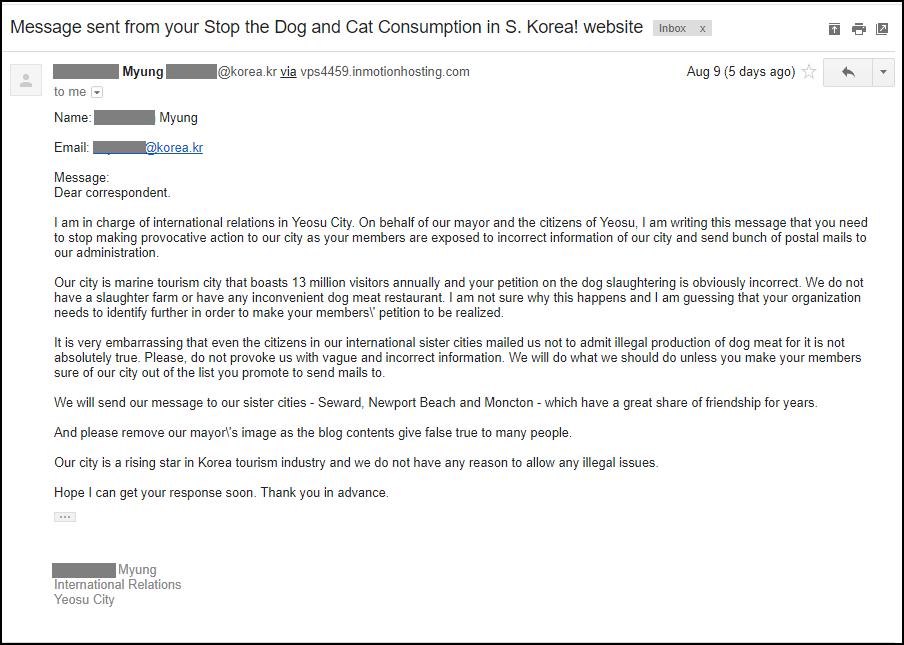 Below is our response that was sent to Mr. Myung. Copies were sent to Yeosu’s Friendship Cities.

Thank you for responding to our campaign against the dog and cat meat trade in the city of Yeosu.

Our campaigns are based on facts and honest research. We have found that the illegal dog meat industry does indeed exist in Yeosu and your city appears to be doing nothing about it.

Also, here is a google search for “Yeosu and Dog Meat Soup”: https://goo.gl/F4J1wE

Apart from the above maps showing dog meat businesses in Yeosu, here are some blog pages that advertise these businesses:

Dog-meat consumption is not legal in South Korea. However, the majority of Koreans show a profound indifference to both the law and moral principles by doing nothing at all to stop the illegal dog-meat trade. Dogs are being brutally tortured and eaten as if it were completely legal.

The following link has a translation detailing the illegal status of the dog meat industry in Korea provided by the Korea Animal Rights Advocates:
https://koreandogs.org/kara-publishes-legal-information-booklet-ending-dog-meat-consumption/
(In Korean: https://www.ekara.org/activity/against/read/7537)

Therefore, all the restaurants in Yeosu that sell dog meat/elixir products are operating illegally. What is Yeosu doing to enforce the law and shut down these illegal businesses?

You claim there are no dog farms/slaughterhouses because there are no government records, regulations or oversight for dog farms/slaughterhouses in Korea. But that does not mean that dogs farms do not exist. Local dog meat businesses obtain dog meat from large factory farms or homes that breed dogs to make money. In reality, your government is aware of the dog meat industry but turns a blind eye to it, and no one is protecting dogs from cruel treatment and slaughter.

Mr. Myung, I grew up in Korea, and I’m fluent in Korean and very familiar with Korea’s dog meat industry. No one has challenged the Korean government regarding this illegal and cruel industry the way we are doing with the Sister/Friendship City campaigns because people do not want to upset Koreans. We have no choice but to continue our campaign because the Korean government will not take steps to end this horrific and illegal industry.

We look forward to your positive response. 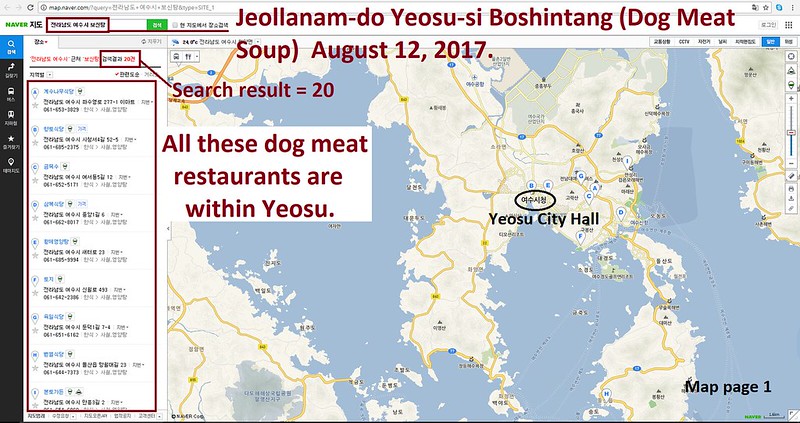 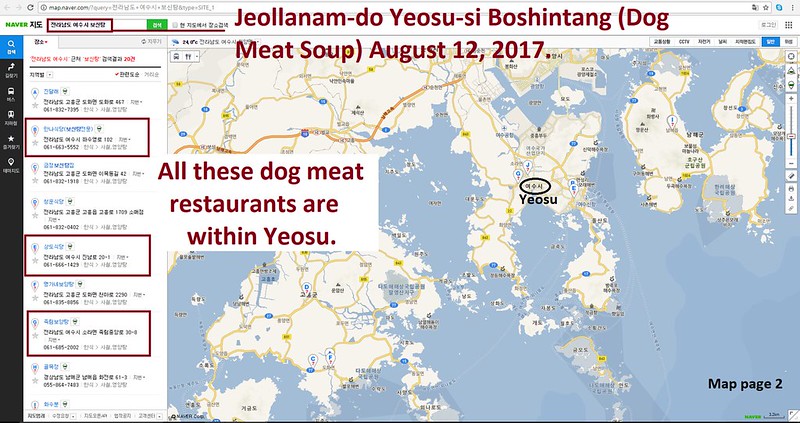 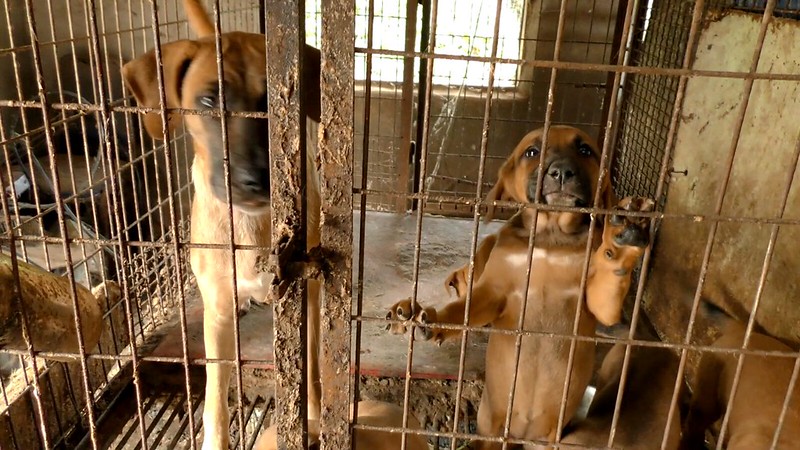