Home / Blog / Yongin: Gunshot killing of stray cats! Illegal capture and brutal slaughter of stray dogs! We will report this man to the police!

Yongin: Gunshot killing of stray cats! Illegal capture and brutal slaughter of stray dogs! We will report this man to the police!

posted by KoreanDogs.org team on January 3,2014 in Event, News

Gunshot killing of stray cats! Illegal Capture and Brutal Slaughter of stray dogs!
We will report this man to the police!

KARA is reporting a man for the indiscriminate, illegal capturing and slaughtering of stray dogs and cats as well as wild animals.

A short time ago, KARA received a sickening tip. While drinking a cup of tea at a café in Yongin, the informant witnessed a man slaughtering a dog. In shock, the informant contacted KARA for help and from that day until now, KARA has been working tirelessly in order to secure evidence by investigating and questioning people around his home and his workplace at a golf course.

Today, Jan 2, 2014, an elk was spotted in a cage at his house. Trying to save this elk from imminent slaughter, KARA reported this man to the police and to this very moment, we have been trying to locate the elk. 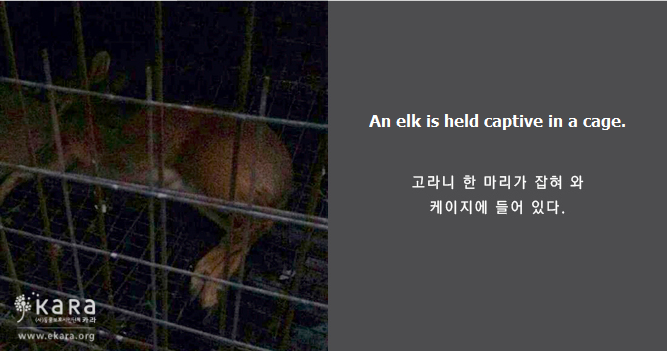 Since there is also a tip-off about some of these illegal captures taking place at the golf course where this man works, the investigation should also ascertain whether the golf course owner and his associates willfully neglected to report this or whether they also took part in these acts.

The judicial authorities must thoroughly and properly investigate for how long this has been going on and how many animals this man has brutally slaughtered, causing terror and suffering. All possible provisions in the law should be applied and this man should be severely punished. 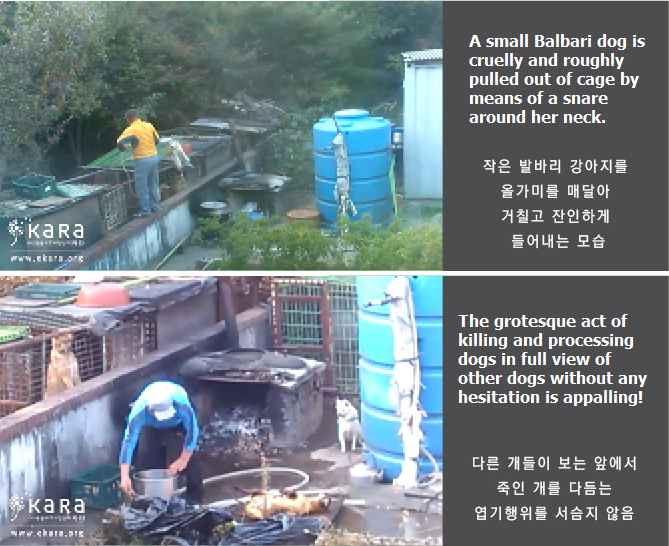 We will do our best to stop this man from continuing to perpetrate these despicable acts.

In addition, we will spread awareness to everyone that wild animals and stray or abandoned animals are all protected by our Animal Protection Act and the wild animal protection and management related laws. Anyone who kills, illegally captures or commits a cruelty to these poor animals, will be severely punished. 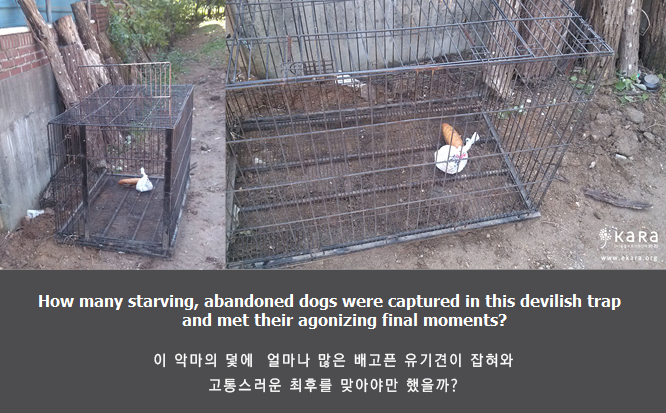 Slaughter and burning of an illegally captured, stray dog

“While this man is cleaning his trap, the seemingly “dead” dog’s head drops to the ground. It could not be confirmed whether the dog was in a comatose state or dead. A white dog, tied up right next to where the man is processing the “dead” dog, is witnessing all of this and barking nervously. From the other side the fence another dog in a cage is also watching.”

“This man drags the dogs out of a cage by means of snares around their necks and kills them by hanging. A medium-sized Balbari dog and a white Jindo dog (it could also be a Samoyed) are struggling to stay alive while in absolute agony! We can also see a kettle used to boil dogs killed in this way. All of this in full view and hearing distance of the other dogs in the cages!”

Illegal capturing and killing by gunshot of a stray cat

“The man brings out a gun to kill a frightened cat. As he pulls the trigger, the cat jerks with pain and shock. The gun shot does not kill the cat and the cat tries to escape. The man brings the gun out again and shoots the cat for the second time.”