Home / Blog / 64 members of the National Assembly from both the ruling party and the opposition parties co-sponsored amendment to the Animal Protection Law proposed.

64 members of the National Assembly from both the ruling party and the opposition parties co-sponsored amendment to the Animal Protection Law proposed.

posted by KoreanDogs.org team on December 8,2016 in News

On September 2, Daily Vet, a professional newspaper for the Veterinarian community in Korea reported on the new proposed amendment to the Animal Protection Act. Below is their report translated. This bill does not propose banning the dog and cat meat trade. That’s because a bill that specifically bans dog meat consumption would not be passed. However, if this bill passes, it would make it much more difficult for the dog and cat meat industry to operate. There have been 14 bills amending the Animal Protection Act introduced just this year in the 20th National Assembly. However, so far, none have even been debated on the floor let alone being passed. So it will be an uphill battle to get this bill passed. We will need a lot of continued campaigning and protesting to exert pressure on the Korean government that doesn’t want to change.

Pyo Changwon represented the co-sponsors to propose the bill… Prohibits surgery of animals by anyone except for veterinarians. 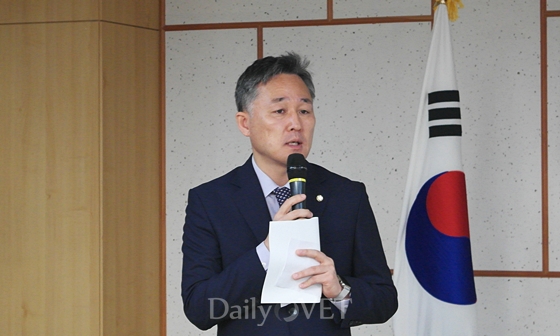 An amendment to the Animal Protection Act was initiated by 64 members of the National Assembly on 31 August. Since the law requires 10 lawmakers to propose a bill, it is common for a bill to be co-sponsored by 10 to 15 members. However, it is extraordinary that 64 lawmakers co-sponsored this bill.

In addition, led by a large number of high-ranking politicians of the three opposition parties; such as Minjoo Party Chairman Choo Mi-Ae, Justice Party Chairman Sim Sang-Jeong, People’s Party Interim Chief Park Ji-Won, Park Young-Sun, Lee Jong-Gyeol former representatives of the party, Lee Seok-Hyun former Vice Speaker of the National Assembly have participated in this bill. This demonstrates that there is a high interest around animal protection and welfare in the National Assembly.

The lawmakers who initiated the bill pointed out the problem with the current law by stating, “The current law is drafted in manner that urges compliance based on the most basic principles of animal care, proper breeding and management and therefore they are ineffective in regulatory power. Because only dogs older than three months of age raised for the purpose of companion animals are required to be registered, dogs in companion animal breeding, sale, import industry are not being managed in accordance with the intent of ‘protection of animals, prevention of loss and abandonment’. Moreover, what constitutes a prohibited animal cruelty act is too ambiguous and lacks definition and definitive interpretation on what does and does not properly constitute animal cruelty.”

In addition they stated, “there is no system that makes an exception to the rules on infringement of ownership for the act of rescuing animal victim of cruelty (emergency measure of taking the animal from their owner), an injustice counterproductive to the legal sentiment can occur where the rescue of abused animal(larceny) may be subject to higher penalties than the act of cruelty to the animal (animal cruelty). In view of the current size of our economy as well as our income level, financial penalties are too low compared to the illegal nature of the offence and therefore, it is wholly ineffective in reaching the objective in criminal policy.”

To order to improve this, the following items were included in the bill. It is a drastic amendment that revises the objective of the law.

▲ The purpose of this law is to be amended as ‘We have the responsibility to protect and manage nature and therefore we must progress to become a society that respect lives where animals and humans coexist through animal welfare. (Article 1).

▲ Expand the ‘animal registration requirement’ to ‘dogs and cats’ of ‘2 months old or older’, that are being bred and managed for the purpose of ‘companion animals breeding, sales and import businesses’ (Article 2).

▲ An act of animal cruelty is to be categorized and defined as animal killing, injury to animal, animal abandonment, and animal cruelty in addition to the below acts as objective elements of crime of killing an animal: ‘Brutally killing animals by burning or beating’, ‘burying alive in the ground’ ‘act of making animals suffer by leaving them in extreme heat or cold and causing their death’. Below were added as objective elements of injury to an animal: ‘An injury to an animal for the purpose of animal production or competition”, ‘strangling, hanging or dropping an animal from a high place’, ‘act of tying animals on to a car or motorbike and dragging’, ‘not providing food or water to animals or neglecting them in a painful environment such as extreme heat or cold’, ‘force feeding food and water or causing pain by providing food or materials that can cause injury’, ‘putting animals in confined spaces where activity is severely restricted’, ‘the act of training animals in a way that causes physical/psychological pain’, ‘force aggression or training animals to fight against each other’, or “bringing animals into contact with people and exhibiting them by moving animals from place to place such as a mobile zoo’. Below were added as objective elements of animal cruelty: ‘using the animal for gambling, providing them as award or prize’, ‘lending the animal’, ‘selling of dogs and cats that are younger than 2 months old that are not able to feed themselves’, ‘selling animals on the street’.(Article 8).

▲ It only allows the direct delivery of companion animals when they are sold, and prohibits the delivery by courier services or quick service. (Article 9-2).

▲ It prohibits the breeding, sale and import dealers from conducting self taught medical examination/treatment to all dogs and cats that are being bred and managed by them. (Article 11).

▲ If there is no time to wait for the law enforcement to arrive for the animal being abused by the owner, it makes it possible for anyone to rescue the animal from the abuser and arrange for emergency isolation. And in order to prevent punishment due to the act of emergency isolation of an animal, provision is added to make exception to the potential breach of infringement of property. (Article 14-2).

▲ Officials of local governments, staff of animal protection center, investigative agencies, police who have received a report of animal cruelty must respond without delay to the site of animal cruelty. (Article 16.2).

▲ If a representative or employee of a business entity abuses or abandons an animal, in addition to penalizing the perpetrator, the business entity will be fined as well. (Article 47)

▲ Animals owned by the person convicted and sentenced for animal cruelty or abandonment will be confiscated. (Article 48).

Regarding the prohibition of unqualified self animal treatment, dogs, cats or animals raised as companion animals (as well as dogs and cats, animals that are prescribed by the Ministry of Agriculture, Food and Rural Affairs), animals that are bred and managed for the business purposes by an animal breeder, sale, import businesses shall not perform surgery of any kind (Surgery can only be perform by veterinarian) (See table).

Unlike the amendment bill to animal protection law proposed a day earlier(Han Jeong-Ae as representative) that prohibits “self examination and surgery” by anyone who is not a veterinarian, this bill prohibits only the surgical operation.

* Bill proposed by Han Jeong-Ae: Examination and surgery to animals cannot be performed by anyone other than veterinarian under the “Veterinary Law”. However, this does not apply to surgeries such as castration, removal of horns, and tail docking for animals subject to permission or registration of livestock breeding business under the Livestock Act or animals prescribed by the Ministry of Ministry of Agriculture, Food and Rural Affairs.

In addition, a person who has been convicted and sentenced for imprisonment or fined for violation of Article 8 through Article 11 of the Animal Protection Act shall be punished by not allowed to work in the profession listed below for 3-5 years from the date of execution or sentencing. These people are also not allowed to own animals for 3-5 years.(see table below).

Article 49. (Restriction to owning animal by animal abuser)
Section. (1) Person who violated Animal Protection Act (APA) Articles 8 to 11 and sentenced to imprisonment cannot own animals for 5 years from the completion of sentence or receiving immunity.

Section. (2) Person who violated Animal Protection Act (APA) Articles 8 to 11 and sentenced to imprisonment cannot work in a profession listed below for 5 years from the completion of sentence or receiving immunity.

1. Veterinarian
2. Veterinary technician, employee, or working at animal hospital
3. Zookeeper at zoo, employee or working at zoo
4. Trainer/tamer or animal training profession
5. Breeding of animals for testing and related job
6. Animal testing, employee at animal testing organization that has access to the animals.
7. Animal transportation and related job
8. Animal slaughter and related job
9. Animal funeral and cremation, animal sale, animal breeding, animal import business
10. In addition, jobs that relate to farm animals and dealing with animals that are prescribed by the Ministry of Agriculture, Food and Rural Affairs.

Section. (3) Person who has violated Animal Protection Act (APA) Article 8 to 11 and is sentenced to imprisonment style probation or monetary fine cannot go on to own animals for 3 years from the date of sentencing.

Section. (4) Person who violated Animal Protection Act (APA) Articles 8 to 11 and sentenced to imprisonment style probation or monetary fine cannot work in the field listed in section 2 of this article for 3 years from the date of sentencing.

Section. (5) The detail scope of profession that is listed in section 2 will be prescribed by the Ministry of Agriculture, Food and Rural Affairs.

Pyo Changwon who introduced this bill as the representative emphasized that “It is an enactment(legislation) level of amendment and it is meaningful that 64 lawmakers of the ruling and opposition parties jointly initiated,” and added, “A respect for life is not just for animals but shall benefit human beings.”