"I am in favor of animal rights as well as human rights. That is the way of a whole human being." ~Abraham Lincoln

I am extremely upset about the torture and consumption of companion animals in South Korea.
With the ubiquity of social medias, every day we are seeing shocking and heartbreaking images and videos of innocent dogs being tortured and killed in your country.

Even though Korea has established an Animal Protection Law for companion animals, dogs are still beaten, hung, electrocuted, and treated brutally by farmers and slaughters. Also, dogs and cats are still being beaten and boiled alive for so-called elixirs, which do not have medical properties except in the minds of ignorant and gullible customers.

These practices have no place in the modern world. Other Asian countries have banned the eating of dog meat and the cruel industry that goes with it, such as Taiwan and the Philippines. Why does Korea persist in lagging behind these countries and other civilized societies?

It’s the responsibility of the Korean government to once and for all end the cruel dog meat and cat medicine industries in Korea. It is time to dismiss the childish myths and propaganda surrounding these industries and their vile products. It is time to leave behind backward and unnecessary traditions.

And it is time for Korea to start taking animal welfare seriously and show that it really does have a compassionate and ethical society. That means it is time for the Korean government to start better educating the public about the importance of spaying and neutering, about not abandoning pets, and about treating animals in a proper manner.

Until these things are done, Korea’s reputation in the international community will continue to suffer. Its citizens will continue to face shame and embarrassment. And Korea will continue to be regarded as “third world,” despite its modernization and attempts at globalized thinking.

I would ask that you do all in your power to stop this barbarism and cruelty immediately.

From now on, I will boycott Korean products, and I will not support Korean companies or visit Korea until the abuse of cats and dogs has finally ended. 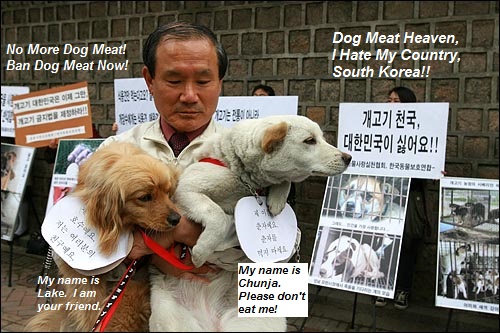 For the Americans Only: Sample Protest Letter to the South Korean Government

As an American citizen, I am angry and appalled over the torture and consumption of companion animals in South Korea. Every day on social media we are hearing of horrific abuse and seeing shocking images and videos of innocent dogs being tortured and killed in your country. (for example see: https://youtu.be/cCdTceduKcY )

Even though Korea has an Animal Protection Law for companion animals, it is meaningless as the Korean government does not enforce it. As a consequence dogs are still beaten, hung, electrocuted, and brutally treated by farmers and slaughterers. In addition, both dogs and cats are still being boiled alive for so-called elixirs having no medical properties except in the minds of gullible customers.

These practices have no place in the modern world. Yet, all this goes on in the open and the Korean government does nothing to stop it. Why? Other Asian countries have banned the eating of dog meat and the cruel industry that promotes it. Why not Korea?

It is the responsibility of the Korean government to end the abhorrently cruel dog meat and cat medicine industries in Korea and start taking animal welfare seriously. This means educating its citizens about the importance of spaying and neutering, about not abandoning pets, and about treating animals humanely. Until these things are done Korea’s reputation in the international community will deservedly suffer.

I urge you and the people of Korea to hearken to the wisdom of Mahatma Gandhi who said: “The greatness of a nation and its moral progress can be judged by the way its animals are treated.”

Americans love their companion animals, dogs and cats alike. But it is not only for that reason we feel a special obligation to speak out on this issue. It is also that we remember well our many loved ones whose lives were sacrificed in your country insuring your freedom, and are mindful of the considerable treasure our country continues to spend for that same purpose. We can only pray that so much sacrifice has been worth the cost.

Until the illegal dog meat and cat medicine industries have been finally abolished in Korea, I will boycott all Korean products and companies. I also intend to urge everyone I know to urge everyone they know, etc. to do the same. In addition I will unceasingly lobby our own government to do whatever is within its power to persuade Korea to join the civilized nations of the world with respect to its treatment of companion animals.

Thank you for your time. The favor of your reply is requested.

“As an animal lover, and part of a high-profile animal rights group, which has supporters across the globe, I wish to register my deep concern about the unregulated, cruel and abusive dog and cat meat trades with your country, South Korea.

I sincerely ask that your government immediately begins policing and enforcing your animal protection laws; and until it brings about a permanent end to both the dog and cat meat trades, I will boycott all forms of tourism, all products, and all services from South Korea; and I will urge others to do the same.”

Two and a half million South Korean dogs are electrocuted, hanged, or beaten to death each year. They are killed in the cruelest ways imaginable, because many South Koreans believe the insidious myth that the more an animal suffers, the tastier the meat and that the medical properties will be enhanced. Thousands of cats are also slaughtered for soups and so-called “health” tonics. They are thrown into boiling water while still alive.

The practice of eating dogs is not widely accepted in South Korea. It gained popularity after the South Korean War. The practice continues to thrive with the aid of greedy restaurateurs, meat dealers, and butchers.

Over the last decade, many in South Korea have embraced the notion of dogs and cats as animal companions. But we must take action to persuade the South Korean government to legalize a ban on dog and cat meat and forever stop this technically illegal, corrupt, and sordid industry.

It is appalling that dogs and cats should be kept in filthy crates, forced to watch their cage mates being tortured and slaughtered. Eyewitnesses have reported dogs being literally torn apart while still alive, their tormentors saying that the more prolonged the torment of death, the better the taste. This attitude toward any living being is at best unforgivable. 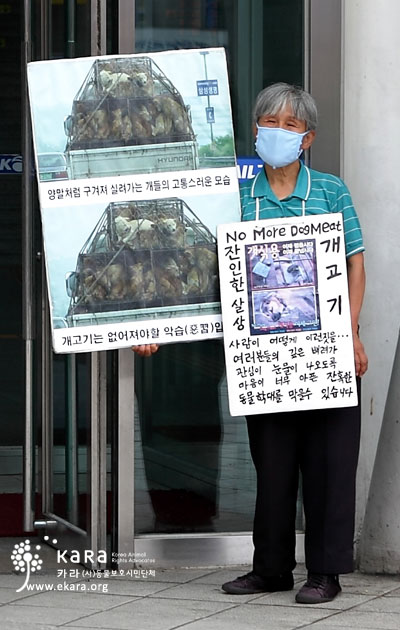