posted by KoreanDogs.org team on April 25,2016 in Campaign, Event 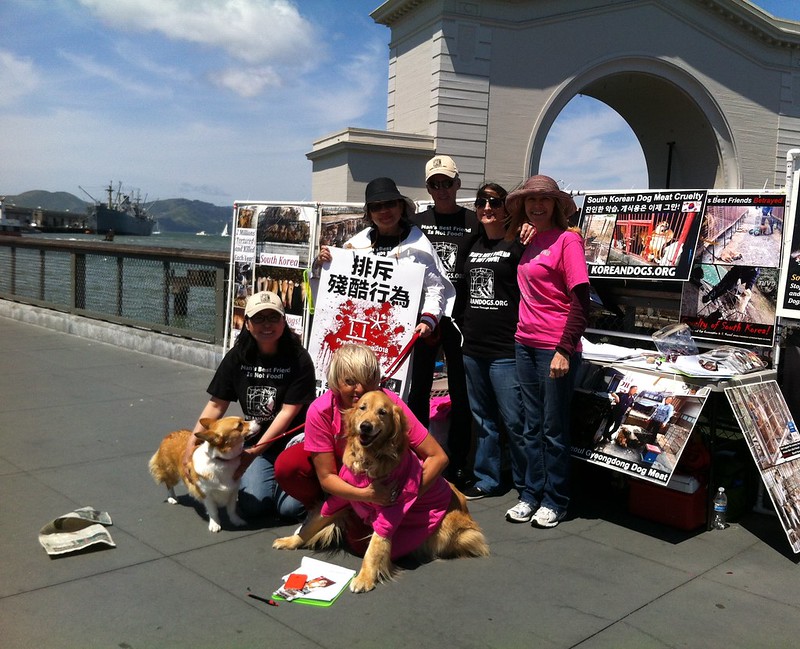 A big thank you goes out to the volunteers who came out yesterday to give a voice to the Korean dogs!!! Your compassion and dedication is truly appreciated. Kit and Nikku (the Corgi), Tracey, Don, Daniela and Orso (the Golden Retriever), Krissy, Natasha and Giny worked hard to advocate for the Korean dogs. It is especially nice to have our canine volunteers helping us today; Orso is a veteran animal rights activist and Nikku was a first-timer, but they did a wonderful job of charming the crowd and so helped in getting signatures for our petitions. Krissy and her family drove all the way from Roseville, California, to join us today, which is over a 2 hour drive each way. We collected 883 signatures and handed out over 1000 leaflets. We also received $5 in donation, which we will donate to Nami Kim and her team in South Korea. It was another great day at the famous San Francisco Fisherman’s Wharf, with lots of tourists and visitors from all around the world; many of these were from South Korea. One Korean tourist, in his 60s, who was traveling with his wife, said that he has a lot of friends who eat dogs regularly, so he took a photo with Giny telling us that he will show the photo to his friends in Korea, and tell them about how hard we are working to try to end the dog meat trade there. We also met a group of Change.org employees who happened to be walking by (and one of them was Giny’s former co-worker at another company) and we shared how much we love change.org for providing us a free platform for our campaign. They were happy to hear that, of course, and told us that they will relay our message to their management.

Everyone can do something to bring change. What will you do today?
Click HERE to take action! 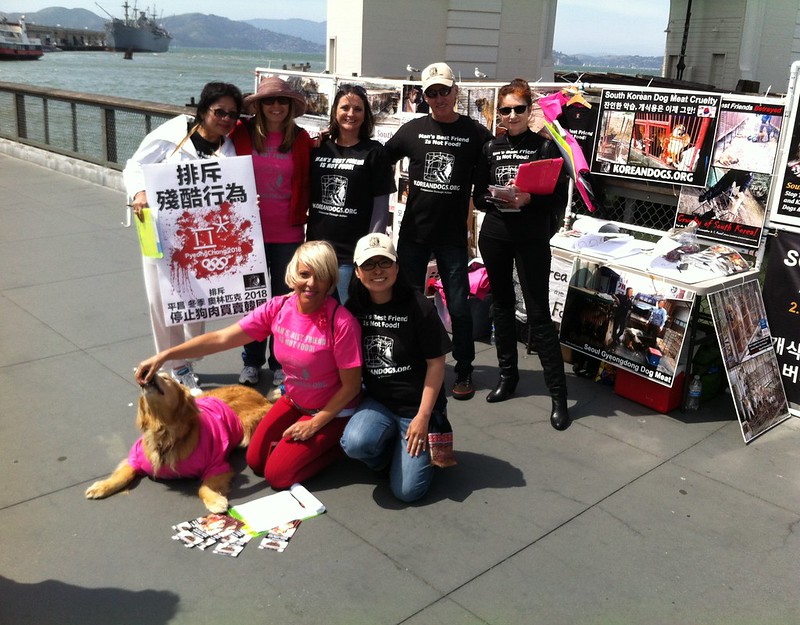 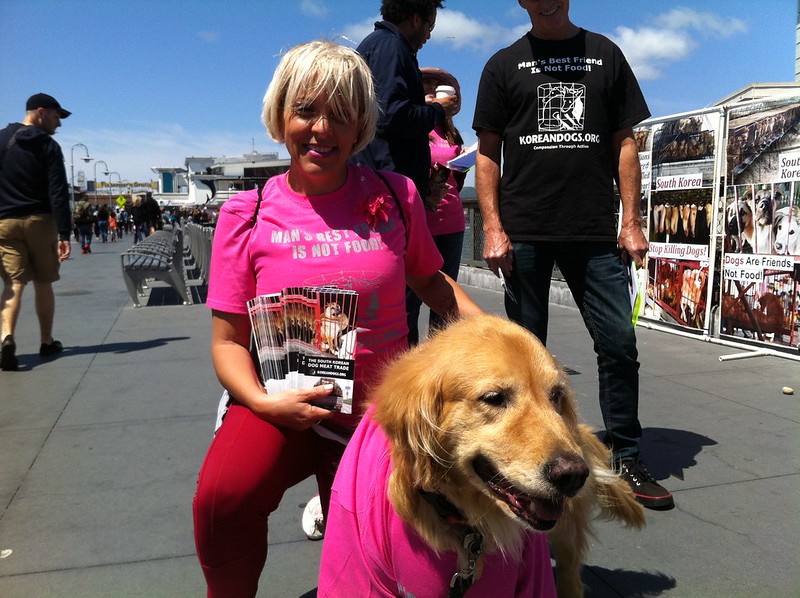 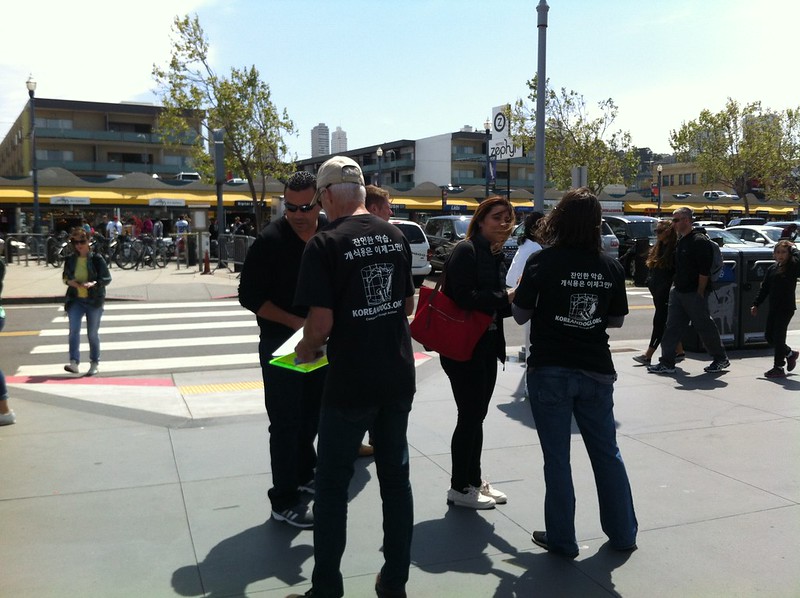 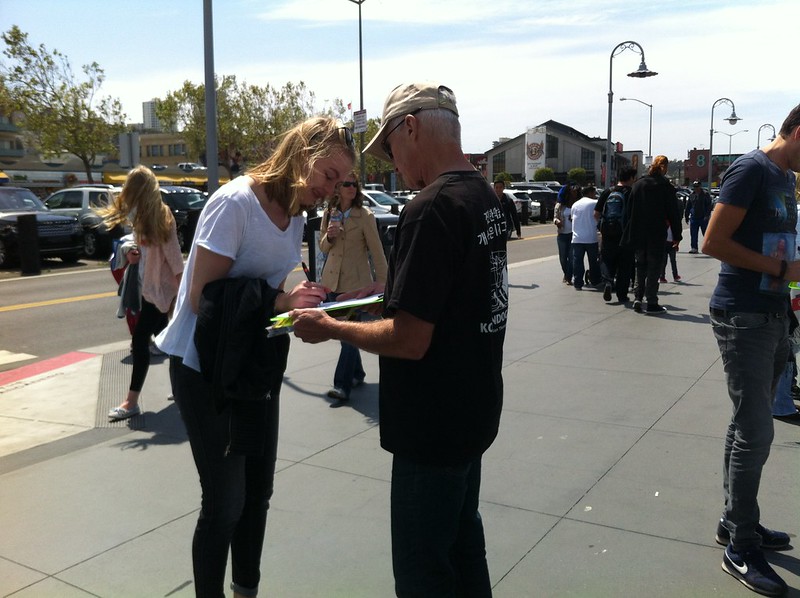 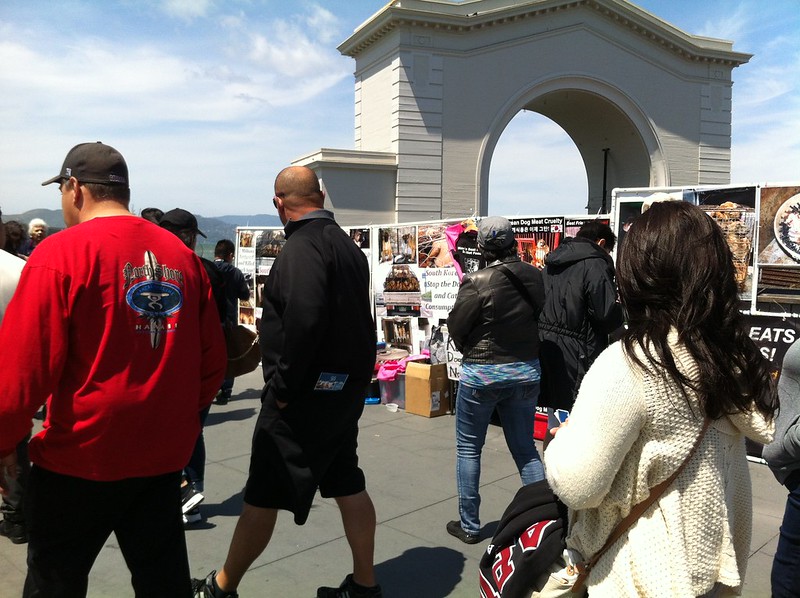 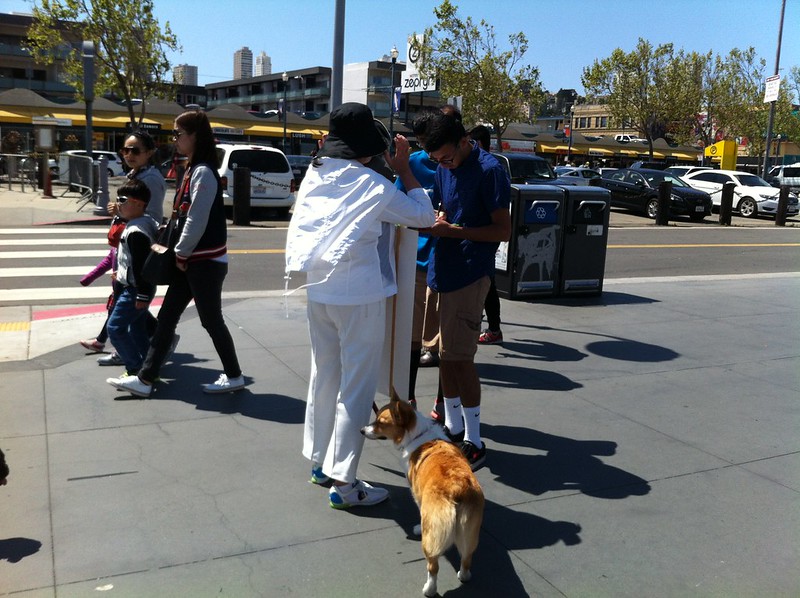 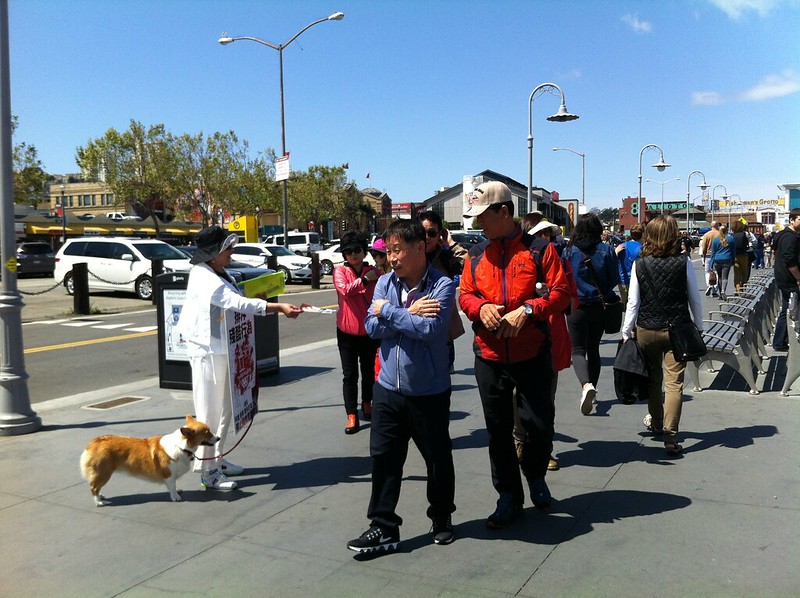 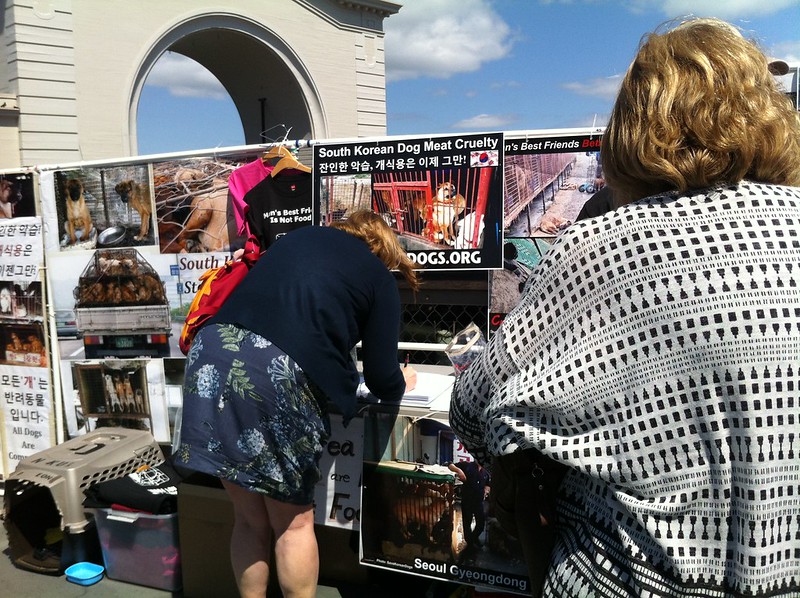 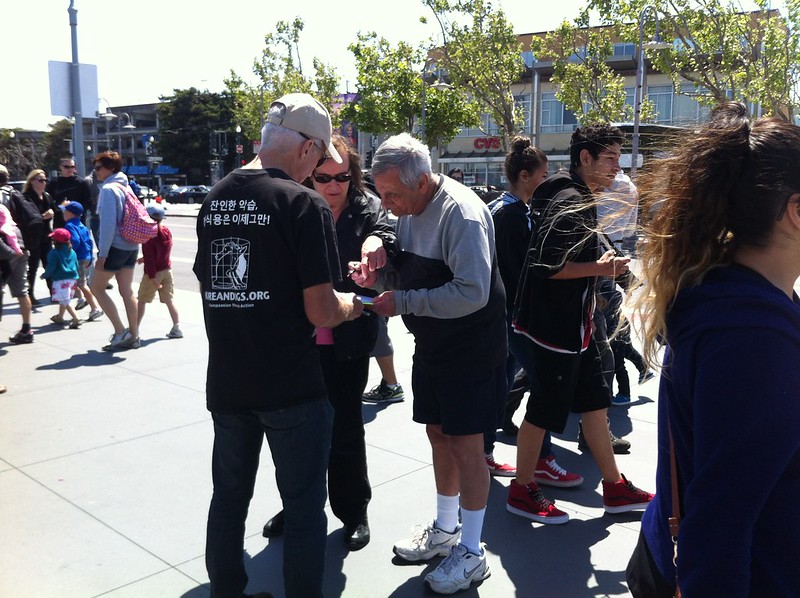 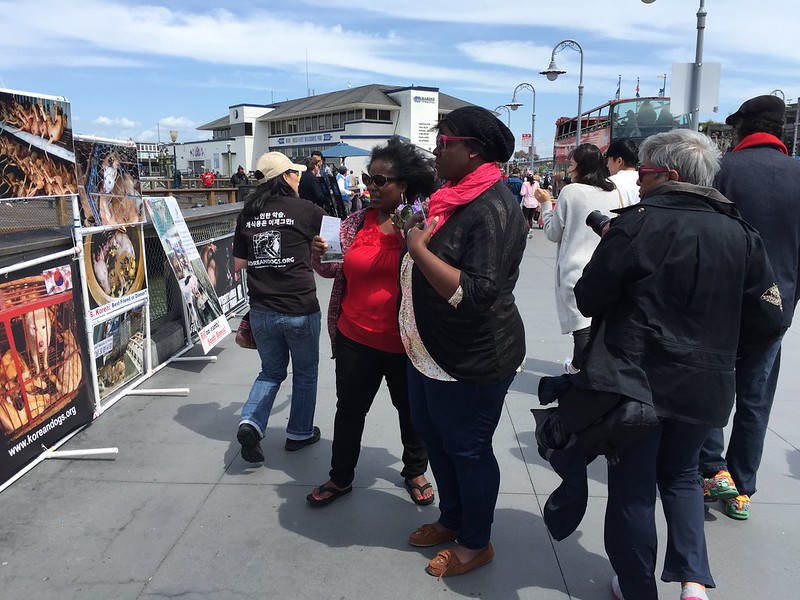 Copies of all 376 pages (over 7,000 signatures) of the petition signatures which we had collected since we began collecting signatures at the San Francisco Fisherman’s Wharf events on February 16, 2014, were sent to the petition targets noted below, on May 11, 2016 via the U.S. Postal Service Global Priority Mail.

Petition signatures from our Fisherman’s Wharf event on March 27, 2016 were already mailed to the Korean President Geun-Hye Park and Korean Ambassador to the United States Ho-Young Ahn on March 29, 2016 in the same package for the petition: Drop defamation charges against Nami Kim who rescued puppies from a dog hanging restaurant. 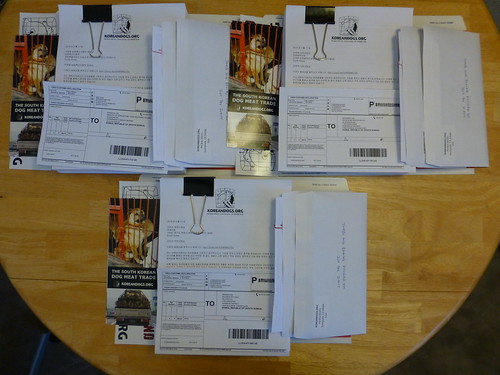 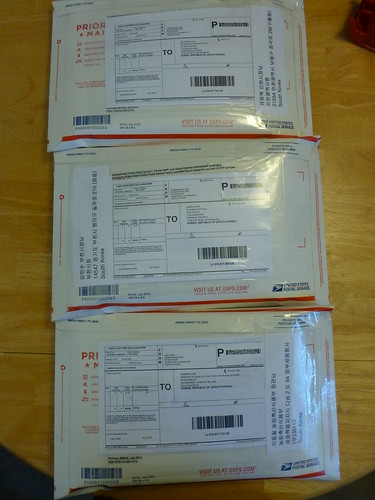