Home / Blog / Bucheon: a new light shines in the darkness.

Bucheon: a new light shines in the darkness.

posted by KoreanDogs.org team on May 25,2016 in Nami Kim Team

Bucheon City has a mayor to be proud of! Mayor Man-Soo Kim is actively working towards ending dog meat consumption in his City.

In addition to responding to the approach made by Mayor Harvey Hall, from their Sister City, Bakersfield, who contacted Bucheon – as a direct result of the pressure from our Sister City Campaign – Nami Kim has been talking to, and working together with, various city officials.

This is a very important step, as not only are those in charge willing to hear what Nami is saying to them about this ‘unacceptable’ trade, but the city has taken positive steps: passing new animal protection laws, and sending representatives from their offices, and the animal welfare department, out with Nami and her team, to support and coordinate rescue.

These are early days, and it is, of course, an uphill climb; but if Bucheon can become an entirely “Dog Meat Free Zone”, this would be a fantastic example to set for all other cities in Korea.

We really commend Bucheon on their action, and we applaud all of those within the city offices and other departments who were involved in this positive and inspiring action.

5/19/16 I need to say a word about the sister city campaign and how extremely important it is.

I learned at the meeting with the city of Bucheon yesterday that its sister city Bakersfield’s mayor, Mr. Harvey Hall, did write to the mayor of the city of Bucheon, Mr. Kim, to do something about the dog meat trade in the city. The city of Bucheon does feel shameful about this practice. Koreandogs.org always makes sure the signatures are printed out and sent for all petitions. We have had four victories so far. Let’s keep the momentum going in order to achieve even more victories!

My desire continues for the city to get involved with relocating some of the dogs from the 300 dogs dog farm. The most we can take at our shelter is 100. What then will happen to the other 200 dogs? The city has no budget for such matters. They don’t even have space for two dogs at the city’s animal shelter.

5/18/16 We all got together to make one voice; the Bucheon city council, the city’s animal welfare department, and our rescue members.

The person to the very left is Mr. Kim without his mask. Now the enforcement of the animal law bill has passed but we still have more work to do. We took our first step with hands in hands. 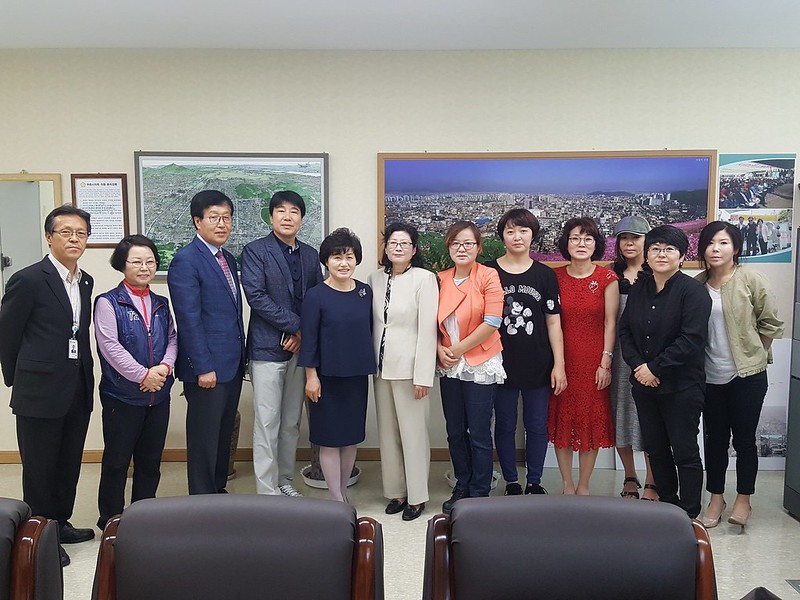 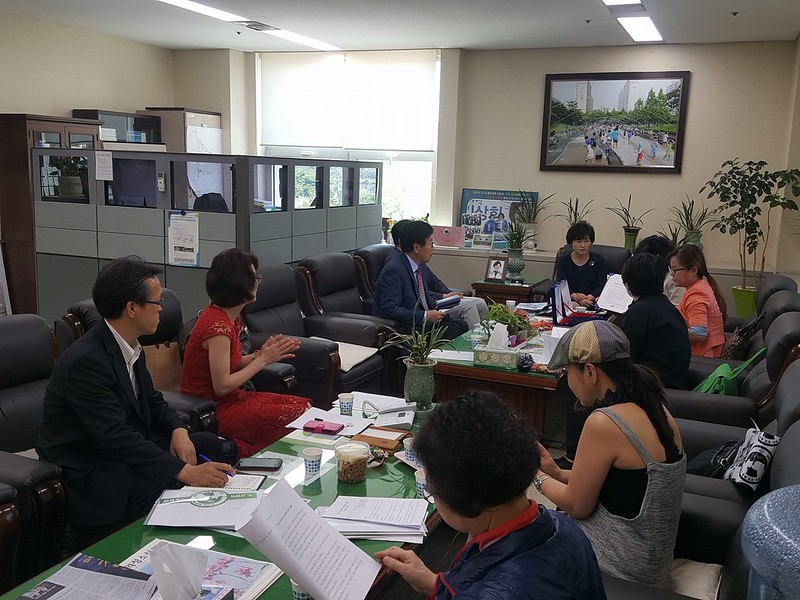 5/18/16 The city councilwoman, Ms. Dong-Hee Kim, is the one who helped get the animal enforcement law bill passed two weeks ago. Today we presented her with a token of appreciation.

This was made in both English and Korean presented by the START Rescue and 92 rescue groups and animal organizations in California.

I urged the city to be the example by becoming a “Dog Meat Free Zone” so that other cities can follow their lead. That will be the next step. 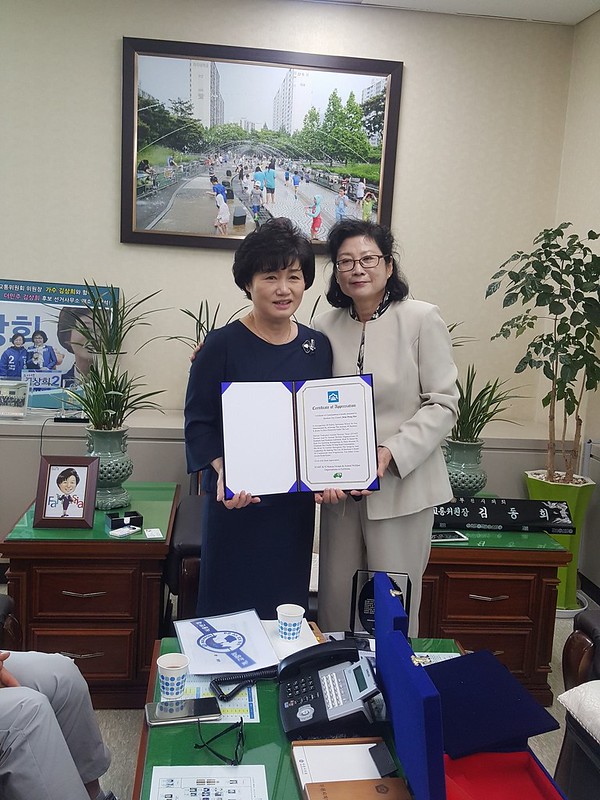 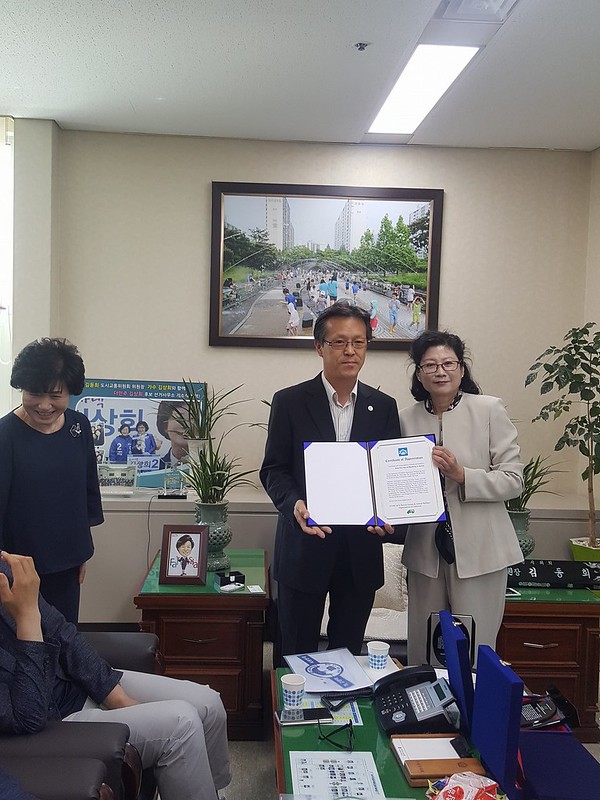 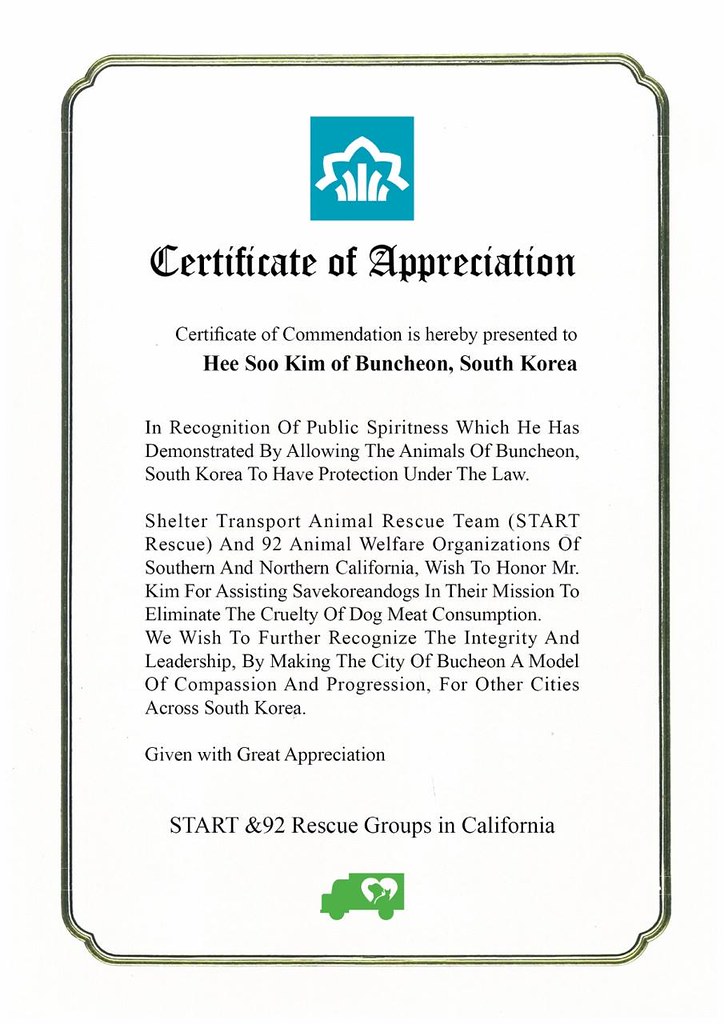