Home / Blog / [Call for Action] Severe punishment for the criminals who murdered dogs with deadly pesticides.

[Call for Action] Severe punishment for the criminals who murdered dogs with deadly pesticides.

posted by KoreanDogs.org team on March 7,2019 in Action Alert, Campaign 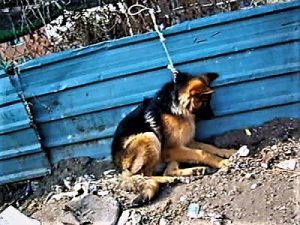 This truly horrible and criminal act cannot go without further investigation and direct action! Please help us to draw attention to this case by taking actions.

Below is translation of the petition by the Korean organizations: Korea Animal Welfare Association, Busan Alliance for the Prevention of Cruelty to Animals (Busan KAPCA), Busan Citizen Alliance.


We call for a thorough investigation and for the severe punishment
for the criminals who murdered dogs with deadly pesticides.

Early morning last March 1, Busan Gangseo District police arrested two suspects accused of using food coated with deadly methomyl pesticide in order to lure and then murder large dogs in order to sell their dead bodies. The police have requested an arrest warrant for one of these two suspects for various crimes including animal protection law violation and grand larceny.

The police have found at least 6 cases in which these suspects have targeted large dogs, especially Jindo and Sapsal breeds, tied up in people’s yards. The suspects would toss meat coated with deadly methomyl pesticide to these dogs, and then, when the dogs consumed the meat and collapsed, the suspects would load the dogs into their car and flee. Methomyl is a pesticide used to exterminate moths and other insects, it is so deadly that its mere storage, display and distribution can be subject to up to 3 years imprisonment or a 30,000,000 KRW fine by the Agricultural Pesticide Control Act. Many cases of animal poisoning in the 2000s including the cases of poisoned yogurt placed on a park bench in Daegu in 2004, Gyeongbuk Yeongcheon marketplace in 2007, Jeonnam Wando in 2008, Jeonnam Yeonggwang, Jeonnam Gwangyang in 2011, Jeonnam Hampyeong in 2012, Gyeongnam Changwon, Chungbuk Boeun in 2013, cider incident in Sangju in 2015 all used methomyl.

These suspects, who purchased such deadly pesticide to murder these dogs and to sell their bodies to an unidentified person were found to have made a profit of about 2,000,000 KRW. The police have not yet been able to identify to whom these dog bodies have been sold and how these bodies are being used.

We are appalled that dogs murdered with deadly poison could have been sold to an unidentified person. The fact that the suspects targeted mostly large dogs, and that the dead bodies were sold to someone else highly suggests that the bodies were used for dog meat.

If our concern that these dead dog bodies were distributed as dog meat is indeed true, this proves that the claim by the dog meat trade that the dogs used for dog meat and companion dogs (pets) are completely separate is false. It also shows just how dangerous the consumption of dog meat is, as also argued by the 2017 report by the Korea Animal Welfare Association in which the overuse of antibiotics were found in dog meat. We must not forget the many dogs that must have died in much pain when they were brutally murdered for their meat and must call for the action to ban the dog meat trade.

Accordingly, we request of the investigating authority and court the following:

1. A more aggressive and thorough investigation to identify how the bodies of the dogs killed with deadly pesticide were distributed.

2. A severe punishment for these criminals who brutally murdered animals and sold the bodies for profit. 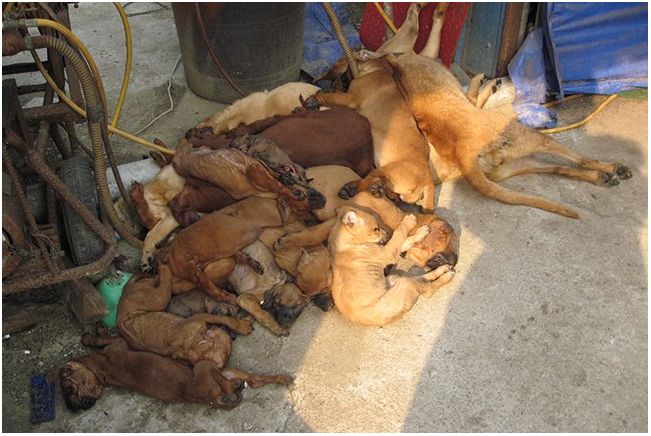 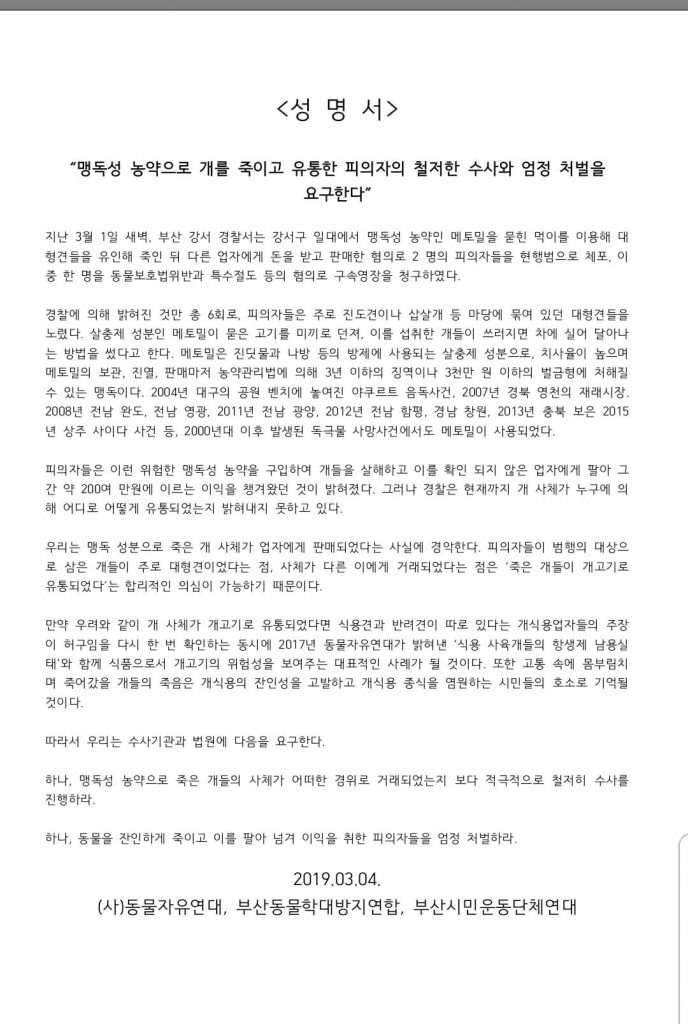