Home / Blog / Shocking story behind the case of an adopted cat and a companion cat both of whom ended up as soup at the hands of a trusted adopter.

Shocking story behind the case of an adopted cat and a companion cat both of whom ended up as soup at the hands of a trusted adopter.

This is a translation of Korean news, Ilyosisa, reported on April 1, 2015: Shocking story behind the case of an adopted cat and a companion cat both of whom ended up as soup at the hands of a trusted adopter. <충격> 입양한 고양이 잡아먹은 사연. 믿고 보넸는데 탕으로 ‘후루룩’

Shocking story behind the case of an adopted cat and a companion cat both of whom ended up as soup at the hands of a trusted adopter.

A disturbing case took place where a woman adopted a cat whom she transported along with another cat she had kept for 7 years to her parents who slaughtered and ate both of the cats. This case is shocking to the people who have companion animals, and a petition campaign for a thorough investigation of this case is currently in progress. We have traced the details of this case. 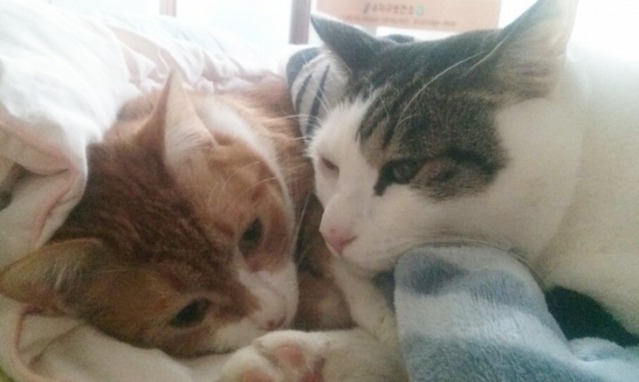 In January of 2013, a stray cat ‘Jeannie’ suffered from a broken leg due to being beaten by an unknown assailant. Ms. A, who regularly feeds the stray cats, found Jeannie with her leg hanging tattered and rushed her to the vet who performed surgery on her leg. The surgery was successful, but Jeannie required metal pins in her leg. Ms. A along with a foster mom devoted their time to take care of Jeannie every day for almost a year even providing rehabilitation treatment for Jeannie.

Misplaced trust of a cat lover

In December of 2013, Ms. A was introduced to Ms. B whom she got to know in her volunteer group. Ms. B had claimed to be a cat lover who had been raising a cat named Konggi for the past 5 years. Ms. B expressed her wish to adopt Jeannie in order to provide a companion to Konggi since her cat usually spent long hours at home all alone due to Ms. B’s work schedule. Ms. A believed that Ms. B truly loved cats and sent Jeannie to Ms. B.

Ms. A had meticulously taken care of Jeannie until she was adopted and even executed an adoption agreement for her. Since the adoption, Ms. A had seen photos of Jeannie on Ms. B’s Kakaotalk (popular Korean Social Media) page and believed that Jeannie was doing well.

On March 19th of this year, Ms. A heard that Ms. B was getting married and that Jeannie and Konggi had been sent to Ms. B’s parents’ home. Ms. A notified Ms. B that sending an adopted cat to another person was a violation of the adoption agreement and told her that she would take Jeannie back. However, Ms. B repeatedly told Ms. A that “the cats are doing well at my parents’ place”. Then Ms. B changed her story and said “the cats are not at my parents’ place.” and that “We are looking for the cats” before abruptly hanging up the phone.

Ms. A became suspicious, so she went to Ms. B’s store to talk to her. Ms. A asked for Ms. B’s parents’ address, but Ms. B refused to tell her their address and kept telling her that she was busy and would tell her later. Ms. A had to wait for 6 hours before Ms. B finally agreed to give out her parents’ address. Ms. A left at 8pm that night to go to Ms. B’s parents’ place in Yeongju, Gyeongsangbukdo Province.

Slaughtered like a chicken and eaten for health benefits

Ms. B’s mother, Ms. C, initially refused to meet with Ms. A. However, Ms. A was finally able to meet with Ms. C after telling her that she would “sue her for the violation of the adoption agreement”. Ms. C kept repeating for over an hour that the cats were not at her home before finally confessing to slaughtering and eating both cats. 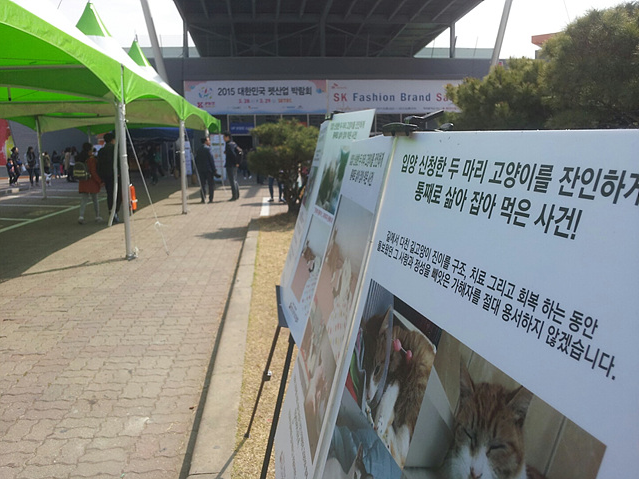 Ms. A could not believe what she was hearing and asked Ms. C if she had seen the metal pins in order to verify that one of the cats she had eaten was, in fact, Jeannie. Ms. C said she had seen the metal pins from the cat’s leg. Ms. C followed by saying that she “ate the cat not knowing that the cat had a story” and repeatedly told Ms. A that “the cats are already dead, so please forget about them”.

Ms. A said that she was more upset with Ms. B’s nonchalant attitude than with Ms. B’s parents for slaughtering and eating the cats. Ms. A said “despite the fact that her parents slaughtered and ate the cat whom she had raised for almost 7 years as well as an adopted cat, she doesn’t seem remorseful at all”. We have tried to contact Ms. B many times in order to hear her side of the story but could not get in touch.

Violation of the adoption agreement

Ms. A claimed that Ms. B did not follow the adoption agreement. Ms. A said she is “willing to sue Ms. B for violation of the contract”. If we take a look at the provisions of Ms. B’s violation of contract, the first is Article 1 which states ‘In the case of the adopted cat being lost, the adopter must notify the original guardian. In the case of the adopted cat being abandoned, the adopter is subject to criminal and civil liability’. This is followed by Article 3 which states ‘one must not batter or cause harm to the cat’. Ms. B has clearly violated at least these two provisions, because the cat was not only abandoned and beaten, but killed.

Article 6 states that ‘when the adopter cannot take care of the adopted cat any longer, the adopter cannot send the cat to a shelter or to an individual regardless of the reason. The adopter must send the cat back to the original guardian who sent the cat off for adoption’. Ms. B sent the cat to her parents without informing Ms. A who was the original guardian. Article 7 states that ‘the adoption fee is not refundable in any case’, but Ms. B has not yet even paid the adoption fee of 30,000 Korean Won ($28 USD). Ms. A had decided not to pursue collecting the adoption fee believing that the ‘adopter would use that money to buy some tasty treats for her cats’.

Animal advocates told us that there are several scenarios when it comes to companion animal adoption. They are well cared for, they are sent back because they cannot take care of them, they are abandoned, they are sold or they are abused with battery. In the worst cases, the adopted animals are killed. Astonished animal advocate KimOO said that “this case is unheard of” and “slaughtering and eating an adopted animal is the worst case scenario”. He continued by saying “Our nation’s level of consciousness about animals is still very poor”.
“How can a human being perpetrate such an appalling act?”

Visitors to the Pet Industry Expo had similar reactions. Last March 27th, the Korean Organization for the Protection of Cats organized a petition drive in front of the ‘2015 Korean Pet Industry Exhibition‘ at the Seoul Trade Exhibition & Convention Center (SETEC) to ask for a thorough investigation of this case. 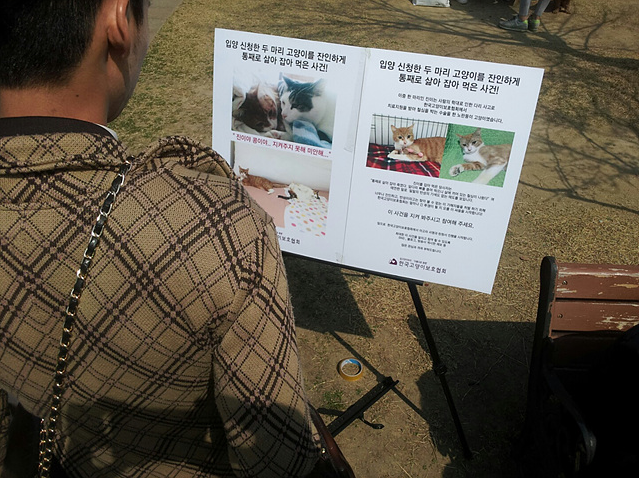 Sun-Mi Park, the director of the Korean Organization for the Protection of Cats, said that her organization “sponsored 20% of the surgery cost for Jeannie who was slaughtered and eaten”. The perpetrator, Ms. B, adopted the cat with the organization’s adoption agreement but Ms. B did not fulfill the agreement.

Director Park continued by saying that “Ms. B has not issued a word of apology and she doesn’t seem remorseful” and added that “Jeannie was rescued and adopted through the efforts of many people who took care of her for a period of one year through rehabilitation treatment and who have cheered at her new chance at life. Only for Jeannie to be brutally killed”. She continued by saying “We desperately need an effective Animal Protection law.”

Director Park claimed that the prosecutors and judges’ level of consciousness about animals is still low. They have the tendency to view the animals not as life but as property. “Some people say that it’s ok to eat them.” She continued. “This is an uphill battle, like trying to break a boulder with an egg, but we will fight to the end. Ms. B’s violation of contract must be fought and our goal is to set a precedent for the Animal Protection law with this case.”

At this moment, an online petition is in progress on Daum Agora Petition (Korea’s online petition). Since this petition began three days ago, over 10,000 people have signed the petition. Their opinion about this case is that “the perpetrator must be punished”.

The current Animal Protection Act states that anyone who commits animal cruelty is punishable by up to one year in prison or a maximum fine of 10 million Korean won ($9,000 USD). However, it is unlikely that Ms. B will receive an actual prison sentence. According to the police, the number of cases involving the violation of Animal Protection Act was 1 in 2002, 50 in 2008 and 113 in 2011, and until now, only 2 cases have been given actual prison sentences of 6 months.

Hee-Kyung Cho, Director of Korean Animal Welfare Association, said “Contract violation isn’t subject to criminal law. However, it is subject to civil law. So far, there has never been a case where someone was punished for killing an adopted animal.“ She also said, “The problem right now is that this case can become a minor animal cruelty case. That’s because there’s no evidence, so if the perpetrators change their story, it’s hard to prove the charge.“ Director Cho continued, “The charge has to be substantiated by establishing indirect evidence such as the fact that Ms. C found the metal pin from the cat and the circumstantial evidence surrounding the case.“ 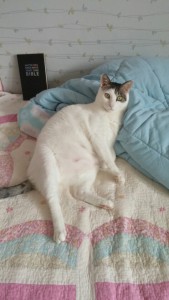 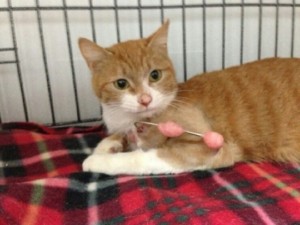