Home / Blog / After arduous preparation for a year, the Amendments to the Animal Protection Act (APA) will be proposed on October 1, 2013!

After arduous preparation for a year, the Amendments to the Animal Protection Act (APA) will be proposed on October 1, 2013!

posted by KoreanDogs.org team on October 10,2013 in Action Alert, News 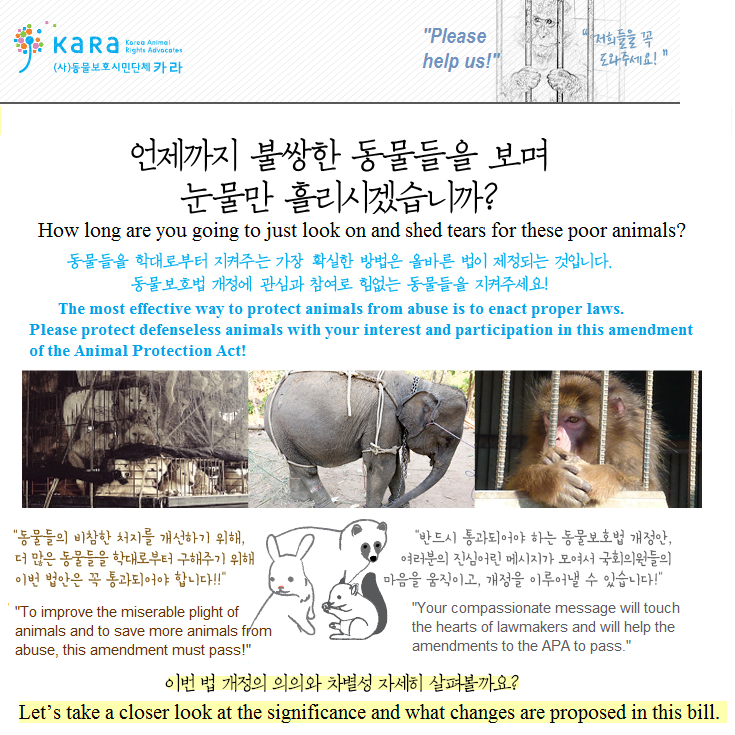 1. The result of a beautiful collaboration! Providing direction for our nation’s APA!

After a year-long preparation, amendments to the APA will be proposed at the National Assembly on September 26, 2013. This proposed amendment is the result of a lot of hard work and sweat from many organizations. The Attorneys’ Network for Animals and Korea Animal Rights Advocates (KARA)conducted APA research meetings. Five sessions of the National Assembly panel discussions co-sponsored by KARA/Green Party/lawmakers and the working level/promotion committee meetings that included experts from various fields were held.

While drafting this amendment with the Attorneys’ Network for Animals as leads, we reviewed the history of the amendments to our APA and also extensively referenced the APA of other countries.

To draft a bill that takes current reality into consideration and provides the necessary protection and welfare regulations, we analyzed recent animal cruelty cases to identify areas of laws that need change, even referencing child welfare acts.

At the last panel discussion meeting in April, a panelist who has been monitoring the history of the enactment and the amendments of APA said, “This is the most beautiful amendment I have ever seen so far. Even if not all the provisions in this bill pass, this bill has a great significance in that it provides a direction for our nation’s APA to move forward.” This encouragement became a big source of strength for us.

2. This amendment to the APA is our nation’s first joint initiative that transcends political parties!

We are deeply grateful to the national assembly members, Jeong-Lim Moon (Saenuri party), Sang-Jeong Sim (Justice Party), Sun-Mi Jin (Democratic Party) and Myung-Sook Han (Democratic Party), who for the first time in our nation’s history have transcended political parties to sponsor this amendment to the APA.

We are also truly appreciative of the many lawmakers who have co-sponsored this bill.

Furthermore, we are indebted to the Green party and their office, speakers and panelists, APA reform committee members and advisers who participated in the five panel discussions. But most of all, we are deeply grateful to the Attorneys’ Network for Animals for their year-long hard work and research, and the great sacrifices they made, even putting their own livelihoods aside to draft this amendment.

As a result of the shared noble common goals and the beautiful cooperation of all, we were able to achieve a remarkable joint initiative that transcended all political lines.

Prior to the completion of our bill starting around the end of last year, several lawmakers proposed partial amendments to the APA and were successful in passing some of the provisions that are similar to what we have been working on. We would like to take this opportunity to thank them as well.

What will change if this bill passes?

All provisions of the bill are important. We will first divide them into ten categories and introduce them here. Let’s take a look at the contents of the amendment.

1. The name of the law will change from ‘Animal Protection Act’ to ‘Animal Welfare Act’!!

The new name ‘Animal Welfare Act’ carries our hope that we will go beyond just protection to provide animals with a better living environment with greater assurance for their right to live. Animal Welfare Act will not only protect animals from abuse, it will also provide a foundation that will allow for more provisions to prevent cruelty to animals by increasing the level of standards of welfare.

2. Human responsibility as a principle: from recommendations to obligations

This law is based on the principle of human responsibility towards animals (Amendment Article 1 Section 1). Accordingly, this bill proposes new mandatory provisions as well as raising the level of existing ones from ‘recommended’ to ‘mandatory’. This bill addresses the animals’ basic needs and the responsibilities of the nation and its local governments to meet their needs.

3. Widen the range of animals protected

More animals will be protected by law! The new bill opens up the possibility to protect not only all vertebrates with a developed nervous system capable of feeling pain, but even the invertebrates. Research study shows that invertebrate animals can also feel pain.

Article 8 of the current APA (Prohibition of cruelty to animals, etc.) becomes significantly strengthened, refined, and departmentalized.
Through these changes, the cruel abuses from which the companion animals, stray cats, and the animals that live around us suffer can be prevented and punished. The definition and the range of animal abuse will be expanded to include treating negligence and neglect as the same as direct animal abandonment.

The provisions below do not exist in current law. However, in order to protect animals from their abusers, they are absolutely necessary as well as the ‘prohibition of cruelty to animals’ provisions.

This bill is particularly significant in that it provides direction and basic principles for farm animals and for those used in testing. These will be the cornerstone that can lead to more improved amendments in the future.

6. Only animal testing that follows animal welfare principles will be allowed

8. Restrict who can buy or sell animals

We cannot overemphasize the fact that setting strict standards for businesses dealing with animals is the starting point of protecting animals.

9. Qualification of animal protection inspectors and honorary inspectors will be raised and their responsibilities will be increased

This bill increases the severity of all penalties related to the ‘prohibition of cruelty to animals’ provisions. It also proposes to create joint penal provisions that hold not only individuals but also their organizations responsible. Furthermore, it seeks to educate and rehabilitate to prevent recurrence.

Please send thank you messages to the sponsors of this legislation and strong messages urging its passage to the Agricultural and Livestock Committee of the National Assembly! Please share this information with as many people as you can so that more people can help to pass this legislation!

There are issues that are not included in this bill because of the barrier of reality or in order to approach it with other laws. These issues include the complete ban of using animals for fighting, and the banning of and the regulation of painful and unnecessary animal testing for cosmetics.Provisions for the dog meat ban are also not included in this bill. However, if we can significantly strengthen the provisions to prohibit animal cruelty and increase the standards of animal welfare through the passing of this bill, then we will get closer to the substantive ban of dog farms and be able to bring forward the complete ban of dog meat trade.  Improvements to the APA and related laws can grow through your continued interests and petitions!

Click this button to see the email addresses and sample letters.

Sponsors of the amendment to Animal Protection Act at the press conference on Oct 1, 2013 at the National Assembly in Seoul, South Korea. We are deeply grateful to the national assembly members, Myung-Sook Han (Democratic Party), Sang-Jeong Sim (Justice Party), Jeong-Lim Moon (Saenuri party), Sun-Mi Jin (Democratic Party), who for the first time in our nation’s history have transcended political parties to sponsor this amendment to the APA. Photo: Newsis