Home / Blog / “Dog and I, and Animal Protection Law” by Changwon Pyo

“Dog and I, and Animal Protection Law” by Changwon Pyo

Mr. Pyo Chang Won is the chairman of the Animal Welfare Committee at the National Assembly of Korea and is one of the key men when it comes to the enforcement and legislation of the animal welfare laws.

Mr. Pyo recently wrote about his childhood and of how the dogs in his life were his best friends, and of how much joy they brought to him in those early years. He also wrote about witnessing gruesome cruelty against dogs by members of his own village and neighboring towns, and of the promise he made as a young boy that some day, when he was grown, he would protect the dogs and stop people from hurting them. Mr. Pyo shared his struggle as a grown man between national pride and wanting to keep his childhood promise to the dogs. His story has been excellently translated into English by volunteer Tami Jussman and can be read in its entirety below.

Mr. Pyo is now in a position to take the first step in fulfilling his promise and is doing so by introducing, in September, comprehensive amendments to the Animal Protection Law. These amendments, while not banning the dog and cat meat industry as that is simply not realistic at this time, will clarify the law and make punishment for violations more severe. This is an important gateway to ultimately ending the dog and cat meat trade in the future.

Our thanks and gratitude is extended to Nami Kim of SaveKoreanDogs who submitted a proposal to Mr. Pyo, detailing recommendations for changes to the Animal Protection Law. Her proposal can be read HERE. 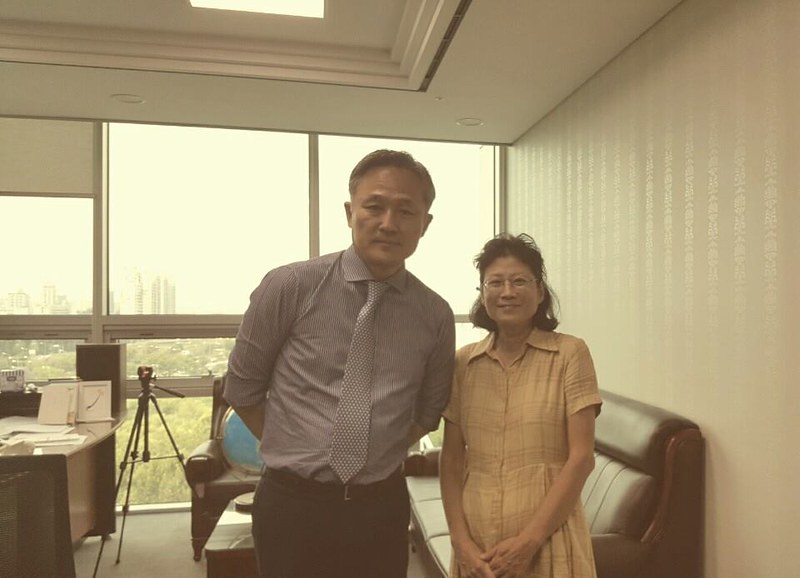 MP Pyo Chang Won is the chairman of the Animal Welfare Committee at the parliament of Korea. We met on the last Boknal day when I submitted my proposal to the amendments/new legislation. The English version of the translation is under my comments.

Recently, he wrote about his childhood and the dogs in his life, how he grew up with dogs, the cruelty done to the dogs in the village he grew up. He is introducing a comprehensive amendments to the Animal Protection Law in September. Here is English translation by Tami Zussman, the best translator Korean into English I know of.

“Dogs and I, and Animal Protection Law”

Growing up in Kyung Gi Do, Dong-Du-Chun, my very best friends were my dogs during those 5 years of my elementary school days.

One day my father brought home a puppy, a puppy I had been dreaming about for a long time. That evening, my family had a naming contest. Everyone liked my choice and we named her “Bonnie”. Bonnie was a very cute and pretty puppy with beige hair. Not long after, she fell very ill (distemper) and passed away. We buried her on a hill and made a small grave for her. I cried for several days mourning for her death.

Awhile later, my father brought home a German Shephard mix. We named him “Bear”. I was the youngest child in the family and he waited for me under the fence every day. As soon as I would come home from school, he would greet me happily nipping at back of my foot. He was very mischievous. He grew big as months went by and one day, he ate rat poison. He suffered a painful death and left my world.

Subsequently, I fell in love with my neighbor’s dog, “Dol-Yi.” He disappeared one day and I looked for him everywhere in town. I did my own investigation and learned from several witnesses that a “dog merchant” took him. I begged my parents to report him to police. A few days later, somehow Dol-Yi escaped and returned home. I rejoiced in such happiness reuniting with my dog. Fortunately, he lived a full life and died naturally as an old dog several years later. The grief I felt after Dol-Yi’s death was different from the griefs I felt from the other two dogs’ sudden untimely death by illness and accident. It was painful but I understood his death and it was acceptable.

However, in the same period I was experiencing love and loss for Bonnie, Bear and Dol-Yi, I also experienced an appalling shock. I witnessed several barbaric slaughters of dogs by lakeside and in the neighboring town. They hung a dog from a tree branch and beat it to a pulp, burnt its hair with a torch, hanging a bloody body of a skinned dog, etc. The scenes were very gruesome. On occasions, I verbally attacked the elders who were strangers to me and sometimes, I just cried alone.

As a young boy, I made a promise to the dogs; that when I grow up and have strength, I would take care of them, protect them and that I would stop people from hurting them.
Ahead of 1988 Seoul Olympics, there was a major public debate to ban Boshintang to avoid ‘International Shame’ in Korea. Laws banning Boshintang were introduced in the parliament at that time, but the strong opposition force based on opinions such as “Protection of Tradition,” “Individual Food Taste”, “Traditional Food” etc, caused me confusion. I also learned several of my own close relatives and family friends ate Boshintang on BokNal or for speedy recovery from a surgery or illness. It was very difficult for me to accept it.

After I became a police officer, I struggled each time I was invited by my superiors to a group meal. They were often held at a Boshintang restaurant. Fortunately, they had other food items such as Samgetang (Chicken soup) on the menu for people like me. I simply could not even try Boshintang. However, I kept my silence as a “non-Boshintang person” as I did not want to invade into other people’s “rights”.

While I was studying in England, I roughed up a much younger Caucasian British student with my Taekwondo after he greeted me with “Did you eat dog meat?” On another occasion, I was sitting next to an American couple in a plane in USA. They asked me where I was from. Upon hearing my reply, after an initial hesitation, they asked me “Do you eat dogs?” To that I replied coldly, “I only eat hotdogs.” There was another incident. I was attending a seminar in Sydney, Australia. I came upon a group of people protesting against Korea’s dog meat consumption. They were holding horrific pictures. I saw a young Korean girl arguing in tears with the protesters in limited English, so I joined in to help this Korean student. She ended up leaving still in tears. Experiencing these incidents made me feel more protective of my national pride and countrymen. However, that instinct became a wedge between myself and earlier promise I made to the dogs.
Dear Boshintang related Business owners, Meat Dog Farmers, and those who enjoy eating Boshintang: I do not hate, criticize or demean you. There are differences between us, however, I respect the differences.

However, although the dogs are only animals, they are sacred living beings. They are our children’s and our closest friends and companions. We cannot ignore our friends’ pain, suffering and severely cruel reality.

It is my belief there is absolutely not a single excuse justifying the inhumane and extreme cruelty inflicted upon the dogs during the breeding and slaughtering process.
It is my further belief that a society that provides protection for rights of a dog’s life will only provide better protection of rights of human.
The introduction of my amendments to Animal Protection Rights is my first step to fulfill my promise I made to the dogs as a young boy.
I am mindful of our society, reality of our citizens’ lives and their opinions. Accordingly, I intend to move step by step, strategically and continually until I fulfill my promise.
Thank you for reading this long statement.