posted by KoreanDogs.org team on April 15,2016 in Action Alert, Campaign

Below is translation of Ms. Federica Salsi, Council member of City of Bologna, Italy, blog post on April 14 updating her effort in support of our campaign: Friendship City Campaign – Seongnam, South Korea – Bologna, Italy Click HERE to see her blog in Italian.

Some time ago, an announcement on Twitter informed me of the terrible mistreatment of animals, especially dogs in Korea. As Mayor Merola of Bologna had just signed an agreement with the Korean Mayor of the City of Seongnam, I asked him to promote a rising awareness and concern for the respect of animals.

The first response (from Seongnam) was disarming: “At the moment there are no specific actions.”

Meanwhile, an online petition had begun collecting thousands of signatures in just a few days, and the image of Bologna did not fare well from this situation. So I decided to re-consult the Mayor thinking that perhaps he was underestimating the defaming situation that the image of Bologna was being exposed to.

Within two months we received a reply from Mayor Merola (evidently the continuous spreading of this fact on social networks has worried him… and the electoral campaign sounds great for that!).

He informed me that he had written a letter to the Korean Mayor “to bring to his attention the theme of the mistreatment of dogs and cats for its own jurisdiction.” I have asked to be updated on a possible answer.

Following is the full text of my interpellation and the Mayors answer.

– Given that:
Monday, November 16, 2015, the Mayor of Bologna Virginio Merola and the Mayor Lee Jae-Myeong of Seongnam, Republic of Korea, signed a cooperation agreement to promote an effective exchange of economic projects, cultural and technological, both in public and private sectors;

– Also said that:
I submitted an interpellation on 30/11/2015 n. 380043/2015, Prog. n. 119/2015, to ask to the Mayor if he meant, in the context of the protocol signed with the Mayor Jae-Myeong Lee Seongnam, Republic of Korea, to promote an effective exchange of cultural projects, to promote also activities, awareness and information about the care of animals, especially dogs and cats.

In response to the above interpellation, the Deputy Mayor Rizzo Nervo stated that “At the moment there are no specific actions”;

Whereas:
January 13, 2016 the Koreandog Association (https://koreandogs.org/) launched a petition (https://www.change.org/p/bologna-italy-mayor-virginio-merola-tell-friendship-city-seongnam-south-korea-that-we-re-opposed-to-the-torture-and-consumption-of-dogs-and-cats) to ask to the Mayor of Bologna, Virginio Merola, to tell City Partner Seongnam, South Korea, his opposition to torture and consumption of dogs and cats.

This petition in only two days has raised almost three thousand signatures from supporters around the world; Mayor, Aldermen and Councillors are receiving numerous emails to sensitize Mayor Merola.

I asked:
– To consider that an agreement on cooperation and friendship with a country, where dogs and cats are routinely tortured and killed, may harm the touristic and commercial image of Bologna.

– To consider that the administration should take a clear stance against the torture of dogs and cats in Korea urging about that to the Seongnam Mayor.

LETTER OF THE MAYOR MEROLA – ANSWEAR TO FEDERICA SALSI:

I wrote to the Mayor of Seongnam to inform him about the mistreatment of dogs and cats in his territory. Reminding him our protocol of cooperation signed the last autumn, about economy, culture, and education. I informed him about the international petition change.org that shows the routine tortures of dogs and cats for human consumption, in particular what happens inside the Moran Market, in the City of Seongnam.

So I asked to know his position about that, highlighting that in Korea there is an animal protection law (approved in the 1991, modified in the 2008) and that the law absolutely prohibits the maltreatment of the animals. My hope expressed to the Mayor of Seongnam is that our collaboration and cooperation won’t be damaged by the international concern for these animals. 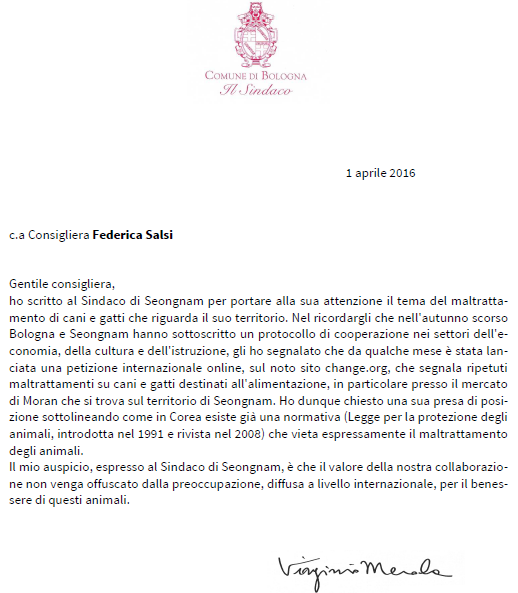 Letter from Mayor Merola to Ms. Federica Salsi on April 1, 2016