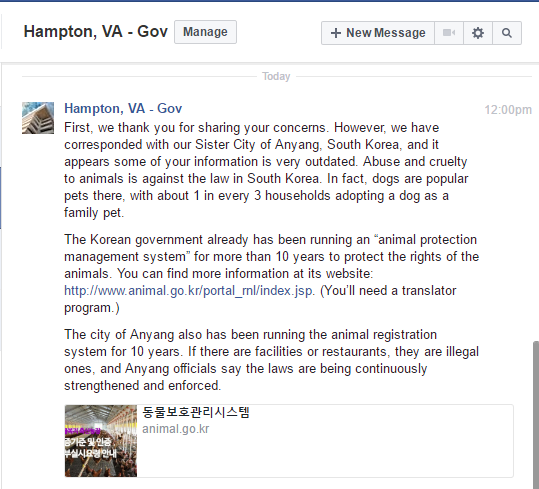 We want to thank Mayor Tuck and his colleagues for taking swift action; once again, though, the response they received from the Korean authorities was the standard one of stating that ‘abuse and cruelty is against the law in South Korea’ and that ‘dogs are popular pets’ etc. Statements which are true enough, but, in addition to pointing out that Koreans consider meat dogs to be completely different from pet dogs, we do not see the response given to be relevant to our concerns about dogs in the dog-meat trade, which is thriving and in which these animals are routinely kept in inhumane conditions, then brutalized and tortured their entire lives.

Mayor Tuck’s office has accepted the advice that the Anyang officials say their laws are ‘continuously strengthened and enforced’ and inferred that any facilities or restaurants [carrying out dog-meat trade activities] would not be legal ones. So we would like to make Mayor Tuck and his colleagues aware of a simple internet search we carried out recently, on Naver business directory, a Korean search engine, using the search term ‘안양 보신탕’ in Korean, which translated means ‘Anyang Dog Meat Restaurant’, which clearly listed 70 results in the vicinity of Anyang alone (with what quantity of dog farms in the neighbourhood to supply this demand?). Are these 70 results just advertising errors, then, or is this an official cover up.

So, once again, we are contacting Mayor Tuck to ask him to reconsider Anyang’s statements, and to view the evidence. The laws in Korea, concerning the cruelty and abuse inherent in the dog-meat industry, are neither policed nor enforced; Dr Ann Yong-Geun (self-named Dr Dog Meat) is quoted as saying: in this article: August 2011, the laws are merely put in place “to shun criticism from foreign countries.”

Click HERE or see below for Mayor Tuck and the City Council members’s email addresses!

Dog and Cat Cruelty and Abuse in Anyang, South Korea, for the meat trade.

We would like to thank you very much for responding to our petition asking for you to make contact with Mayor Pil-Un Lee of Anyang, to urge him to put an end to this illegal trade and thereby the cruelty it embodies.

We note, with sadness, however, that the response you received from their city offices is completely disingenuous in that they are simply confirming that these laws are in place in their country. What they appear to have failed to deny is that these laws are being transgressed throughout South Korea on a daily basis: the collected evidence speaks for itself, for example the filming by the Korea Observer, published on Youtube, the clip of which was referenced in our petition.

This video, confirming such transgression, is not an isolated example: many pictures, videos, and witness testimonies from caring South Korean Citizens, are available for public viewing on many forms of social media.

The following laws are in place in South Korea, but they are being transgressed all over the country in many ways, including in Anyang; for example:

The slaughter of dogs by electrocution is a violation of Animal Protection Act, Article 8, Section 1, Clause 1. Inflicting injury or death to any animal by the following means: battery by tools, exposure to drugs, exposure to extreme heat or fire, electrocution, and drowning is subject to legal punishment. Therefore, the routine slaughter of dogs by butchers and farmers by these methods is in violation of the Act. Further, electrocution as a method of slaughter is internationally recognized as an inherently cruel method of slaughter and banned globally.

Slaughter of dogs from unauthorized slaughterhouse is a violation of Livestock Products Sanitary Control Act, Article7 Section 1. The Livestock Products Sanitary Control Act, states that dogs are officially recognized and classified as “animals” that are “prohibited from being slaughtered and distributed as food for human consumption”. Therefore, those vendors operating dog slaughterhouses are operating outside of the parameters of the law and in violation of the law.

Slaughter of dogs for his/her own consumption is a violation of Animal Protection Act, Article 10. The intent of the Act is to ensure that no animal is slaughtered in a cruel or revolting manner, and shall be free from unnecessary pain, fear, or stress during the process of slaughter. Therefore, only humane way of slaughtering dogs would be by euthanasia (lethal injection). All currently practiced methods of slaughter by butchers, farmers and traders excludes euthanasia as a method of slaughter, therefore they are all in breach of this Act. This is also a violation of LIVESTOCK PRODUCTS SANITARY CONTROL ACT Article7 Section 1 Clause 2. According to the Livestock Products Sanitary Control Act, slaughter of animals for his/her own consumption is allowed only for the livestock animals that are publicly announced as classification of livestock in the Livestock Products Sanitary Control Act and dogs are not classified here.

Display and sale of dog carcass in traditional outdoor markets is a violation of Food Sanitation Act, Article 4, 5. Violation of laws banning sale of harmful food due to the contamination from unsanitary and illegal slaughter of the animal and display of the dog carcass. For example, dog carcass are routinely contaminated by microorganisms that cause human diseases and food poisoning which can lead to serious and life threatening health complications. There are also strict laws which ban the sale of meat from sick animals, due to the fact that there is no quality control or formal monitoring of slaughter practices in the dog meat trade it is very likely that violation of these laws is happening routinely.

Dog meat restaurants’ sale of dog meat soup made with dog carcass from an unknown source is a violation of Food Sanitation Act Article 44 Section 1 Clause 1. Uninspected livestock products must not be transported, stored, displayed, sold or used for manufacturing or processing of food for human consumption.

To illustrate the scale of the dog meat business in Anyang, a simple search for “Anyang Dog Meat Restaurant” on a popular search engine in South Korea (called Naver business directory search) produced a list of 70 search results in the vicinity of Anyang alone. This proves just how many dog farms and slaughterhouses there must be in, or in close proximity to that city, to be able to supply meat to all of these restaurants (and how many others?).

Mayor Tuck, we, therefore, urge you to once again review the evidence, and to do everything in your power to help bring an end to the dog meat trade in your Sister City, Anyang.
Sincerely,