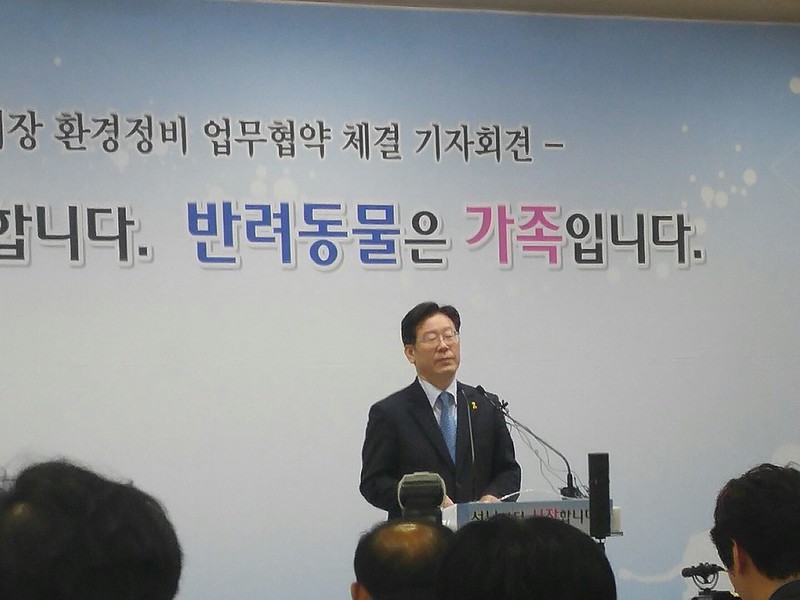 Photo, from SaveKoreanDogs: Seongnam Mayor making a speech at the press conference, after the Agreement Signing Ceremony. The banner hanging behind him states “companion animals are our family”.

We received a copy of the following memorandum from SaveKoreanDogs.
It was sent by the City of Seongnam requesting publicity for the ceremony that will be held for the Agreement reached between the City and the Seongnam Moran Market dog meat vendors: that they will remove all displays of dogs, and stop the slaughtering of dogs within Moran Market. However, before we pop the champagne, we must make it clear that this agreement DOES NOT STOP THE SALE OF DOG MEAT at this market. It only bans the display of live dogs in cages, as well as on site slaughter. Therefore slaughtering will still continue elsewhere, outside of the Moran Market, and these dog meat vendors can continue to sell dog meat.

Nevertheless, being unable to display live dogs or carry out on-the-spot slaughtering will definitely have a negative impact on their business. As such, this is a big step forward, as well as a victory for the countless animal activists who have campaigned for many years to shut this place down. Much more work and campaigning will be needed to stop the selling of dog meat altogether at this market, as well as throughout Korea.

Below is a translation of the memorandum:

Regarding: Request for public relations regarding the Moran Market environmental modification.
1. This is in regards to Policy Planning Division – Number 21387 (2016.12.12.).

2. Moran Market, which has many dog vendors, used to be on the outskirt of our city. However, despite the fact that it is now in the center of the city, due to the development of the city and the transportation, it still displays dogs, goats, chickens etc., for sale, causing numerous civil complaints about noise, foul stench, etc. Therefore, as a result of continuous communication between the city and the Moran Market Trade Association, we have reached an agreement on a “Moran Market Environmental Modification” and will be holding an agreement ceremony below. 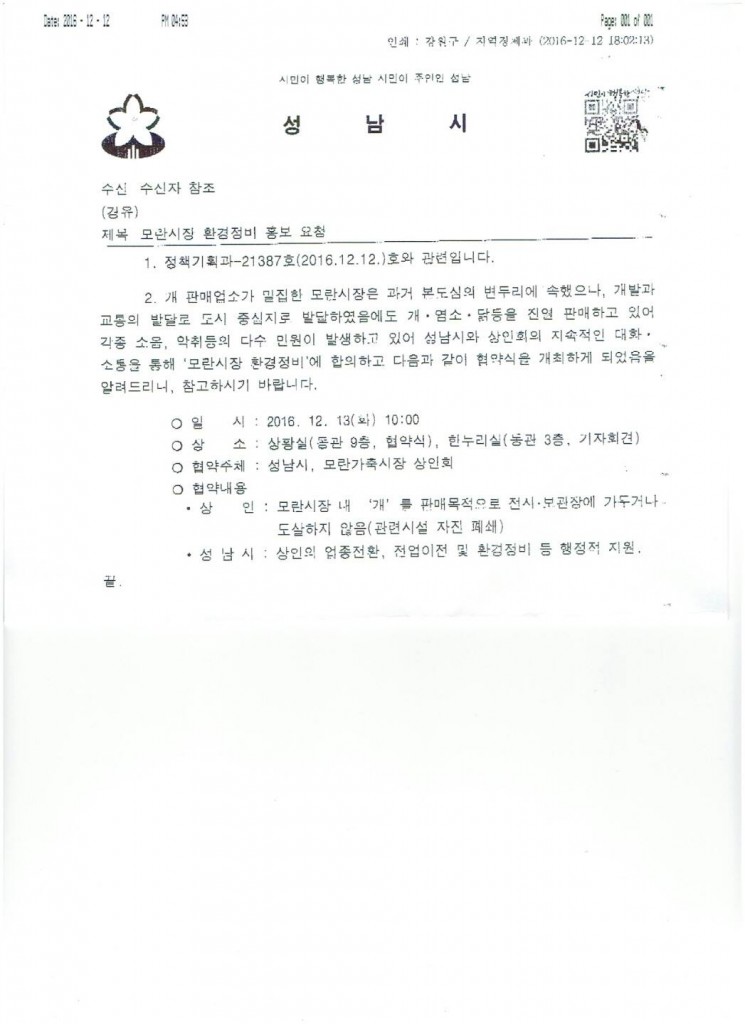 Video, from SaveKoreanDogs: Mayor Jae-Myung Lee making a speech. He states “I receive many, many emails in English and foreign languages from all over the world, it’s all about the dog meat market and slaughtering. It’s time we bring changes in the city.”

Video, from SaveKoreanDogs: Representative of the dog meat vendors is answering questions. 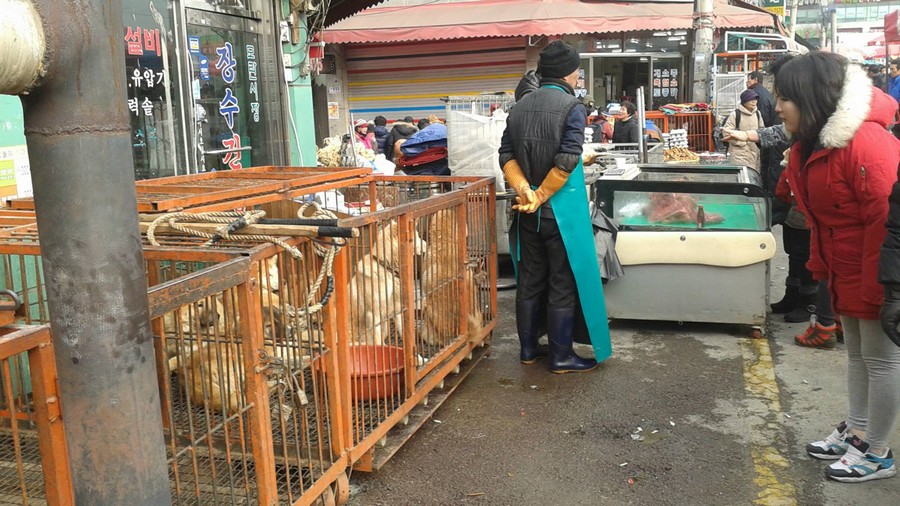 Click HERE to read news by The Korea Herald, “Illegal dog slaughter to be banned in Moran Market”

Below is the translation of content of the Agreement, including the timeline for execution of the terms.

Market Traders association: Will not display dogs in cages for purpose of sale, will not slaughter dogs within Moran Market. (Related facilities will be taken down)

Host a public forum for citizens and government.

Moran Market, which has many dog vendors, used to be on the outskirts of our city. However, despite the fact that it is now in the center of the city, due to the development of new cities such as Bundang and Pangyo as well as development of transportation, it still displays dogs, goats, chickens etc., for sale, causing numerous civil complaints about noise, foul stench, etc. Therefore, as a result of continuous communication between the city and the Moran Market Trade Association, we have reached an agreement on a “Moran Market Environmental Modification”. This project’s objective is to foster a more pleasant city environment. 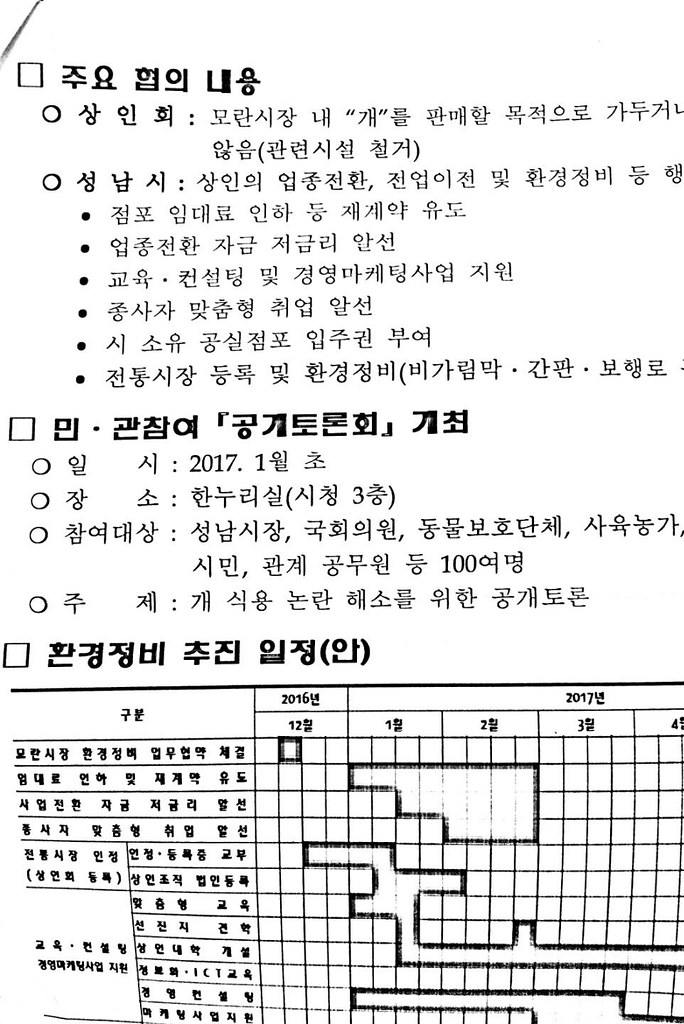 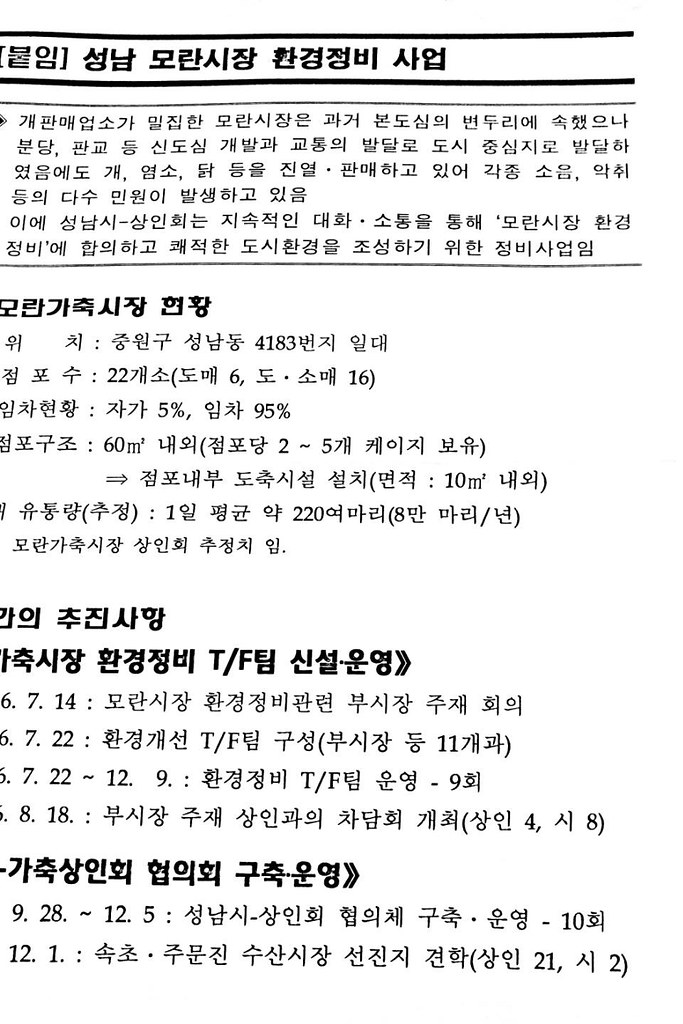 [Update February 26, 2017]Seongnam has begun removing slaughter facilities from the Moran Dog Meat Market. Dogs will be slaughtered somewhere else.

The Korea Herald reported that the “Seongnam City Government began Monday a process to remove butchery facilities from South Korea’s largest dog meat market, but was shortly interrupted by angry vendors who went against the removal” with a video from the scene.

Nami Kim with SaveKoreanDogs.org posted on Facebook: “It is Mayor Lee who is so determined to remove the slaughter facilities at the Moran dog meat market. Meanwhile, the business will go on as usual until the mayor comes up with some very attractive alternatives. It was at 10 am this morning when the chief made it official, despite some vendors against the idea and shouting and interrupting the press release. The vendors/butchers will have to buy the meat from wholesalers somewhere else. There is talk that this market will be shutting down, which means fewer buyers will come to buy the meat here. This is one way of reducing the consumption of the meat. It was a good day for the dogs. All baby steps will bring a huge leap one day, just like the Berlin Wall.”