Life of hell for “meat” dogs in South Korea

posted by KoreanDogs.org team on June 7,2012 in Uncategorized

In South Korea, dogs are deprived of everything that is natural to them. From birth to death, they are imprisoned in deplorable tiny excrement encrusted raised up wire cages, fed rotten garbage with no protection from scorching heat of summer …and freezing cold of winter with no water, medical care or human interaction. This is a hell on earth for these dogs and they have to endure the life of utter misery and agony just to meet their ghastly fate of being electrocuted, hanged, beaten, burned, sometimes alive,…

It is hard to believe that a nation such as S. Korea which is one of the major economic power and boasts the highest education level in the world is still committing this type of barbaric and inhumane atrocity in this day and age. But for the millions of dogs and cats that are being slaughtered each year in South Korea’s markets, slaughterhouses, restaurants, dog farms and in private residences, it is a tragic reality that they can’t escape from.

If South Korea wants to join the civilized nations and be respected not only as a nation of economic miracle but as a nation of conscience, they need to strengthen their animal protection law and ban the dog and cat consumption once and for all. This has been going on way too long and it’s time for their government to take a moral leadership for their citizens. Not only does this benefit the animals of S. Korea but it will further their economic interest in the world because caring people of the world will not stop speaking out against S. Korea and boycott their products until this abomination comes to an end. 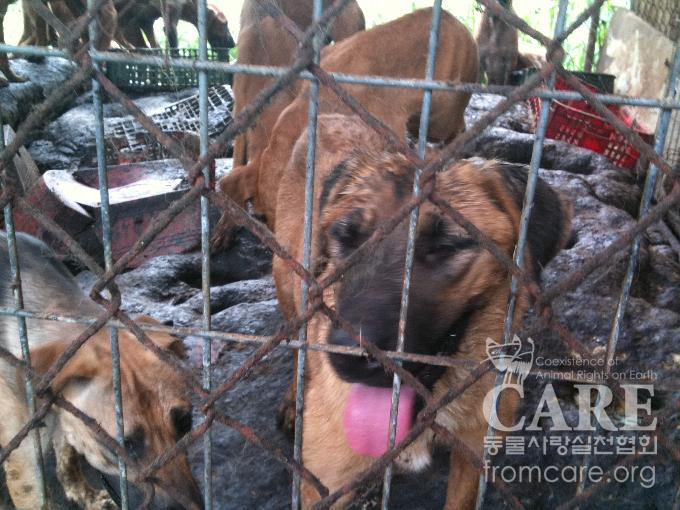