Home / Blog / How much is a fair price? Disputes over price of dog meat goes to the Korea Fair Trade Commission

How much is a fair price? Disputes over price of dog meat goes to the Korea Fair Trade Commission

posted by KoreanDogs.org team on May 7,2015 in News

This is a translation of Korean news on Channel A, reported on April 2, 2015: How much is a fair price? Disputes over price of dog meat goes to the Fair Trade Commission 적정가는 얼마? 공정위로 간 ‘개고기 가격’ 분쟁

How much is a fair price? Disputes over price of dog meat goes to the Korea Fair Trade Commission

Boshintang, or dog meat soup, is a food that often provokes controversy in both Korea and abroad due to the cultural differences.

A disputes over the price of dog meat used for the soup was recently brought to Korea’s Fair Trade Commission(KFTC).

Reporter Kim Min-ji has the story.

On March 30, Lee OO, owner of a dog meat restaurant in Jungnang District, Seoul, accused Korea’s National Animal Husbandry Council and the Korea Meat Dog Farmer’s Association of price-fixing and filed a complaint with the KFTC.

She accused them of encouraging across the board price-fixing.

“The National Animal Husbandry Council decided amongst themselves that they will not supply dog meat under a certain price.”

Lee OO complained that the two organizations suddenly raised the price from 5,000 to 6,000 Korean won per 400 grams of dog meat to 7,800 won. The Council set the price at 6,300 won, but after distribution prices are added in, restaurants end up paying about 40-50% more than before.

[Phone interview] Lee OO, Boshintang restaurant owner
“How can ‘meat dog’ be more expensive than Korean(Hanwoo) cow? Now that the prices have gone up, it’s caused business to suffer two, three times more and is causing a huge loss. These days we don’t make any money from running the restaurant.”

The Council claimed, “We are not fixing prices. We’re normalizing the prices of dog meat that up until now were being sold at unreasonably low prices by the distributors.”

As dog meat is not categorized as livestock, currently they are not being slaughtered at slaughterhouses conforming to legal requirements.

In addition, the cultural debates regarding the very act of consuming dog meat seems never ending.

The KFTC has stated that they will be delving deeper into the facts of the case and will conduct additional investigations for the price fixing complaint received.

Regarding the legalization of dog slaughter, the government has not taken a definitive position stating that a national consensus is necessary. As such, they are eagerly awaiting the KFTC’s decision.
This is Kim Min-ji with Channel A News. 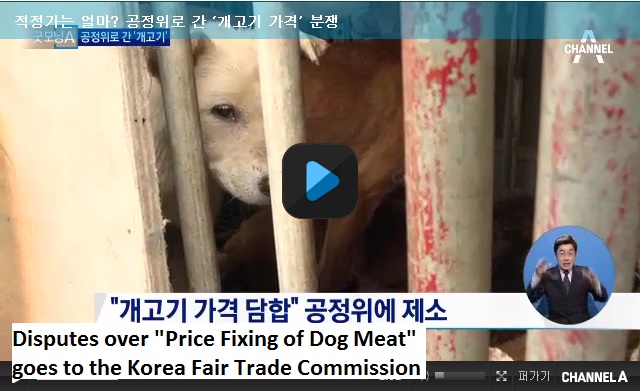