We received below response from the Mayor of Turin Chiara Appendino. We are grateful to the Mayor and the City of Turin for responding to our petition so quickly and for their support of our campaign.

Below is our thank you email that we sent to the Mayor and the city council members of Turin on September 28, 2017:

Thank you for responding to our petition so quickly and informing us that the City of Turin has no partnership with Gwangju since 2002 and no further collaboration is planned for the future.

We hope you will follow our efforts in changing the perception of dog and cat eating nations, like South Korea. We are a “grass roots”, hands-on group of people from many countries who dedicate ourselves to ending the cruelty and atrocities in the dog and cat meat trade. I am a resident of California, but continue to work, not for profit, but with love and compassion, for the Korean animals.

Mayor Chiara Appendino of Turin: Tell Friendship City, Gwangju, South Korea, That We’re Opposed to the Torture and Consumption of Dogs and Cats.

In Gwangju, there are countless dog farms, slaughterhouses, markets and restaurants where the dogs, who have been tortured their entire lives, end up being slaughtered in the most inhumane ways, such as by electrocution, hanging or beating; and then thrown into boiling water – sometimes while they are still alive. In many places, dogs are being killed in full view of other terrified, caged dogs; and this takes place in public and in broad daylight. In addition, many abandoned and stolen former pets end up in this industry and are subject to the same cruelty.

Shown below are two search results on Naver (the most popular search engine in Korea) – the first one was for so-called “Health Centers,” which commonly sell dog elixirs and cat elixirs (also known as dog soju and cat soju), and the second one was for “dog meat restaurants”.

The searches resulted in dozens of 403 Health Food Shops and 55 restaurants in the vicinity of Gwangju.

Even if half of these ‘Health’ Centers and restaurants serve dog and cat ‘ingredients’ in one form or another, imagine how many dog/cat slaughterhouses must be in the vicinity of Gwangju to supply these outlets. 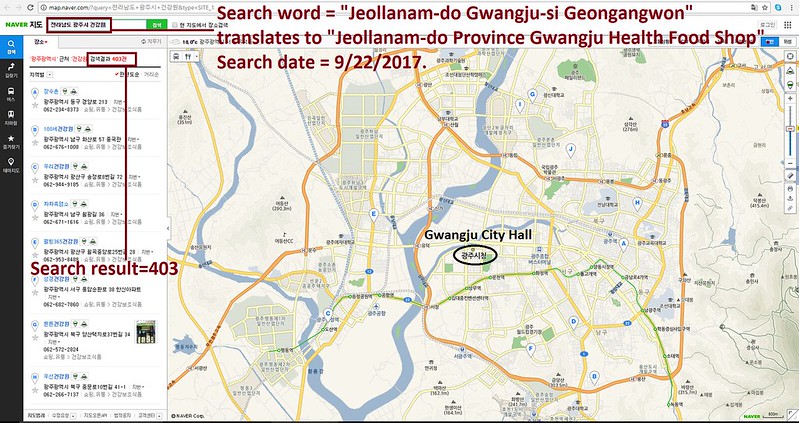 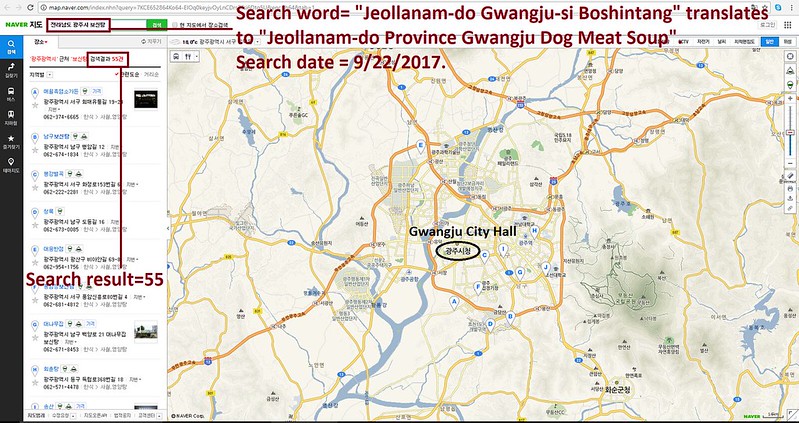 No matter where you live, PLEASE SHARE these actions with your friends, especially those who live in Turin!