Home / Blog / Major Victory! Another dog farm shutting down and 300 puppies to be saved by the Nami Kim Team.

Major Victory! Another dog farm shutting down and 300 puppies to be saved by the Nami Kim Team.

posted by KoreanDogs.org team on May 26,2016 in Nami Kim Team, Rescue

It is heartening to be able to report some breakthrough (good!) news: as a direct response to our Sister City Campaign to Bakersfield and Mayor Harvey Hall, who then contacted Bucheon City, and – of course – also as a result of all Nami’s hard work, Bucheon has taken positive action to try and end the dog meat trade in their City.

This is such important news, as we are hoping for the ‘snowball’ effect, in that Bucheon will lead the way for other cities to follow up with similar action.

Nami has posted several videos of their rescue with the city’s Animal Welfare Official on site with them, at the closing down of this dog farm. His physical presence on site will be sending out a very clear message to others, that this action has official recognition and support.

Nami won’t be able to re-house all of the dogs from this farm, though, as they don’t have enough space; they were hoping that City will be able to house them, but the City has no budget for this and no space in their shelter either.
The Council has recently passed a new animal protection law bill, which is another indication that this City is taking it seriously.

Nami has also posted a picture of the Council Members, to whom Nami and her team presented a Token of Appreciation. They certainly deserve recognition!

5/26/2016. Homework To Do.
The butcher will be hired by us for a month to help with the relocation of the 300 + dogs by utilizing his truck for transport.

Together with the city’s job search center we will assist the butcher to find an alternative vocation if he doesn’t want to be a truck driver after a month.

Our shelter will be ready for 100 dogs in ten days when the kennels are built. We are still trying to secure more boarding for the 200+ dogs. I paid the butcher couple $2,000 to look after the dogs till we are all ready to pick them up.

Estimated medical expenses for all the dogs at three vets are enormous, I can’t even come up with a ballpark figure yet. The basic veterinary care includes such services as deworming, three vaccinations and blood tests for heartworm and viruses plus additional treatment. We have secured three vets in Bucheon and Incheon city. The 36 pregnant dogs will be the first ones to be seen by the vets. The dogs are mostly Jindo mix, other than the 28 big size dogs, approximate ages 3 to 7-8 months, small size excluding those just born. Those with no health issues will be put on the adoptable list at www.namikim.org. This means we will need many homes in US and Canada. It’s unfortunate the quarantine regulations in Europe, UK and Australia requires six months.

We took a big step taking in the largest number ever rescue. We will take this step by step until each dog celebrates a happy ending this year. Thank you all! 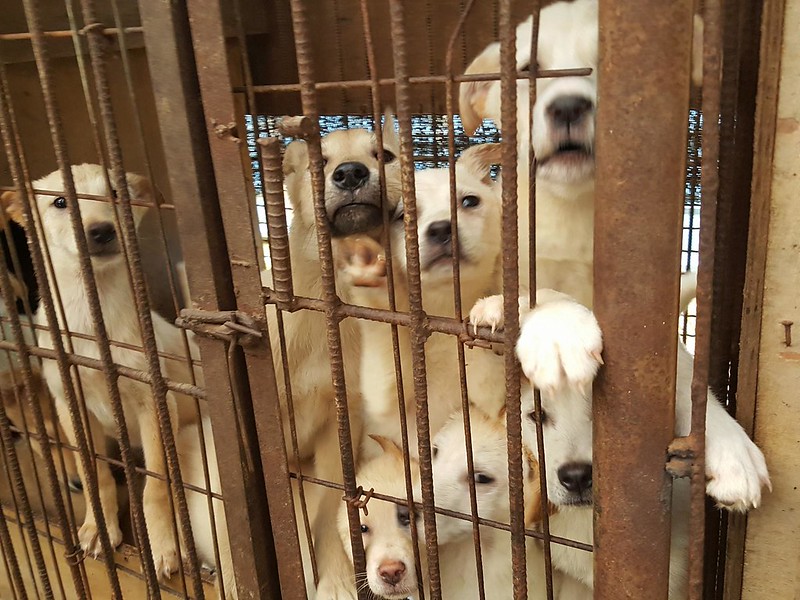 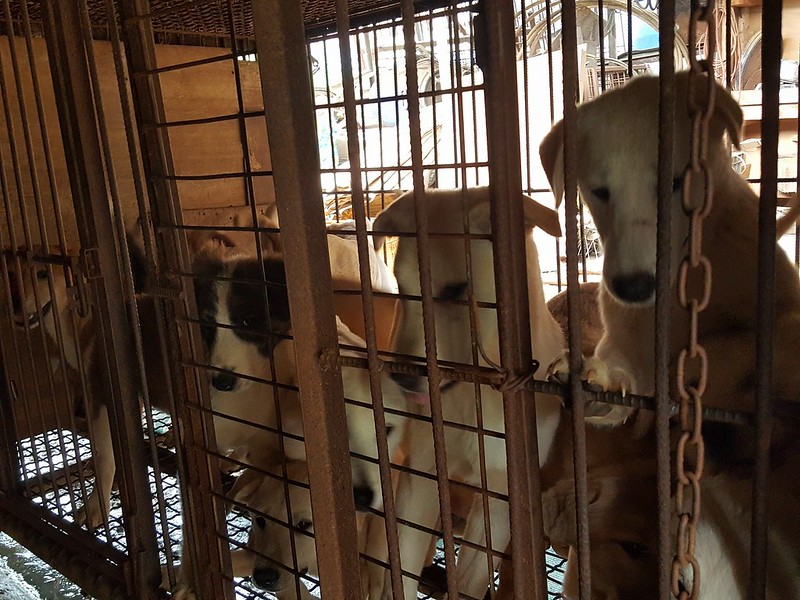 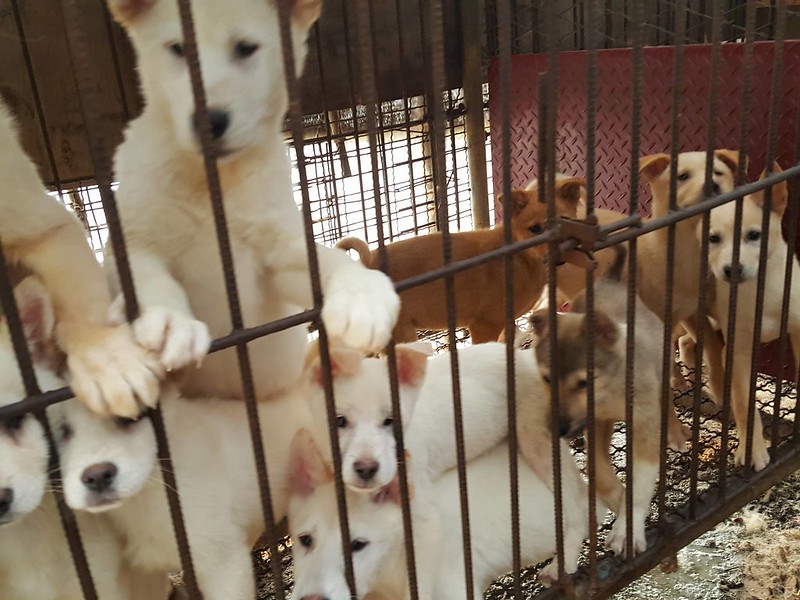 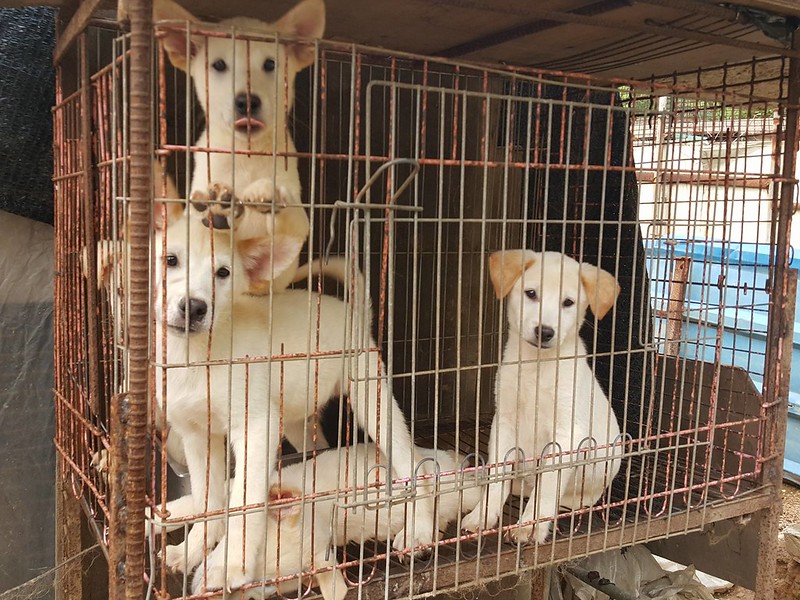 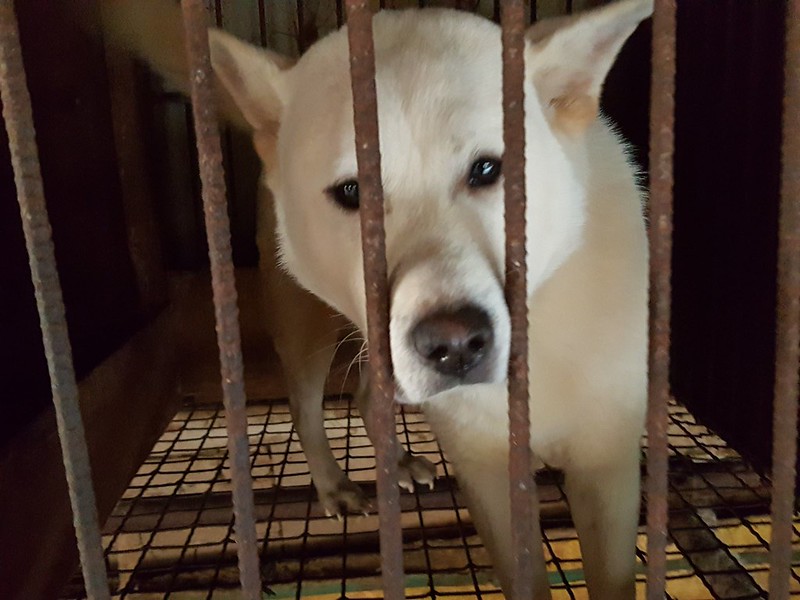 Click HERE to see more photos of puppies in this farm!

5/25/2016. The dog farm has three buildings as shown in the video housing 300+ dogs. At the dog farm 36 dogs were found pregnant and some had just born babies totaling 54. This is such a heavy burden for a small activist group like us working on the front lines.

I want to make sure all the dogs are given proper veterinary care in the future but it is the vet bills that concerns me.

The dogs were so agitated with our presence. There are over 300 dogs that will be surrendered to us in a months’ time; 100 dogs will arrive at the new rescue facility and 200+ will be relocated to other boarders in the vicinity.
https://www.facebook.com/savekoreandogs/posts/658975294252534

Four dogs headed to the Bucheon city shelter and three dogs with injuries were sent to Dr. Kim today. The rest of the dogs will come to us in a months’ time. Meanwhile, the couple will feed the dogs with the dog food that we arranged to be delivered to them tomorrow. I think I can announce victory. I personally wanted to make this happen to turn the city in a “dog meat free zone”

5/25/2016. The butcher signed the legally binding letter of “renunciation” with both party’s signature and finger print on the paper.

No more slaughtering dogs but laughter we hear here now. In fact, this butcher is the very first one not violent at all whereas in the past most butchers would come to me with knives and threaten me.

Today I paid them cash US$2,000 for surrendering the 300+ dogs. We will find an alternative for the former butcher’s livelihood. Why do I trust them? During the last two weeks while we kept our eyes on them not a single dog was let out of the farm and the head count remained the same.

Mr. Kim, the city official who was present through the whole process, was so pleased to see this happening. We needed this so badly to designate the city a “dog meat free zone” in the future. 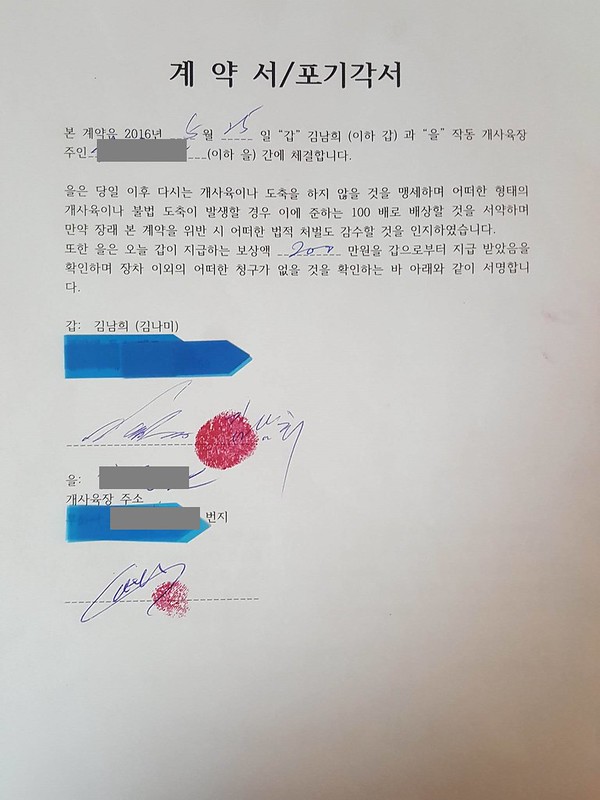 5/25/2016. At last we came to an agreement today. They signed the paper in the presence of city official Mr. Kim.

Here I am telling them how the city can assist them with an alternative livelihood. I myself personally experienced this time that they are the first nonviolent butcher.

5/24/2016. Update – 300+ Dogs Dog Farm.
We are currently trying to secure a few boarding facilities to relocate 200 dogs while our new shelter is under construction to house 100 dogs. While waiting for the butcher to show up we found a room with about a dozen Maltese and small size dogs.

I’ve been negotiating with the butcher using the tactic of “would you pay all the heavy fine or surrender the dogs to us?” It didn’t work. Instead he wants to turn this into a chicken farm. I told him, “nothing associated with slaughtering is allowed.” I offered him US$2,000 for all the 300 (now more dogs added with the new finding) and also offered him a job. He has a truck so we are thinking of hiring him on part time basis. He is willing to take the job offer from me. Please help us to get all the dogs.