posted by KoreanDogs.org team on August 12,2013 in Campaign, News, Petitions

On Aug 6, approximately 50 residents of Sindeok 3-ri gathered at the village senior center and delivered to the local government official of Taean-gun, an opinion of the entire residents’ strong opposition to the opening of dog farm Park OO is trying to push forward.

On this day, the residents protested strongly to the Taean-gun district office that issued the dog farm permit, “Do you think it’s ok for the entire residents to suffer damage because of one person?”

Dog farm owner Park OO began operation of dog farm in 2000, gradually expanding his operation with as many as 1,000 dogs at one point. In this process, he was subject to judicial disciplinary actions by the government authorities when caught many times discharging dog manure into rivers without permission.

Park OO disposed all his dogs and stopped the dog farm operation in 2011 due to personal reasons. However, conflict with the village residents began last July when he applied for a permit to extend his dog farm in order to restart his operation. Hereupon the resistance started spreading with the residents submitting civil complaints of opposition.

Resident Kwon OO said, “Dog farm owner polluted our river with unauthorized discharge of animal manure during the past 10 years and we suffered emotional stress from the foul odor and dog barking noises from the farm. We cannot go back to that nightmare once again” and “if the dog farm permit is not revoked, we are ready to protest in front of the District government office”.

Currently, Sowon-myeon, Sindeok 3-ri village is a home to 30 families (70 residents) and after the dog farm closed down, with its beautiful landscape it has been very popular among the urban dwellers with 6 families from Seoul and Incheon area moving into this village each year. 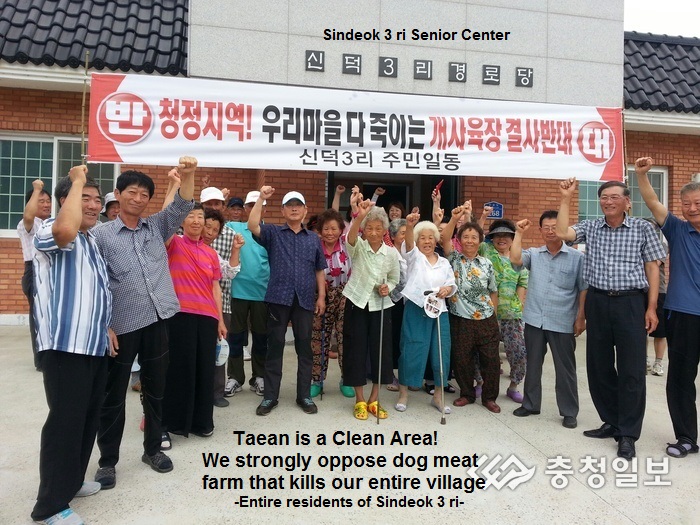